A few days ago, I received this email; 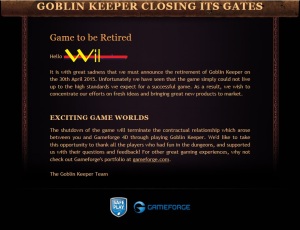 So Gameforge has decided to close a game that we here at the Torch did quite a bit of stuff on. You also seemed to like the stuff we did. At least according to the ever fallible view numbers.

I and Morph played it a whole bunch but I think both of us have played it slowly less and less as of late. At least, that’s what happened with me. It sometimes happens, mostly eventually, to online games. While it’s always sad to see an online game or service you’ve spent quite an bit of time with close is gates, you have to admit its had a good run.

From the beginning, Goblin Keeper has had a rather turbulent history just from it’s former form, “Dungeon Overlord” published by Sony Online Entertainemnt. It even ended up getting talked about by populer interneters like a certain Mr. Bain, (AKA Total Biscuit) back in 2011.

Even that wasn’t enough to help the game survive. That year, SOE sold the game to the the games developer, Night Owl Games, who said that they wanted to improve the game and keep it going.

This is were things get a little fuzzy for me. At least with direct information anyway. What I can garner from some digging is that at some point soon after the sale, Gameforge stepped in as publisher mostly for the EU region and re-named it Goblin Keeper. Then in early 2014, it was pulled from other sites and from Facebook, Night Owl Games folded taking Dungeon Overlord with it soon after, (apparently because of a lack of game updates if forum posts are to be believed) so Gameforge took over the game from that point on. At least that is according to what information I have found. Messy and unclear does not describe this area of its history. It feels like the period between mid 2011 and late 2013, in regards to the game, nothing was written down.

Anyway, from early 2014 Gameforge was the runner of the game and things seemed to go swimmingly. At least until now. Sounds like the game was to intensive to work on in regards to what they were getting out of it from what the shut down statement was saying.

“…the game simply could not live up to the high standards we expect for a successful game. As a result, we wish to concentrate our efforts on fresh ideas and bringing great new products to market.”

They do a bunch of games so they have stuff to fall back onto (some would say more popular games too,) so this is more the final end to the Keeper saga then the fall of studio or company.

The gates of Goblin Keeper will be locked on the 30th April this year.

8 thoughts on ““Goblin Keeper” Shutting Down”