It wasn’t a hands on but it was pretty enlightening in regards to the deeper mechanics of the game. As shown at E3 you play as John, a recently turned doctor who rises from a mass grave on the fields of World War One and the returns to Spanish flu infested, early 1900’s London. As the game progress’ and you level up, you gain more vampire based abilities, like a smoke dash/teleport that was both shown at E3 and at Gamescom. But what came as interesting news was that how you play effects the game in more then the usual sandbox unlock all the districts ways. 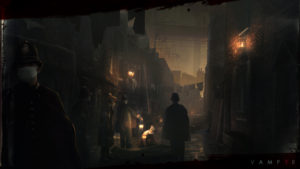 There is a choice mechanic built into the game which acts as the core affecting block. There is an aspect of the old style do bad things and be called evil mechanic, but they’ve attempted to break away from the binary good vs evil choice as in the ‘INfamous’ games. Instead they’ve tried to make it more of, as one of the developers called it when I talked to him, a ‘level of arsehole‘ mechanic. As choice mechanics go, they do seem to be trying to do it the right way. Being and outright ‘evil’ character makes the game easer in the short term but punishes you in the long term. But being outright ‘good’ stunts your short term growth so making the game harder but gives you more district control. So being ‘evil’ makes the game easer in the short term compared to being ‘good’ but your punished later for it. The way they do that is by making the most efficient way to get level experience is to kill and drink the blood of civilians, the random NPC’s that doesn’t include wondering enemies. But if you kill to many civilians the average health of a district, the districts being the same as all sandbox style games, drop. If they drop to far they fall to the ravages of the games lead bad guy/enemy-pox, a primal ‘kill all life’ version of a vampire/zombie plague. This, in turn, effects your ending. You kill to many civilians and you are dammed and have dammed the town to the vampire’s plague. They didn’t mention what the other end of the spectrum was but its safe to assume that it will fall into either the Blade or Interview with a Vampire style of ending. Your either cured or you separate yourself from humans and live in eternal angst. Anti-hero endings my guess.

As mechanics go, it can work in logic very well. But it depends of a few factors. One is the hardiest to predict without getting your teeth right into the game. And that is whether the primal vampires are easy to fight or not. If they are easy to beat then having a few more roam around in a fallen district is no big deal. Making the punishment for killing the civilians meaningless. But that issue also comes with the potential problem of the enemy being to hard if the enemy is introduced too early into the plot which can put of players from playing the game. 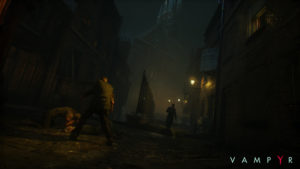 Another issue is enemy prevalence. If, in the mid game, primal vampires are everywhere and your fighting them often, even if they are hard to beat you would just stop caring if there was more of them about. So killing civilians carries no weight and ends up becoming a sole benefit. Saving the civilians stops becoming an issue. You’ll just make the primal vampires easer by killing the humans which just leads to issue one.

With this kind of system, the devil really is in the detail as going to far in either direction will lead to either the player getting bored with fighting or make the ‘human’ choice meaningless. Both can effect the ending. One means people won’t play to the end. The other means that the damnation of John means nothing. “Yes, John is an arsehole but why should I care? All the NPC’s were just dumb, fleshy meat sacks for every vampire.”

To know for sure whether these problems are there or not involves playing the game long term or in full. With it still around near a year until release, its hard to tell. The style of the game is good and it plays with a very “Bloodborne” style so I am hoping that it’s implemented well. If it is, it will be a very good vampire game when you have to face the choice of having to kill to live. That can make a good story.

“Set in early 20th century Britain during a bout of the lethal Spanish flu, the streets of London are crippled by disease, violence and fear. In a completely disorganized and ghostly city, those who are either fools, desperate, or unlucky enough to walk the streets lay prey to Britain’s most elusive predators: the Vampires.

Emerging from the chaos, a tormented figure awakes; as the player it is you who determines how to harness your new powers, by specializing in deadly, versatile RPG skill-trees that change the way you play. As a doctor recently turned into a Vampire, you try to understand your new affliction. Your quest of intuition, discoveries and struggles, will be filled with death and drama, while your attempt to stem the irrepressible thirst that constantly drives you to take human lives.

As you cling to what remains of your humanity, your decisions will ultimately shape the fate of your hero while searching for answers in the coughing, foggy aftermath of the Spanish Flu.”