Move or Die is a game that has exploded online with some thanks to YouTubers and Twitch streamers. Kind of an apt phrase as the premise of the game is ‘keep moving or you explode’. It’s harder then you think as you are pitted against the other players in a range of mini-games. They range from Mario-stomping the other players in a death-match to getting to the end of a timed platforming hazard course. The latest addition to the roster is a ‘Loot Mode’ where you run around the one screen map looting as much gold as you can with the winner being the one with the biggest pile at the end. I managed to get some time to talk with the creator and designer of Move or Die, Nicolae Berbece while at Gamescom.

Very much an indie developer, he was in the Indie Arena Booth section of the expo with a significantly sized booth. He’s been slowly expanding his booth year on year. Berbece is the lead designer, programmer, creator and maker of the game but small handful of others from around the world have helped him in small ways and he spoke very highly of them. (Alexey Volynskov, Joshua Wood, Maarten De Meye as named on the Move or Die website.) Even from talking to other indie developers at Gamescom, they all would be very thankful for the help others had given them showing that development is very much a collaborative effort, even if you go it alone and just get help in the form of advice form other developers and responses from players and the community.

The responses from the community is one thing that Berbece said helps drive development saying that the new loot mode was one of the ideas that steamed from the Steam forum pages. ‘I often go to the Steam pages and see what the players are saying. Seeing what ideas they have come up with or what they would want to be added into the game.‘ Although some ideas do take some polish. Some ideas fit easer in to the game then others while others have a tendency to break some modes of the now giant game list. One example would be the new VVVVVV mutator (blessed by its creator Terry Cavanagh) when playing the more vertical challenges. But Berbece considers it an advantage with the development of a game like this, not just being able to add new additions with ease but also being able to scrap ideas that don’t work easily as the cycle for developing new modes is shorter than most. 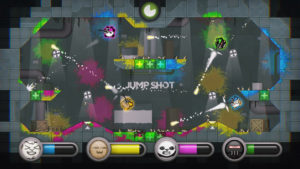 When he’s developing new modes, he said he aims for the ‘easy to play, hard to master’ style. It shows in what he said was his favourite mode was, ‘Jump Shot’, a game mode where players jump and do flips while trying to shoot their opponents. In his current development plans, Berbece aims to keep adding more content for now but is also planning to release “Move or Die” to consoles soon but is not setting himself to a set schedule. ‘I only want to do updates when there is enough. Only adding one map or one mode is not enough of an update.‘ When asked if there was going to be an update if/when the game was released to consoles, he only hinted towards there being plans but didn’t want to set anything in stone as there is still is some time to go. He also didn’t want to say anything on his plans for his next game, preferring to concentrate on “Move or Die” for now.

An interesting area of conversation came when we talked on what he would do differently if he were to do this again. He said his biggest change would be to not make the game in his own engine but use a pre-made engine like Unity. But he was also very critical of himself in other areas as well which led to talking about where he thinks other indie developers go wrong as well. One of the biggest mistakes he said was the use of flyers at conventions as they were too big compared to business cards and most people just threw them away soon as they could. He mentioned that he was planning to make a GDC talk on this topic and after talking to him I would be interested in what he has to say on the topic. He seemed like a developer that doesn’t shy away from his mistakes and is always ready to learn from other developers. But is also willing to be very critical of himself and others in aims to improve.

But on the popularity on YouTube side of things, he admitted he has no real idea what sparked it all off. After developing over a dozen games before “Move or Die”, he has no real idea on how it became the internet sensation it did. Although he is very thankful it did.

“Move or Die” is available on PC.