Bannerlord is very much a game that has two distinct modes. The first is a civilisation, empire game were you micro-manage your kingdom. You bargain with rival kingdoms using political manoeuvring and diplomacy. The AI controlled kingdoms have different personalities, like other empire games, that have different leanings towards war, peace and calculations. This means that you have to learn what your opponent will do and counter it. This culminates to your Influence, the value and control you can over over your enemies. You can use your Influence in your barganing that can muzzle of unleash the dogs of war on your and other kingdoms. 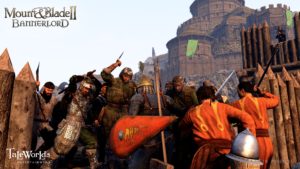 The other mode is a battle mode. When you are attacked of when one of your towns is under siege, or when you siege your enemy, you go into the position of the commander. The first chose to make is your unit positioning. You decide the formation of your units and were your large machines, like your built bolters and siege machines will go. Or you can let the computer decide for you if you just want to get onto the ground.

Then comes the attack phase. You go into a 3rd person mode of the commander and its your job to lead your units into battle and decide your final goal. You can fight away a siege in multiple battle so you can set a goal of destroying siege machines for one battle and then set the next for repealing the attack and cut down their numbers. You can fight teach battle differently. But don’t think your invincible. You can be cut down as easly as all the other units. You just go to the next soldier but your units take a hit from seeing their field leader cut down.

Or you can conduct some diplomacy with your enemy from the walls. You can negotiate peace or surrender without any blood being shead.

Bannerlord has a lot of potential in what your can do and how you can manage your kingdom. You can control through diplomacy or through war.

“TaleWorlds have implemented new interfaces to conduct diplomatic affairs, both personal and of the state. Conduct a parley from the ramparts of your castle and break a siege with words instead of weapons, or make use of your standing to turn the king against your fiercest rivals.

Behind epic siege battles and thrilling combat lies the game’s core as a simulated feudal world of politics, war and intrigue. Bannerlord puts you at the negotiating table and presents you with the freedom to strike game-changing deals with both friend and foe.

Use the Influence you accumulate within your faction to arrange peace, when a war no longer suits your interests and swing the deal by offering up your land, goods or gold. Bannerlord is set to advance the series meaningfully, in every aspect, offering players variety in the way they can approach the game and achieve their goals.”