Seeing Dual Universe at Gamescom has happened at a rather apt time. It’s a game based on exploring the universe and mining resources to build bases and bigger ships. Say “No Man Sky” and calling it a day would be one way but NMS and Dual Universe have one big difference between them, the implementation and use of technology.

The biggest difference between them in the core gameplay is that Dual Universe is an MMO. It is built from the ground up with player interaction in mind. It is also built with voxels so the world is extremely intractable so you can build on a large and a small scale, at the same time with the same building tools. You have a selection of pre-made objects like cockpits, called ‘elements’, that can be added cosmetically like wall decor but can also add intractability like a cockpit or a radar. 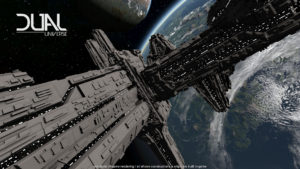 The shear scale you can build on is astounding. A prop ship they built for the demo was said to be about 7 kilometres in scale size. And it has a command room were you can fly the thing in at least some capacity. Then you can strap guns, radars, extra thrusters and a whole load more elements to it to add more capability to it. You can do the same thing on the planets surface. From a central base structure, you can dig down into the ground and build and make mines and then build a skyscraper on top. Both building a ship and buildings have ‘real physics’ interactions. Meaning that they have to have enough structural support to hold their weight (in the case of buildings) or have enough support integrity to hold together (in case of ships). Just from what I saw in their showcase, there is so much I could build and so much possibility of complexity.

On top of the building, you can maneuver easily from planet and space. There is no loading. You can get into your ship, point it towards another planet and just fly. No warp transitions. No load tunnels. Just fly from point A to point B with no loading. And as it’s an MMO, you and all if your friends could fly in formation if you wanted to and still just fly. If they can do what they say then you and your friends and maybe a few thousand other people can do just that at the same time. But that is just it. “If they can do what they say”. Or, put simply;

I had a long talk with one of their technical people and what is going on technically in the background would help make voxels the way to make games in the MMO space. It could bring a new boom of MMO intractability. Engine design, server technology and control, all coming being designed from the ground up to be at the peak of what it can do. This also means that game is no were near done. The build they have at the moment is pre-alpha, with a plan to have an alpha build next year and ‘possibly’ a public beta in 2018. It’s many years away from being finished. Long development times can work but it’s no guarantee of a games greatness.

The shear technical scale of the challenge Novaquark has placed in front of themselves is astounding. Already Dual Universe is a game I want to play. What they plan to do is take a step forward in advancing MMO technology as well make a game that can use that technology. And I for one hope they do.

You can find out more about Dual Universe on their website: www.dualthegame.com