Gameforge is a publisher we have a little history with, much to the confusion of Gameforge when I talked to them at their booth. You see, we (that being Chris then me) wrote quite a bit on Goblin Keeper. It was a browser game that was an a-like of Dungeon Keeper with a Facebook style leader board. It was a good game, especially when the terrible Dungeon Keeper Mobile came out, but it closed last year. They seemed quite surprised when I said we covered it as it was never one of their popular games. They publish Orcs Must Die Unchained, Aion and TERA so they must of been surprised to see someone who played and wrote on one of their lesser popular titles.

What I was there to play was their new game DropZone, an RTS-MOBA mix developed by Sparkypants Studios. It’s a style of game I’ve played before in what was Victory Command but now is called Battle Battalions. But DropZone has a very different set up that makes it a very different game.

At the games core, it’s a MOBA (a multiplayer online battle arena) much like DOTA and League of Legends. Can see some of Smite in the mix as well. You have a selection of pilots and their mechs to choose from, each with their own attacking range and special skills. Each is customisable with different AoE and passive boosts as well as cosmetic upgrades. In a bit of an RTS move, you choose three to be your squad instead of just one hero like in other MOBA’s. For the sake of the demo, we were all told to pick a heavy, support and ranged class. They all seemed well balanced with none of them seeming too over powered compared to the others. As the game is going to free-to-play, it eliminates most of the potential issues that could arise in a pay-to-win scenario.

The matches themselves is were most of the RTS DNA comes in. A big part of them match is based around unit control rather than the MOBA attack/defence cycles or territory control. The main way you win is by banking cores, pick-ups that get dropped when you destroy an AI hive. Any of your mechs can pick up the core and you bank it by dropping it off in the middle of the arena. As soon as the core is in the open, it’s free game until its dropped off. Meaning that just because you picked it up, it’s not a point to you until it’s banked so you can end up fighting over a core at the drop off. It makes for some very tense moments when the score is close but it also means that even if your behind you can still fight your way back. It also means that the MOBA respawn timer can be a big disadvantage so the RTS tactic of throwing units and attacks at the enemy doesn’t necessarily work. 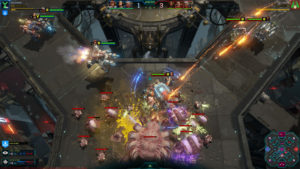 You can also score points by completing any of the three sub-objectives that are randomly selected at the start of the match. They can range from killing a set amount of hives to controlling all the viewing waypoints on the map at the same time. They usually only score a few points but its a way to get a smattering of points even if your on the defensive or waiting for a respawn.

DropZone is much more a MOBA then an RTS. The core mechanics are MOBA inspired but the additional RDS DNA makes it much easer to pick up and has less of a skill climb then a MOBA. It also means that you need to have more of the RTS multi-unit control mentality over the MOBA single hero blinkers. The other people at the press demo picked it up after a while but I guess with my history with games like it, I must of been more of a challenge. I managed to scrape a win, much to the interest of the developer doing the demo. Most of been one of few to do that by that point.

There is a 1v1 and a 2v2 mode which will make for some interesting battles. It also means that you can play by yourself in 1v1 as well as in co-op 2v2. I can see the competitive side of DropZone getting some traction in the esport realms, especially with the sport inspired 15 minute timer each match has. Would be interesting to see which, the doubles or singles, would be more popular or who would be in which league. 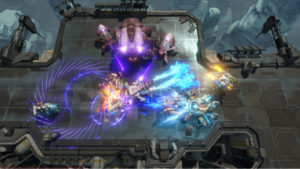 The design of the game is interesting and the game as it stands now is extremely good. The one thing Gameforge, and the games developer Sparkypants, need to do is keep the game balanced and make sure the free-to-play, unlock-through-play nature of the game remains intact through its updates. That would be the only thing that would damage the game but it would break its neck. As long as that remains whole, Dropzone has the potential to be one of the newest MOBA esports.