The guys behind Battlecrew Space Pirates have quite the reputation behind them. Part of the team were the people behind “Life is Strange” and others connected in the DONTNOD name are the ones making “Vampyr”. The main part of the dev team are DONTNOD ELEVEN, formerly known as HESAW, the studio behind “Blue Estate”. But even with the two studios, this one is quite different from their usual fare. 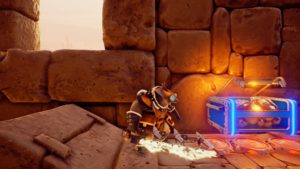 Battlecrew Space Pirates is a side on, arena multiplayer platformer. It’s a style of game has gained a fair amount of traction in recent years. My comparison point is Strike Force Heroes, a web game on Kongregate, but I’m sure everyone will have their own comparison point so it’s a game everyone can pick up and play without much difficulty.

At the moment, you have the choice of two defensive and two offensive characters, a melee and ranged character for each type. It gives you some ability to chose a complementing character to how you want to play. Each character has a primary and secondary attack as well as a movement ability. They pretty much fit with each of the characters style and design. On top of that, each character has has their own ultimate ability. One has a 360 death blast, another can spam grenades, another can make a slow-mo aura and the last has a one-hit-kill berserk mode. They work well together as a team but a few can be more lone wolves then others. Surprisingly, it’s the two defensive characters. 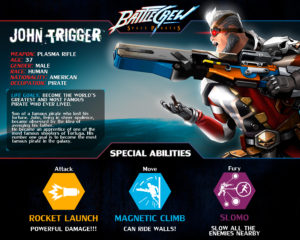 The two offensive characters are fairly ‘tank-ish’ in their primary and secondary attacks but their ultimates are more team based and more support then the other two which are more offensive in nature. In the demo, I played as the slow-mo guy (offensive/ranged) but his skills felt more defensive. The range of the slow-mo aura felt small as to get someone in it they had to be in close range which would leave me in the open when alone. Even with the tank nature of the character, I wouldn’t last long. By comparison, other ultimates are more active attacks. It just means that I ended up playing him as defensive even though he was built as an offensive character. From the way the characters were explained, it seemed like the melee characters were the offensive ones through their more active standard moves, and the ranged ones seemed more defensive through their more passive standard moves. The ultimates seemed more based on the characters themselves instead of it being offensive or defensive which threw out the design behind there being defensive and offensive characters.

Otherwise the game is extremely polished. The levels are well designed. Each of the two we played had distinctive designs and they allowed for a lot of movement so you didn’t get bogged down in the melee or stuck in a corner when being sieged. The addition of the traps in the second level we played added some complexity to the fighting. A few moves I noticed the dev’s doing, like hanging around the traps and jumping into the ones near our vault, I can’t tell if they deliberately threw the matches or not. As it was a close win to the press players both times I’m not sure if I should be glad not if they did.

One thing they mentioned a lot was the community unlocks and challenges. When the game is released, the community will get to decide what additional content gets unlocked next. That being new characters, levels, etc. The only deciding point on how well this will go is how active the community is post release. I’ve seen some games do this and do well but also others that did the same and not so it comes down to implementation. From what they said it all seemed ok, as long as they can do what they say and what they want to do quick enough and keep the variety going.

All in all, it all seemed very good. The design is good and the characters are well balanced except for the ultimates that are more misaligned to the characters type then bad or not useful. Maybe that can be solved with some screw tightening or just moving who has what ultimate.

Battlecrew Space Pirates it set for 2017 release on PC.