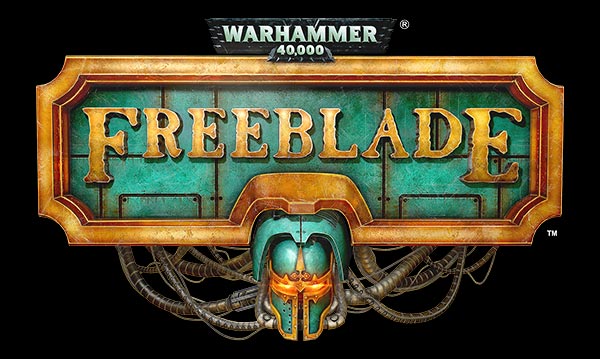 As some of you may know, Facebook recently released their standalone game client, Gameroom. With it comes all the games you’ve previously played on Facebook, and more. With a more powerful game client, installed directly on your computer, with access to storage on your computer and a few other perks, that the web-based platform just couldn’t take advantage of, comes a bunch of more advanced games. One of these games is Warhammer 40K: Freeblade.

As a big fan of the grimdark tabletop figure game that is Warhammer 40K, I jumped on the opportunity to play a game in that setting on my computer. You see, my computer is… lacking… in many areas. Right before I moved to England, my desktop decided to give up and I had to abandon it, bringing only my laptop. Shortly after the move, the laptop decided to break. Lacking the funds to get a new one, I’ve just kept repairing the old one, picking up parts wherever I can find them, to the machine I’m typing on now. I call it the FrankenPuter, or the CrapTop if it gives me too many issues.

As such, I cannot play the fancier games, which is why you haven’t seen me review any of those in the past few years. Others on this site has far better capabilities to deal with those games than me, so I haven’t really prioritized it either. But Gameroom allows me to play really good-looking games, so I have that going for me, which is nice.

As the name suggests, WH40K: Freeblade puts you in control of a Freeblade using a Imperial Knight class warmachine, a robot-looking walker armed from top to bottom with the latest tech the Empire has to offer. Freeblades are versatile and can change almost any part out, so you can customize your weapons and armour as the mission requires. It has one big drawback though: its human operator must be permanently attached to the central core, in what is described as The Ritual. You are literally giving your life to the Empire, the highest honour any Imperial Guard can receive.

The game starts right after your awakening after The Ritual, dazed and confused, in the middle of a battlefield. As your character regains consciousness, a voice guides you through the process of controlling the Freeblade. This is a very novel idea and works incredibly well, as it gives you a tutorial without taking you out of the games immersion.

You control your machine mainly with the mouse, using its movement to aim and a combination of left and right button to fire. You can zoom with the spacebar, but I have yet to find a use for this feature. The movement of the Freeblade is controlled by the game, so you don’t have to worry about that. Despite this, it doesn’t feel like your run-of-the-mill shooter-on-rails.

The Campaign Mode is sortof handholding, with you taking hardly any damage at all and can take your time. For the first two campaigns, you even get extended reaction time on the quick-time event for the melee fights. But Multiplayer shows no mercy at all.

First off, it’s not really multiplayer, it’s that Facebook-style of multiplayer, where you’re fighting against a computer-controlled version of your opponent’s best loadout. It gives a diverse range of opponents, as each player has their own style of weaponry, armour and color scheme. It doesn’t feel like you’re fighting the same computer enemy over and over, which is nice.

But you get no handholding at all. You’re thrown in the mix, with a vague tip here and there telling you to shoot the regular enemies to get “fury” and the person with the most fury gets the first strike in melee, and shooting the opponent decreases their fury. That’s it, no more tips, no more instructions. I sat for a solid hour-and-a-half trying to figure out why my opponent often had close to full fury and I rarely had any. I tried focusing on shooting the opponent, but that barely touched his fury. I tried ignoring the opponent, but then my fury dropped like the Titanic. I tried focusing on the big guys, on the little guys, conserving ammo, wasting ammo and nothing worked. I lost every single game.

Then I realized you could upgrade your weapons and armour in the Forge, for the cost of the “soft currency”, Ore. Soft currency is the currency you get in this type of game without spending money, and you generally get a generous amount of it. The other type, the one you can spend money to get, is referred to as a “hard currency”. In this game, the hard currency is Gold.

I also saw that you could unlock some of the fancier colours and stickers with Gold, but what shocked me when looking through it was that stickers you buy for gold actually gives you bonus to your stats. This feels a bit pay-to-win for me, even though the bonuses are fairly small. But a 20% bonus to XP means you can boost your way through the levels quickly, unlocking more ore and better gear. Those likely to spend real money on doing this will most probably also spend it to unlock “blessings”, which gives you even more boosts. Blessings have no effect in Multiplayer, but the fact that you can boost your character through Campaign with it means you’ll get a lot better gear for it as well, and those do count in Multiplayer.

There are more ways to get the edge in battle, both multiplayer and single player, using Gold. Gold allows you to bypass any and all timers, for example. You can also buy “supply drops”, which contains up to 5 items each. Depending on how much you spend, you can force at least one of these items to be of any of the 4 rarity ratings, meaning better stats and higher gear value (we’ll come back to that later).

Anyway, I also noticed some of my gear was missing. For example, I tried in every game to fire my shoulder-mounted rockets, to no effect. Due to the chaos (no pun intended) on the battlefield, I couldn’t determine if it was just useless, or simply missing. Turns out it’s the latter. The game let you have it in the tutorial, but you had to actually finish Campaign 2 to unlock it again. This was never mentioned and unless you had a reason to change your shoulder-mounted weapon in the loadout screen, you wouldn’t even notice it. Multiplayer was unlocked after finishing Campaign 1.

I went back and finished up Campaign 2 and could finally get everything I needed for my Freeblade, went back and actually won a few Multiplayer games this time, mostly because I had one more weapon than my matched opponents. Then I ranked up, and my opponents were at the stage where they too had these weapons, and I was right back at losing again. Right now, after 3 hours of gameplay, I’m still not sure how to properly play the Multiplayer, which is a shame because I really enjoy playing it.

Another thing that slightly annoys me is the durability of your Freeblade. Yup, it has durability. As you play, you take damage. This damage eats away at your hull, and if your hull goes down your Freeblade will get negative effects applied, such as decreased toughness and damage. You can either wait, about 20 minutes per 10% of hull damage, or you can pay Gold to repair instantly.

I’m guessing this mechanic is a replacement for the “5 lives”-mechanic most other games of this type has, and I very much prefer the one Freeblade uses, as it doesn’t force you to abandon the game for several hours just to regain the ability to play it. So that’s a silver lining, I guess.

One more thing bugs me, and that is that free players will find it hard to keep up with gear fairly quickly. As mentioned earlier, there’s a gear rating in place, and to play the single player missions, you’ll need a certain gear rating. Not only an overall one, but a specific one for each of your 10 slots. You need Ore to create new weapons or upgrade them at the Forge (as well as some waiting, which you can bypass with Gold). To get Ore, you can either earn new medals in the Single Player missions (any mode), or deconstruct gear you already gathered (also mainly gained through these missions, but you can buy some for Multiplayer medals as well). But to play missions, you’ll need the proper gear rating. To get the proper gear rating, you must spend Ore. You often end up spending something like 1200 Ore on gear for a new mission, where you’ll get up to 3000 Ore (including the deconstruction of the gear you find). Almost half of it is spent on just being able to play the mission.

A plus side to this is that you have a chance to find some good Rare gear along the way, sometimes better than you had before, which allows you to bypass some of the Ore grind.

A thing I really like is that you can switch sides at later stages of the game, if you get good enough at Mutliplayer, as you can collect Chaos Tokens to build up a Chaos version of the Freeblade. I have not yet figured out if this is the only way to switch side, or if Chaos is the only differing path, or even if it unlocks new Singleplayer stuff, but I really like the idea.

All in all, I really enjoy the game, and it’s not just because I’m a huge WH40K fan. The positives far outweigh the negatives. It’s a really enjoyable game with a very low threshold to entrance for new players. You don’t need to be a fan to get into the game, and fans get a lot of eye-candy and fangasm moments.

Now, if you forgive me, I have more enemies to slay in the name of the Emperor and the Golden Throne!