Some time ago, there was a weekend were the game “EVOLVE” was available to play by a lot of people. I was very careful choosing those words because it wasn’t free to play. You had to get a code to be let in to play it so technically it was an ‘closed-open alpha preview’. Closed because you had to get a code to get in but open because everyone ‘could’ get one. I ended up getting a bunch of codes because the “EVOLE” guys at MCM where handing out handfuls of them (so I got 4) and then Curse did a thing were if you signed up to their voice chat Teamspeak style thing you would automatically in. So like any interneter, I signed up, got codes and then deleted it. All that ended up being pointless because as 2K are the publishers of the game, they opened up the alpha to everyone who had “XCOM: Enemy Unknown” in their Steam library, which I do. So I got in not because of MCM or because of my dubious ways. I got in because I like ‘XCOM’. 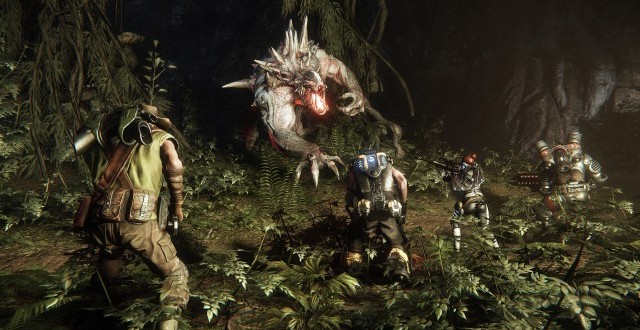 It was my first time playing “EVOLVE”. I’m not in the ‘inner circle’ of the internet and YouTube so it was never passed on or down to me. And I never got press passes for conventions before so I had never played it at events. Although, it was at MCM in October but I didn’t play it because it was for the multiplayer. Having others depend on my ass being good at a game having never played it before but qued for most of an hour to play, I decided to not run the risk of gaining ire. Especially because as I was wearing a press pass and calling myself a ‘games writer’. As soon as games become a sudo-job the expectation of my ability sky rockets. In the minds of others anyway.

You may have noticed that I’ve hit the 1/3 page mark and said nothing about the demo. That is because there is not much to say. The alpha had 3 levels (at least that was amount of different levels I played), 2 characters for each class (1 default, 1 XP unlockable) Each character had one class ability and three weapons. Usually one long range, one close-medium range and one throw-able/placeable item. The class ability always was the same for each character in each class. For example, both the heavy characters had a personal shield but different weapon set. New characters have been since mentioned but it was 2 characters per class in the alpha. There was also 2 monsters you could play as but as because of the aforementioned ‘depends of being good at playing, I decided to avoid being them and didn’t play as them at all. This leads me to my first criticism. There should be a single player or practice/training mode. Being good online, and making sure that you don’t receive the ire of the internet because the internet is cruel like that, depends on knowing what you are doing. The preview was a trial by fire and lead to many people being killed as the monster just because it was their first time. On the other end, it lead to many teams being slaughtered because someone was new to a class. This is why I think the Heavy was the most desired class, even above the monster. It’s the class that is exactly what it sounds like so it’s easy for new players. You are a heavy man with a heavy gun shooting heavy bullets. Easy peasy. They said their will be a single player mode but that is the sum total of information there is about it. It would be good to hear more about it because, for online games, the single player campaign is the games training mode.

The only other problem was the loading times. Considering that the alpha of the game was already 13GB and because of the settings only the the best of computers could play it, waiting near to 10 minutes for a level to load is appalling. I dread to think what the size of the full game is going to be if the alpha is already 13GB. Their are still more characters, more monsters and more levels to be announced. If it is going to be heading to maxing out a 50GB blu-ray disk as that is the disk of choice for the current console crop, downloading via Steam, PSN and XBL for the vast majority of people is going to take a long while just because of the standard limited broadband service they are given.

The long load times can be fixed and should be. If the load times are so bad that I go to make a cup of tea between levels, there is a big problem. They can be fixed with optimisation and polishing the code. As it was an alpha there is some leniency to be had. As long as it is fixed in the final release.

Here is a section for only the PC players (as I would play it on PC as I have no current interest in getting a new console yet,) so if you are or are going to be a console player, you can skip this paragraph. Also, if you are for some miracle Turtle Rock reading this after googleing yourself, please read on. The PC port needs some more controllable settings. The PC that I played on is no slouch. It was top of the range when we built it nary a year or ago, and I still had to drop my settings to get thing the game to a playable graphic state. I’m not talking about being 1080p or 60fps, frankly I don’t give a damn. I mean to a point where there little delay moving about or shooting. I can understand not being able to play modern games on this PC, this being my writing one. But having to drop the settings a quite significant amount on a PC that was built barely a year ago is not a good sign.

“EVOLVE” is fun. Very fun. Most would think it’s weird me saying that because of my aversion to online and multiplayer games. But it hits all the right notes in the right way. It looks great, plays well, and the gameplay is smooth and weighty where it needs to be. This was only the alpha so it can only get better. This, as an alpha, was better then some of the other demo’s that I played at MCM (I’m looking at you “Assassin’s Creed Unity”, 3 weeks before release.)

But as a last note. This game was meant to come out on October 21st but was delayed to February next year. The game, as I played it, felt no were finished. It was an alpha after all. That feeling is understandable. But its original release was the same week as the ‘Big Alpha’! Did they honestly think that it would be finished in time? If they did, why did it feel so unfinished? If they didn’t, why set such an early release? Or was it just a scheme by someone just to keep the game in the public eye or is that too cynical? Either way, the new window is a good window. “DmC: Devil May Cry” (a personal favourite) and “Bioshock Infinite” (both “Must Play Games of the Year”) were released in the same window so it’s good as any.