The internet, and especially social media, is a thriving ground for internet characters and cosplayers. EeVee Cosplay, real name Emily Valentine, is one of those, reaching almost 500 followers on Instagram and a dizzying 15,000 liking follower on Facebook. It’s safe to say that she has found her place on the internet. And we got to ask her a few questions.

When asked about what got her started in cosplaying she said “I went to my first convention back in 2013, Manchester MCM [Comic Con]. I saw other people doing it and just decided from there that I wanted to do it as well.”

“My first cosplay was Rena Ryuugu from Higurashi which I then wore to MCM London 2014, but my first idea of a cosplay was the classic Pikachu onesie, a little embarrassing now I think about it.” 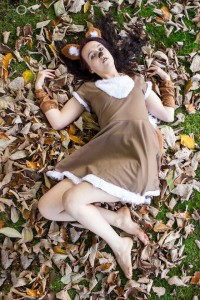 Even from those early days, there was going to be a Pokemon connection to her cosplays. EeVee has become known for her aptly named “eeveelution” Eevee costumes. Part of the connection steams from her initials. “It’s actually my real name/initials, Emily Valentine, so E V, hence the capitalization in EeVee, but it also comes from my love of Pokemon.”

I also means that her favourite costume is Pokemon related. “Vaporeon, I love the different shades of blue I ended up using and just the design in general.”

The process for making cosplay costumes can vary from person to person. Some buy pre-made while others make the whole suit and sometimes props from scratch. EeVee is one that fits in the middle. Buying some parts pre-made but adding her own twist to them

“Some cosplays I buy due to lack of knowledge about how to make them and because I work so much so it’s a massive time saver.

“But usually my eeveelution builds do take several months to even come up with a design for them, I spend a lot of time researching cosplays, ideas of materials but usually once inspiration strikes I just sit and make for a few days to complete a cosplay.” 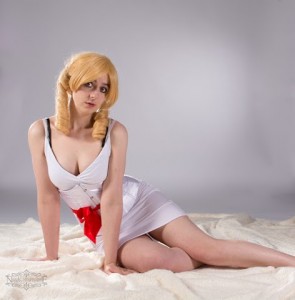 EeVee has built up a large fan base on social media, namely Facebook with a whooping 15,000 followers. Part of her popularity steams from her many photo-shoots, which has lead to many available prints. When asked about working with photographers she said; “Be brave and just approach photographers and ask nicely if they wouldn’t mind shooting with you.” With her advice for other cosplayers wanting to work with photographers being; “…don’t expect photographers to come to you, always credit no matter what and photographers are con goers and people too, just like you are. So treat them like people and make friends, not like a service.” 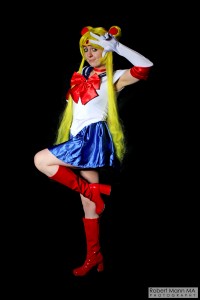 But with such a presence on social media comes risk. Cosplayers like EeVee present their costumes, and so themselves wearing them, on a more cosmetic platform then most other people online. This can lead to having some leaving comments and messages that can vary from the overly negative to harassment. The vocal negativity can be very loud as well as cruel at times, as seen in many recent news stories. Even EeVee herself doesn’t see were some for it comes from.

“I don’t understand the need to be mean or nasty to people online. It’s never struck me as something to do, so I don’t have an answer for that one.” As advice for other cosplayers attempting an onlince public presence;

“If someone intends to cosplay and run an active page or even intends to compete with cosplay learn to be thick skinned or gain a persona. It’s how I’ve learnt to manage the past few years. When people make nasty comments their attacking Eevee, not Emily so it isn’t actually personal or worth getting down about as they don’t know me as a person, they just know a page on the internet so it will never be personal.”

“At the end of the day its your happy times and memories that matter not what is online, if one day the internet ceased to exist all those likes and comments are meaningless in the end. So the fun you have and the friends you make are most important parts of cosplaying.”

You can find EeVee on her Facebook page and her Instagram. You can also buy her prints on her StoreEnvy page.