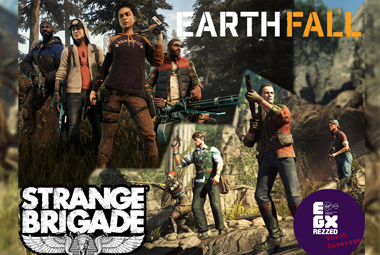 “Earthfall”
Developed by Holospark for PC,
Self Published,
Available via Steam Early Access

These two games are very similar but are at two different ends of the tonal spectrum. Both of them are four player co-op games but are inspired by different sources. 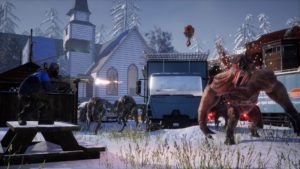 Earthfall is ‘Left 4 Dead’-esque having four different player avatars with no differences but cosmetic and the usual enemy types with a grabber, an exploder, a heavy, and a buffer. Even the weapon mechanics are pretty much the same, with the core set being shotguns and assault rifles. It’s actually quite hard to not compare a very significant chunk of the game to ‘L4D’. But that wasn’t lost of the developer I talked to who was very open of the influence.

The game follows a four person team who is tasked to complete an objective that assists the human rebellion against the aliens, either kill/destroy alien stuff of protect/rebuild human stuff. It’s a straight line progression with liner maps which are singular levels in a single map style. For example, the map I played for the demo was a mountain level with the task being to destroy an alien hive nest. Lots of camping spots and small industry building outcrops. The spread of the aliens is much the same with a few scattered from location to location with bugger hordes being places at key points.

But another way they keep the tension up is with random hordes appearing at timed intervals. As the developer put it, it was to make the player/s decide wither it was worth staying at a larger location to look to supplies and collectables rather then move forward as they’d have to face the horde sooner or later anyway. The main thing that players would look for is heavy weapons like flamethrowers and mini-guns as they decimate the horde, but with the number of hordes you have to fight they can be limited. So the question becomes is it worth looking for another possible heavy weapon and maybe using up the one we have or just using the one we have to move forward.

Things like this will end up having the long term effect of as soon as you know where everything is then the maps becomes rather easy. But by that point your most likely going to have a team you regularly play with meaning the fun more comes from the team. The team dynamics works well with the standard team heal kits and pick-ups which are rather generous so you can being teammates back into the fray quickly.

Overall, there isn’t much else to say but if you like ‘Left 4 Dead’ you love this game to. 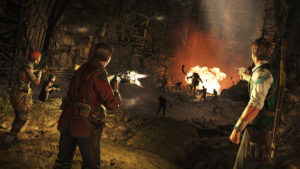 Strange Brigade on the other hand is more inspired by the ‘Nazi Zombie Army’ series of games. So it won’t surprise you that it’s developed and published by the same company, Rebellion Software.

The game is presented as an old style adventure serial, complete with black and white cutscenes and a narrator who proclaims every word he speaks. The style and the gameplay fits together nicely with the four players each having their own load outs that lead to different attack strategies. Theirs the rifleman for range, the grease gunner for rapid fire, the Browning gunner less so rapid but bigger fire, and the shotgunner who I liked to play as he goes round with the Preacher (there’s me throwing in another ‘NZA’ reference).

The gameplay itself is progression through hordes, with hold outs with bugger hordes, leading to the final boss confrontation at the end. But to start drawing a line in throwing around more ‘NZA’ comparisons, the enemies are still undead but they’re more classical as the game is set in Egypt so they are undead are ummies. Being something based on the adventure serial style there is the Boris Karloff 1932 ‘Mummy’ homage in an enemy that controls the regular fodder zombies mummies but, and this is where I might be over analysing, I feel like there were 2001 ‘Mummy’ homages. For example enemies like the army units (that appeared in the end of the demo which was the same one they used for Gamescom) they climb about and move in the same manner as the movie so could be another reference there.

There’s probability other references I didn’t notice or recognise but it actually combines with the presentation to make something interesting. The gameplay itself and the engine the games built on is pretty similar to ‘NZA’, as ‘Earthfall’ is very much made after ‘L4D’. But in Strange Brigade’s design they made something different. The game is a love letter to to the old ‘sword and sandals’ adventure serials and movies, being steeped in that style of visual presentation. It’s not just “blank but this time with blank”. It is ‘Nazi Zombie Army’ but with mummies, but it’s also has magic, active traps, upgrades, and more team based puzzles.

They’re both good games, I’d say keep an eye on both, and I’d love to play both of them more with a team. But while one feels like it’s made to a pattern, the other feels like a company sticking to their wheelhouse but doing something more.

And as this goes goes live, “Strange Brigade” just announced their release date as August 28th. Another one to add to the ‘Autumn game rush’.