Reviewing a game like this is a little hard. It’s one of those types of games that is more defined by what the player does in it than it’s complexity or story. It has a base set of mechanics but the player, from beginning to end, is left to their own devices meaning that a lot of the experiences in the game are player made.

The games developer Sundae Month calls Diaries an “anti-game” and in a way I agree. You are an ‘Alaensee’ (the more I see it, the more it seems like a reference to Futurama’s ‘alienese’) girl-beast who is a janitor at a spaceport and it’s surrounding area and markets. At the start, your decide to go into the underground sewers/catacombs were adventures used to roam finding treasure. But while your there, you stumble into a room for the 9 goddess’ and you become cursed. You know your cursed because a disembodied floating skull floats around you going ‘bluhh’ every now and then. Your quest from that point is to get rid of the skull and the curse.

This is were the two core mechanics come in, routine and luck. Routine is the biggest core mechanic with the game built around it. As a janitor, it’s your job to incinerate trash off the floor. But after a while (or just when it gets dark) your personal incinerator loses power and you have to recharge it by sleeping. But to sleep, you have to eat. There is a hidden hunger meter so you can go from being a little hungry to starving so you have to eat more so you can sleep. You can’t got to bed hungry. The more trash you incinerate, the more you are paid the morning after. Or you can keep the more valuable items like alien tech or armour and sell it to the street vendors. Soon you end up in a routine of wake up, get paid, go about town doing your quest jobs and burning trash, eat, sleep and starting over the next day. The trash you pick up is random enough to give it a simulator sense of fun. Much like ‘Viscera Cleanup Detail’ but more concentrated on the routine then meticulousness. This certainly makes it an acquired taste. Some people will just find it monotonous while others will be engrossed. 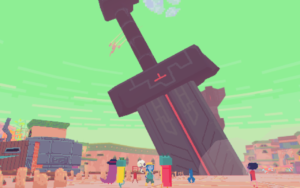 The Luck mechanic only felt tangentially connected to the game proper. It didn’t seem to have much of an effect on the game at large. I managed to break 1000 luck and it barely played any differently to when I had -200 luck. On that, when I was testing what having negative luck would be like, I found it extremely hard to lose luck. Or at least to stay in the negative numbers. There really seemed to be a push to normalise to 0 so it felt more fluid. You have to work to keep your luck. And it’s far easer to keep high luck then go negative. Anyway, the only discernible effect I could see the luck having was the lotto machines (machines placed around the map where you get one random item an in-game day) but most of the time I didn’t use them. The odds of getting something valuable to sell was far between to bother. All I seemed to get was ‘fetishes’ (mini idols of the goddess’) most of the time which was helpful for the first quest but was useless from that point on.

After that, your on you own. There are much more complex interactions between you luck and your routine but the game is extremely vague. For example, if you burned items associated with the goddess you luck will decrease. At least I think so. And if you burn organic matter, so plants and animals (dead or alive) you lose luck too. Again, I think so. Talking to passers-by gives you hints but the game is so vague it’s really obtuse. Or just impossible. There is something to do the ‘blue gems’ and the beige ‘containers’ (I know because there is secret achievements with no description) but for the life of me I could not work out what the hell to do with them. Carry loads, give loads, I really tried to work out the mystery but it beat me. It’s a big contrast to the main quest line were a green compass arrow appears around you when you get close to a plot person and points you to them. Just wonder the city and you’ll find them eventually.

That is part of the reason why I like this game. Call me a sadist, but those moments where the game just says something and stares at me while I try and work it out what the hell it meant are brilliant in its simplicity. All of the tools to solve every problem in the game are given to you at the start, minus the money to fulfil them so the only barrier to the solutions are time and your own intelligence. 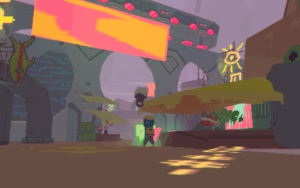 The games visual design and look can be an advantage but it can also be a disadvantage. For every good thing the visuals had it was counted by a negative. The pixilated, brightly coloured palette of the design gives the game a very distinct look that stands out. But the normal (background/wall filler) buildings and floor are just beige with space decals which is bland. The world cycles together like a small planet (most obvious at the end when I saw five plot spaceships during the fade to white credits) which gives a feeling a continuous and vast setting. But it also means you can get turned around easily and lost, compounded by the beige buildings and walkways. The design of the characters and other NPC’s is good and filled with (what I would guess) as references, like a sparkling Dracula-alike (Twilight) and a pink-ish woman in a pink dress and pink hair (Princess Bubblegum from Adventure Time) but over time the pool dries up and they just end up repeating and falling into the background.

Another negative is that, as your a trash picker, you spend a lot of time staring at the floor. But there was one moment, at the top of the pyramid you have to go to for a quest, I angled the camera up to the sky box looking and the town from above and it was stunning. The sky box is active with planets and moons orbiting and ships flying about and the neon lights at night make the town glow under the shattered moon. The game world is active and living when you take the moments to look around. And that’s kind of the point.

The game routine gets you staring at the ground and into your own characters personal bubble blurring the world around you as you try and fulfil your quest. And the ending (that I don’t want to spoil) has you breaking the routine. But going back to the routine after to the credits in the same way as a Ubisoft sandbox does null that a bit but even I have other things to do and try and work out so maybe more time wondering about would be good. 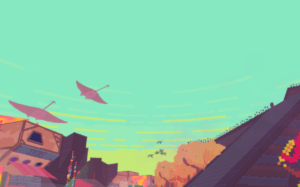 In the end, I do recommend Diaries of a Spaceport Janitor but it is an acquired taste. Some like me will pulling into the world but others will just brush it off as another ‘arty game’. If by what I’ve said has you interested, then may I suggest buying it. If it hasn’t then it might not be the game for you.