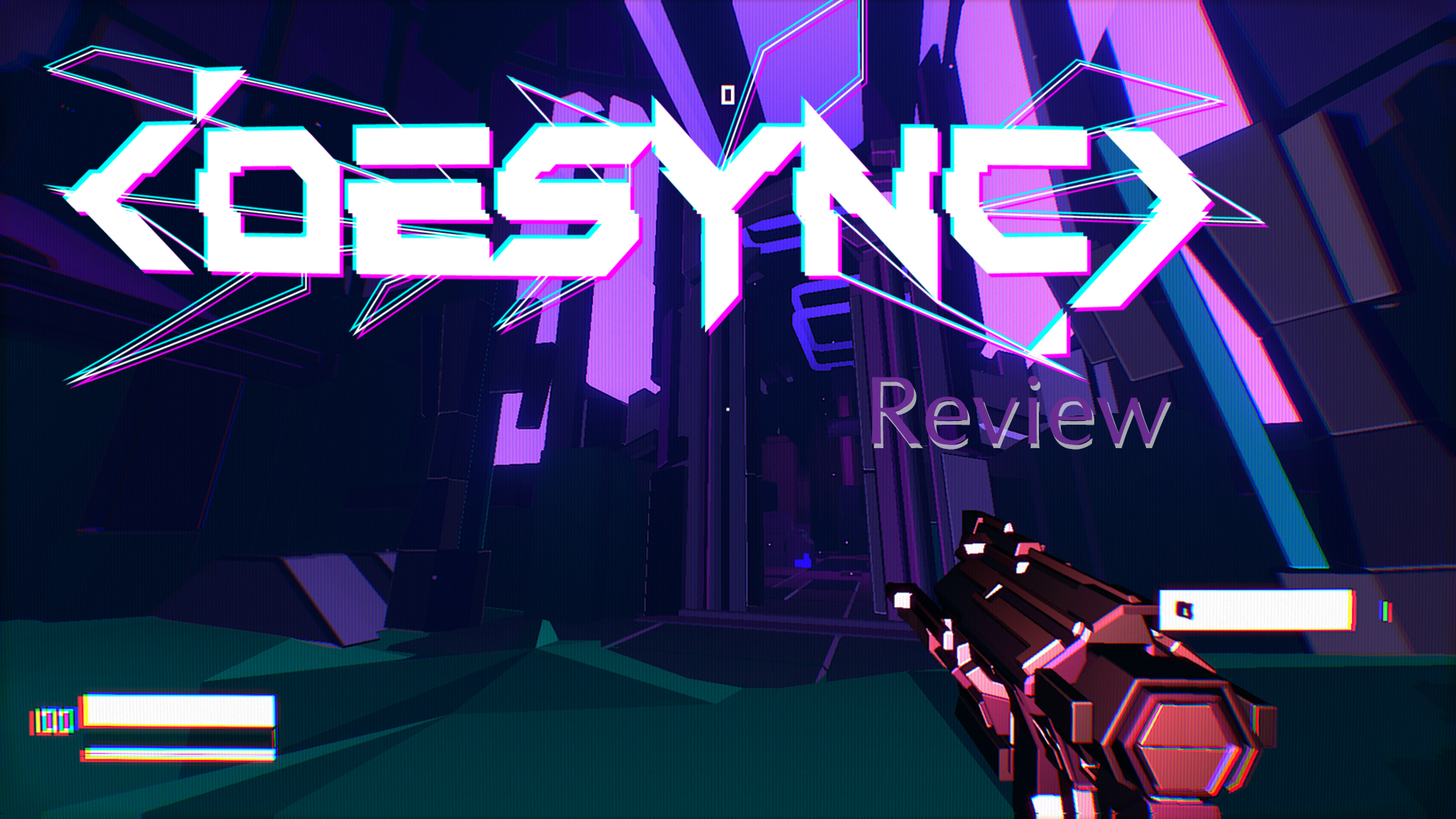 When ‘Desync’ gets going, it gets intense. Not in a drug trip or madness overload kind of way. More in a shoot in all directions kind of way. To make a forced analogy, it’s like being Keanu Reeves in a John Wick movie if he was still acting as Neo.

You go in with no explanation. That ends up being a bit of a bad point as well but I’ll get to that. The lack of explanation means that the story is bit opaque, even though it’s a very thin part of the game from the start. You are (from what I can guess) a digital entity or hacker allegory in a digital realm fighting either a virus or an AI counter program. And the way you fight is with guns. Not that many guns but you get the usual collection of pistol, shotgun, machine gun, as well as a few novel ones that vary from relatively useful to generally useless.

A way to describe the shooting mechanics is saying it plays like a bullet-hell shooter but in first person. It’s like the fasted-paced, strafing retro shooting style that games like “DOOM” and the new “Quake Champions” want to to capitalise on but all the shooting is in waves of enemies in a liner arrangement of sealed off arenas. So a first-person bullet-hell shooter is the best descriptive I can come up for it.

The core structure is built on DPS, so rate of fire and damage per shot. The guns themselves go on 4 stats, attack power, clip size, rate of fire and movement speed de/buff. You can upgrade them as you go, like boosting attack while deceasing speed, but most of the time I barely felt any effect. They way they shoot ended up being the man reason behind the guns I chose. The Pistol is mandatory (as it has an ammo auto-recharge so you never truly run out of ammo) and I always went with the first 3 guns you pick up. A shotgun for stagger, rocket for damage and the machine gun for bullet output/strafing. They have have secondary fires as well but some are so situational I pretty much never used them and after a while never considered them.

As with the story, none of the gameplay mechanics are outright explained. Some can be easily worked out or insinuated, like guns + enemies = death. Others like the the ‘Desync’ power-up mechanic are not. I worked out a few of them out while editing the companion video for the review but that was because I had the time to look around the screen and work things out while in edit. In regular play, everything is so fast paced you don’t have the time to work anything out. There is a messaging system in the game that acts like a help log when powers are unlocked but the messages usually just end up being cryptic or end up stacking light explanations on light explanations still leaving you no proper explanation. 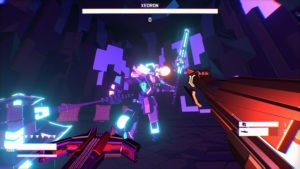 The light explaining ends up being a trade off. The soft storytelling means you can essentially make up you own story around events. But the light explanation of the more in-depth mechanics means that a lot of the game ends up falling by the wayside in regular play. A tutorial would end up getting up in the way so the lack of explanations is something that the game just has to contend with.

But even so, ‘Desync’ still ends up being really fun. The speed and ease of the basic core of the game makes it re-playable and easy to pick up, even if the complex parts go unused. You get into the chaotic rhythm of strafing and shooting. When you most likely die, the enemies waves spawn in the same pattern making the levels learn-able. This is where the next part of the game comes in.

The game is built with leader board competition in mind. Everything you do in each level nets you points. Accuracy, speed, damage output, not taking damage, everything. At the end of each level, everything is tallied up and you final score is set. And then that score is posted on the leader board against your Steam friends and everyone else who’s posted a score. The first time you do a level your not going to be very high on the board. Part of the games design is going back to past levels after your unlocked upgrades and buffs to post better scores. Most of the upgrades are small incremental boosts which don’t really seem to do much on their own. But they much do something as going back to past levels was easer, more then just knowing what was going to spawn.

The best way to summarise the game, and conclude this review, is by saying that ‘Desync’ is a game that designed very particularly which leads to some well considered compromises. The game is built on speed. The speed of the gameplay itself as well as getting in and out of levels. But that means that little is outright explained. But, part of the game is finding the unique ways to kill enemies that provide boosts so explaining it outright would take away from part of the challenge. So a way to keep the challenge up is through the speed of the gameplay and levels. It’s that circular type of design were each negative is balanced by an added positive until it becomes balanced as a single entity. The opposite of the ‘hanging a lantern’ method which other games end up doing.

So in the end ‘Desync’ is really fun. Whether it’ll have a lasting impression on you mostly depends on how much you like posting and improving your score on a leader board. For me, I’ll be posting new scores for a while. But, considering the number of levels, whether I’ll still be posting in 3-4 months is anyone’s guess. Unless there some level DLC. Then I would eat that up.