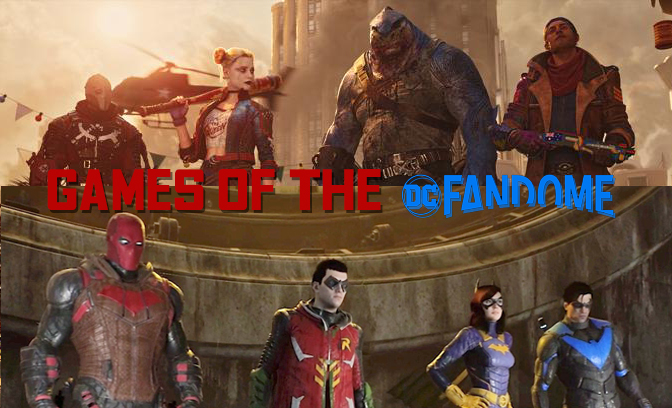 The legacy of the Batman Arkham series is really hard coded in the Warner Brothers video game division. It was a fantastic series and ended (might as well say ‘spoilers’ even though its a game that’s over 5 years old) on an ambiguous note on whether Bruce was truly dead or not, whether he died in the ending manor explosion or became a Batman who used the Scarecrow’s Fear Toxin to be more scary in a darker, more scary world post Arkham Knight. Going by the two games that were announced by DC at the FanDome, he’s dead for now. And only one of the games is a direct sequel to Arkham Knight and it’s not the Bat-Family related one.

“Gotham Knights” might as well take off after ‘Arkham’ even though it’s the one by WB Games Montréal and isn’t the Rocksteady one. Batman starts the game dead, somehow. For now there’s no explanation to why but the Bat has died quite a few times in the comics so eenie meenie miney mo for your death choice but I guess they’ll show or explain it in the game proper.  On his death he sends out a pre-recorded message to the rest of the family saying that soon the Gotham underworld will find out and the family must take his place. It’s not the whole bat family mind. Only the big four; Barbara Gordon as Batgirl, Dick Grayson as Nightwing, Jason Todd as The Red Hood, and Tim Drake as Robin. You might have seen an anachronism with Barbara going round as Batgirl and you’d be partly right. This is the timeline where Jim Gordon is dead and she was the Oracle but recovered. It happened in the comics. I think ‘it happened in the comics’ can be a phrase that goes with the game. Because it’s not a sequel to Arkham, they want to take it in a potential franchise angle so they can pick and choose bits from the previous canon to make their own.

They had a gameplay demo made so have an indication to where the gameplay style will be heading.

With there being four characters I would assume they fit into the main combat archetypes; quick and mobile but lower defence for Batgirl as she’s always pictured with the grappling hook, more average mobility and higher attack with over defence for Robin, highest attack and lowest defence for Nightwing because he’s older than Robin, with Red Hood filling the ranged attack slot because guns. Although I don’t know how’ll or if they’ll implement ammunition limits with the Todd as they showed nothing around him. I’m guessing no and he’ll just pull clips from the ether as becoming Dante and never reloading won’t fit with the tone and is hard to balance.

On balance, the developers said in interviews that the game will be a full open world from the start so you can decide what order you fight bosses and the enemies will scale with you level. It could mean the bosses will just not use some attacks if you’re not a set level or it could be the very basic way of balancing it and they just change health and attack speed depending on level. It’s not strictly clear on the specific details. With it being the style that it is, a co-op third person action brawler, it really could be either.

What they showed was the basics of how the gameplay will work. It takes a lot of ques from Arkham in the ‘attack, dodge, counter’ style of combat. Outside of that, there’s not much to go on outside of things people have picked up on and what the developers have said.

One thing that a few watchers noticed was the stamina bar so when the developers were asked about it they confirmed what it was and the use of specials but didn’t say much about it otherwise. It sounds like each character will have their own special attacks, like Todd with have a super shot or something while Nigtwing could supercharge his sticks for super or unblockable damage. But, as with a lot of things, they’re being coy so no details were given. Considering the now second event I’m going to guess they’ll be making a big deal with drip feeding the details. For now, it looks good. Some points led me to be wary but that more on how the game will feel over how well it’ll be designed. The fear is it’ll just be too easy in a ‘baby’s first Arkham’ kind of way or if the co-op will be pushed so hard that any kind of fun will be in co-op. On the co-op, only online two-player. Only two characters per mission and no local co-op.

On the topic of co-op (layed segway) the second game at the Dome was “The Suicide Squad: Kill The Justice League”. And what was there was… nothing. Only the most basic of details with a 2022 release so it might be all they have for now.

This is the one made by the Arkham developer Rocksteady, and it’s the one where you don’t play as Batman. So it could mean that he’s not dead and you fight a Scarecrow-ized Batman. Would be more fitting if you fought The Batman Who Laughs considering the current comic storyline. With the story of Arkham Knight of Bruce infected with Joker Toxin that might even be a possibility but that’s just my speculation. Would be a hell of a tie-in to the comics if I’m right.

All I’m left with is just to speculate as there really is nothing. What they showed was a rendered trailer so no indication of what the gameplay will actually be like. It showed you can play as Deadshot, Harley, King Shark, or Captain Boomerang but they might just be four characters that fit into the 4 combat archetypes I talked about before. And no story except hints that the League will be mind-controlled by Brainiaic (not just because of the big Brainiac ship but also Sup’s eye beams were Brainiac purple and not the usual Krypton red) so even the title of ‘killing the league’ may even be in question.

That’s one that irks me most. The chance to play as the bad guys in a game called ‘Kill The Justice League’ and I’d bet you don’t and you only stop the mind control and win the day. I do hope you do get to kill them (say so make me sound deranged) but to get a DC game where you get to go full villain for once would be a treat. But as this is a sequel to a trilogy and so a franchise series I doubt they do anything major like killing all the prime heroes in that universe. They couldn’t even definitivialy kill off Bat’s so I’m expecting the same with Sup’s and the rest of the league.

I was a 4 player co-op action action game that was announced as with a rendered trailer in E3 2011. It had a fun, sarcastic tone with lots of bombast. The exact same as the Suicide Squad trailer. What the game ended up being was a generic, bland, by-numbers action shooter released in 2013 called “Fuse” with all of the sarcasm replaced with grim faced seriousness. It was by Insomniac Games, the makers of the bombast and silliness that’s in the Ratchet and Clank series. They even did “Ratchet and Clank: Into The Nexus” the same year. We’ll see in 2022 if this ends up as a ‘Into The Nexus’ or a ‘Fuse’.