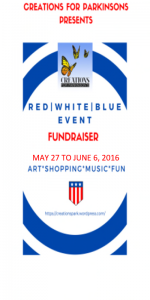 Creations For Parkinson’s, an official charity of The Michael J. Fox Foundation, is pleased to announce it’s very first annual Red, White, and Blue event! This event will take place from May 27, 2016 to June 6, 2016 and will include live djs, live performers, tribute concerts, an art auction, shopping, gachas, a hunt, and a special carnival!

About Creations For Parkinson’s:

100% of all donations go to our official Creations for Parkinson’s Team Fox for The Michael J Fox Foundation for Parkinson’s Research. Please be sure to watch our award winning video about the benefits of SL for my 87 “years young” RL Mom who has Parkinson’s. This will touch your heart! Ebbe Linden (CEO of Linden Labs) has called this the most important video ever made about Second Life! The Drax File: World Makers- Episode 13 Creations for Parkinsons:

Second Life is one of the largest 3d rendered virtual worlds withover a million of users logging its grid everyday.  Created  by Linden Lab in 2003, it allows its residents to explore, create, socialize and take part in events, group activities and much more. Second Life residents also take part in several different charity organizations such as Relay for Life and Stand Up to Cancer. Second Life also has its own virtual currency, allowing residents to shop and trade.  It is free to join.

Avengers: Endgame Set to Become the Film of 2019

What’s Next Focus: Focus Home Interactive in 2019: Part One

InWorldz is in trouble and need YOUR help