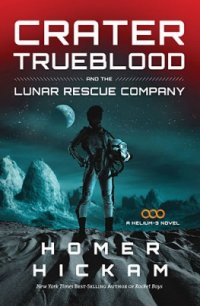 Crater Trueblood and the Lunar Rescue Company  is not a book you can read on its own.  There are two other books in the series, making this the third and it shows. Unfortunately I have not been able to find the others and thus will be reviewing my copy as a stand alone and it is not easy to do so. Since this book heavily relies on readers reading the first two in the Helium 3 series, you will be confused and lost for most of it. The idea behind the story is interesting I have to admit. Humans have now colonized the moon before the beginning of the book, there was a war between the new Lunians and those left on Earth. That is honestly all I got from that of a back story.  Our protagonist for most of the story is Maria who was at one point the title character’s girlfriend. There seem  to be some tension there but it wasn’t well explained. It was more of a ‘she loves he but left hi,  she hates him because she left him ‘ thing going on there and I found her the most annoying character in the whole book.

“The Earth is devastated and the worst elements of humanity are determined to take over the moon. It’s up to the settlers of the harsh, gray moon to fight back.

Kidnapped by an evil group intent on the destruction of the world and capture of the moon, Maria Medaris, co-leader of the moon’s richest and most powerful family, initially fights for her life, but is soon dazzled by the promises and enticements of her captors.

Crater Trueblood, once rejected by Maria but still in love with her, and Crescent, a female bioengineered warrior fiercely loyal to Crater, use their cunning and deadly skills to come to her aid.

But will Maria be on their side when they get to her? And what of the Earth itself which is in the crosshairs of a destruction not seen since the massive extinction of the dinosaurs?

The fate of two worlds hangs in the balance”

From the writing style I suspected that  it was written for young adults. I disliked it very much. At no point was I drawn into the world of Crater Trueblood and I found myself asking for explanations that I had to look up online. There is a moment at the beginning of the book where Maria goes into space it doesn’t give a description of space nor her surrounds,what she was feeling during the flight. Something to pull the reader into the world. Instead it states plainly that 20 minutes later she arrived her destination. I couldn’t help but think that was a wasted experience.

There isn’t a lot that is  really explained in the book, even if it was the third book in the series. It feels like the author assumed that the reader read the first two books and coming in at book three meant I was completely clueless about the story. It wasn’t until I looked up a summary of the first two that I somewhat understood the background. The third book for me was a bit lacklustre.  I would have loved to hear a bit more about the war they reference to in the book.

All in all Crater Trueblood and the Lunar rescue was not appealing to me. Which is a shame because it sounded amazing, I would have loved to hear more about the war between Earth and those who landed on the Moon.  if you are interested in it i suggest reading the first two before going onto the 3rd or you’d be very clueless.

Crater Trueblood series is available online or in any of your local bookstores.