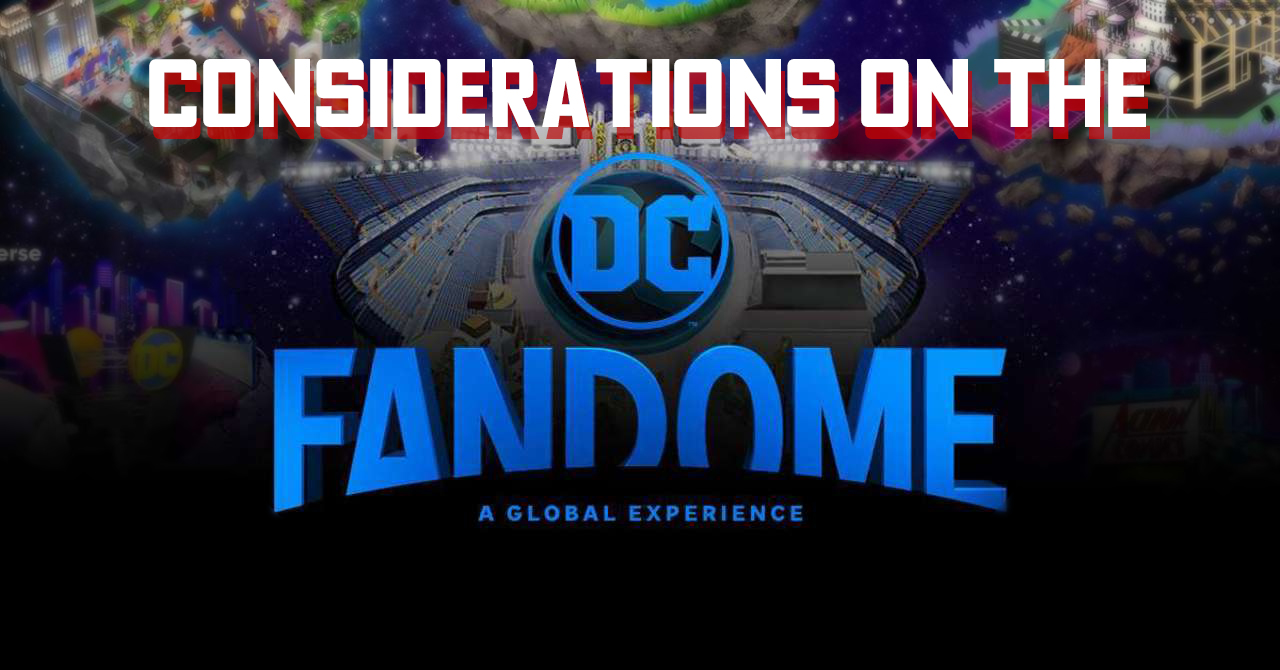 Considering it was meant to be Gamescom this coming week and that both San Diego Comic Con and E3 were canceled, DC hasn’t had a big blowout event to announce things. It’s rival Marvel hasn’t either but with them having the established MCU and announced all their movies and TV for the next few years they didn’t strictly need one, even with Covid production delays. Even on the games side of things there was already “The Avengers” which is slated for a 4 September release after a push back in the schedule, “Spiderman 2” for the new gen consoles (whenever they come out) and the Miles Morales “Spiderman” stand-alone announced last year. But then there’s the stuff going on inside DC as well that will need talking about.

One of the big bits of news that I don’t think DC wanted going into the FanDome was the reports from Variety about big layoffs within Warner Media who owns DC as well as HBO, CNN and many others. Other reporters going into the numbers seeing that DC Publishing (the comics arm) is having/had a big cull of its management staff with them seeming to move away from monthly issues as sales continue to decline as they have done for many years and bolster their graphic novel division as sales are up over lockdown. The sole person from DC Publishing management at the event was Jim Lee who is now CCO (Chief Creative Officer) of DC as a whole. For a comparison, that’s the title position MCU executive producer Kevin Feige has with Marvel as of last year. It’s the over-watcher for all the creative works to try and make things cohesive especially with connected universe stories. The company’s ‘Loremaster’ as it were.

So DC needed a big blowout to get things announced and to quell any discontent that might be hovering around because of the news. An attempt to try and avoid potential backlash like when they u-turned had on Zack Synder’s cut of Justice League last year.

The need for an eye overlooking the whole DC Universe is one that, in my opinion, is sorely needed. DC likes the idea of multiverses, multiple universes that interconnect into a web of stories. That’s different to a connected universe like the MCU as that’s just a straight line instead of a web. A list of direct sequels instead of side projects and no cross-media integration. I’m making my own via our Twitch streams called the Omniverse. But the DC Universe has always had a problem of being… frankly a bit of a mess. When the image of how you show the multiverse needs an appendix, there’s a problem.

They talked about the multiverse in the FanDome but it really cements DC’s ‘have the cake and eat it too’ mentality to the multiverse. They want to have a multiverse in its fullest way but it means that direct continuity will always be a problem. Going by the current TV and film continuity; there’s two Flash versions (both Barry Allen as well), at least two (maybe three) Batman’s, two Supermen, but still only one Wonder Woman and Aquaman. And that’s just the parts that interconnect in some way. “Joker” (2019) is part of the multiverse too but has no impact outside of its own universe. With the new DC Universe name branding on the comics, they’ve gone full Games Workshop and everything that officially carries the name is canon. If it doesn’t fit, it’s just a different universe.

The example of how complicated it can get, the comic universe has had multiple do-over resets just over the last ten years to get everything to fit;

In 2011 there was “Flashpoint” which was a new universe and as well as led into a total multiverse change in ‘The New 52’ the same year. Then in 2015 there was “Convergence” which reintegrated pre-Flashpoint stories, which was itself a lead in to the 2016 ‘DC Rebirth’ line. This went for a few years before leading into the total overhaul of 2017’s “Doomsday Clock” where they integrated the 1980’s graphic novel “Watchmen” into the DC multiverse. But as soon as that ended they started the currently ongoing 2020 “Dark Nights: Death Metal” story that will seemingly overhaul the multiverse again as they cross-over/merge multiple universes through the ‘Batman who Laughs’ characters. In the past, namely in the Crisis Trilogy, they say that there are only 52 universes in the multiverse (it’s why ‘The New 52’ is 52) so they keep having to condense worlds together to make it fit into the multiverse lore purview.

While they did talk about the multiverse for a while it was much more in a general sense. They decided to split up the FanDome into two events with the next one in September called ‘Enter the Multiverse’ which looks like it’ll go into more detail about the canon and answer more fan questions. Frankly I don’t know why they decided to split up the FanDome as this first one had a lot of filler.

The full TimeWarner family had a slot no matter how well it fit. At least segments like having Fiona Nova from Rooster Teeth (who’s owned by Fullscreen who is owned by Time Warner if you wanted to know how that fits) was a gaming bit with the Wonder Woman cast and crew. I genuinely thought it was something that was going to go up on the RT site as a promo for the FanDome and not in FanDome. I like Fiona but it was just time filler so they could get to that 8 hours repeated three times to call it a 24 hour event. Fitting even worse was CNN having a segment which was about the Coronavirus and nothing to do with DC and Warner Brothers. It was just ‘we have a reguler news segment called ‘CNN Heroes’ so that’ll fit’. Right now, I have no idea why they decided to cut the Dome into two parts. We’ll see how the second one goes I guess.

This is where we need to bring up one of the overall issues with the FanDome event and that was it leaked like a sieve! Images for ‘Kill The Justice League’ leaked several weeks ago so developer Rocksteady had to confirm it early, Both Synder’s Justice League and “The Batman” film trailers leaked several hours early because DC accidentally showed them in international broadcasts. Considering the whole event was pre-recorded and edited and only airing via their in-house stream they still had way too many technical problems. Doesn’t bode much confidence on their tech department or streaming ability.

We’ll be talking about the trailers over a few posts so here’s just my final thoughts on the event as a whole. It was fine. It felt like 8 hours at times with a few of the panels. The shortened segments like the re-dubbed animated segments (standouts being the Harley Quinn Q&A and the Batman Beyond rifftrax over Adam West Batman which were hilarious) or the cut-down Flash film panel were much better. Only makes me think that a shorter version of the Dome would have been an easier watch. If this is the future of how these media briefing events will be like from now on then I’m not wholly on the hype train. Still just at the station watching the trains go by. That might just be event fatigue as I still have the “Gamescom: Opening Night Live” on the docket.