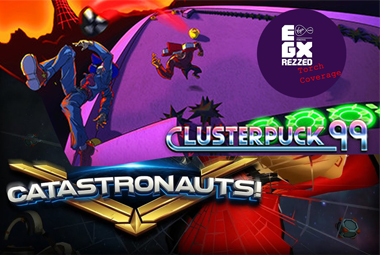 I’m glad local co-op games are back in fashion, especially with consoles. It was one of the things that consoles have over PCs. Online multiplayer is fun and all but nothing really beats having friends over for a game. The style of game that brought it back to the larger consumer eye is the one-screen multiplayer game, which both of these games are made in. Two totally different games but there has to be something when pairing game up for these write ups. 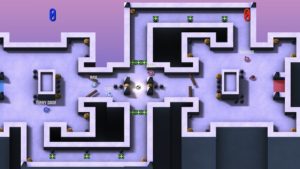 The first is ClusterPuck 99. You are a puck and with a maximum of 8 players per game there can be quite a cluster. It is the year 1999 and humans have merged with pucks, or at least just given themselves puck shaped heads. Those that are pucked become pucks in the game of Clusterpuck in the year ’99, hence name. Yeah, the trailers has a big 1980’s-ish parody feel but there isn’t really anything 80’s in the game besides being coloured in neons. And being set in ’99 instead of ’89.

It’s a sports game where the goal is to get a ball into the opposing teams goal but the maps weird shapes and have pits, spikes, and other hazards in it. You have a dash but when you have the ball it becomes a throw. That’s it.

That’s the one problem the game has, it’s a very shallow experience. When you do have players huddled around a TV (the demo I played was on Switch and this is a game made perfect by its mobile-ness) it can be very fun and extremely addicting. But there’s no online multiplayer. The developers said they wanted to bring back the essence of local multiplayer and they certainly did. But after that, I’m not so sure how deep the experience goes. On consoles like the Switch it’s designed near perfectly because of the design of the Switch. It’s good for the other consoles as ling as you have enough controllers. Not sure how many people would have 8 Xbox controllers laying about to each their own. On PC that chance gets even rarer as the controllers are the extra.

I don’t want to be to down on the game as I do recommend it but heartily on Switch and if you have the controllers on Xbox and mobile systems. I would recommend it on PC but that’s pushing the line on when people have for the system. PC’s are more built for online multiplayer and wit no online multiplayer it’s always going to feel a little stunted. So overall, its perfect for Switch, mostly perfect for all other consoles, and good for PC as long as you can support four players on one system. 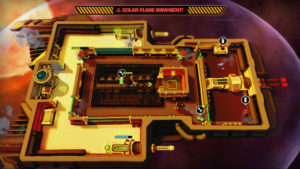 Catastronauts is another local multiplayer game but it feels more substantial. It’s the first big game release by Inertia Game Studios who at the point made browser and app games. And it’s a strong opener.

You are a crew member on the starship Idontthinkithasanme and you are tasked with not dying. Which is hard because as soon as you teleport in the ship is under fire by aliens. So you and the rest of the crew must run about the ship fixing it, putting out fires, and firing the lasers. If you sense an Overcooked vibe then you’d be right but only in style and not in design. You can get hit anwhere on the ship so where there is open floor, there can be cracks and fire. And when there isn’t floor there can still be fire. And those not floor things can be hit but they just break. And some need batteries to fire. And you can die.

This is why I say is similar in style but not design as Overcooked can just have you standing in a burning kitchen saying “well I’m fired”, while in Catastronauts you can be standing in a space ship saying “Now there’s a hole into space. And now the rooms on fire. And the guns exploded. And the suns exploded. And the ships exploded and now I’m dead.” It can become total chaotic madness and death and it’s brilliant.

An example I would call it is ‘FTL’ but from the crews perspective. The four of you have to man a ship and if you don’t do it properly you all die. It an interesting idea but I don’t think the comedy styling of the game would fit in a story that takes itself seriously.

It is really fun and I really enjoyed playing it but it run into the same issue as Clusterpuck. On consoles it’s great. They’re both coming on on Switch (for Catastronauts it is going to come to Switch later) which I think is perfect for these types of on-screen multiplayer games, each switch being two controllers. For the other consoles it’s good but limited on how many controllers you have (I’ll always think 8 is a bit much unless others BYOC). The same can be said for PC but there’s the other hurdle it not being a controller centric platform which limits numbers more.

Like I said, I like both of these games and I really do recommend them both. Just make sure you have enough controllers to play for whatever platform you get the games. This this turned into a recommendation for the Switch…