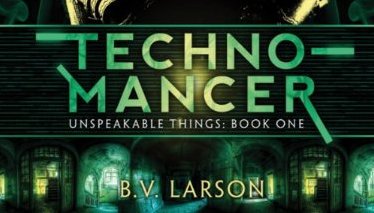 Quentin Draith wakes up in a hospital bed, groggy and unable to remember who is and how he got there. After escaping from his 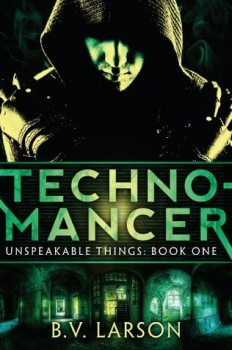 room into the halls, he finds that he’s not in a hospital but in an Insane Asylum and that the manager of the place, Doctor Ming is waiting for him. She tries her best to explain to Draith how he ended up in the asylum and sends him out into the world to find answers to who he is and what happened. He soon finds himself dealing with strange events, different dimensions, alien beings, cults and other unspeakable things that soon has him wishing he had just stayed in the asylum.

At first glance Technomancer seems to be an awesome action sci fi adventure about a man who wakes up in a sanitarium to find that he’s tangled in some unpleasant, unexplainable events. Yes, I will without shame say that I thought this book was based on the RPG Game Shadowrun, which made my disappointment with this book deeper than it would have been.  In truth while the premise is pretty good, and sounds awesome, the book itself isn’t very interesting. The plot goes from him escaping from the Sanitarium, to him trying to find out how he was brought there, to finding out how his friend was killed, to finding the husband of a woman who disappeared in the bathroom of their hotel, to him dealing with a mob boss, to him dealing with cultists, and finally being hunted by extra terrestrials dubbed the ‘Grey men’. There is just so much going on, it wasn’t very focused, and because of this, by the end of the book you are still left with questions, since nothing is really answered. Yes, the mystery around the missing husband is solved, and the cultists to an extent. However the mystery we started with, who killed his friend,  goes no where, I’m assuming that it was left that way to get readers back to read the rest of the books in the series but, I don’t care nearly enough about finding out any more about it.  The book follows the ‘film noir’ genre, complete with wisecracking protagonist and of course, breathless female characters who basically throw themselves at our main protagonist. I should be made about the way female characters are portrayed in the book but, not even this made the book stand out to me. It was just wasn’t very interesting.

If you want to check out Technomancer it’s available on Amazon, Audible and your local book stores.