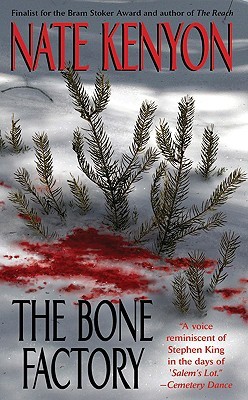 The Bone Factory is the most immersive reading experience I have come across recently. Its story is pulls you in completely from start to finish. I enjoyed it immensely. It begins with blood shed giving you a little taste of what’s to come but you never know when it is coming.

What is The Bone Factory? It is a thriller, filled with isolation, paranoia and insanity. David Pierce and his family, wife Helen and 4-year-old daughter Jessica, move to the Canadian town of St. Boudin, after he accepts an engineering job at the local power plant. St. Boudin is a town that is isolated, miles upon miles of woods; snow covers roads and not much else. David moved his family in, right in the middle of the biggest snow storm in history and there happens to be a very well-trained serial killer on the loose.
I have to admit I loved the idea around the story, being isolated while being surrounded by people just because of the snow and in Canada no less. It’s just brilliant. Characters are another strong part of this book; David is a great main protagonist, he’s very much an every man and a lot of people can relate to him, especially when comes to our modern economic situation. He is just an unemployed man who is trying to provide for his family, he takes a job that pulls them away from the city that they love to the middle of nowhere and it ultimately puts his family in danger. I also like his wife Helen, she not just the wife, she is a mother who is worried about her husband and her daughter from the start she is supportive and reasonable about David’s unemployment situation and while she doesn’t want to move from the city she knows it’s for the best and damn can that woman fight. Don’t play with mommy. Young Jessica is another interesting character; she has a Carol Anne from Poltergeist feeling to her, that creepy little girl who knows things that a little girl shouldn’t really know.

I like the different narrative point of view, seeing the situation through the eyes of the police, the doctors, some of the towns folk, all feeling the paranoia, its nice peeking into their heads. Everyone has a unique personality. The descriptive language is flawless, particularly the parts that had to do with the snow and the cold. It was very cold outside when I read this book, I came to the chapter in which a character was trapped in a freezing shed in the middle of the snow storm and I swear I could feel the cold biting at my finger tips and toes. I had to turn up my thermostat and get a blanket. That being said, there is a tiny part that I can’t get my head around. I think it could have focused a little more on the Company, its members and the power plant, there are interactions with them through David but it is pretty much hidden behind everything else. That is the only complaint I have. The theme of insanity is the core of this book and it is what made it for me.

Overall, I enjoyed this little crazy thriller, the characters are relatable, the setting is scary and chilling and seeing giant spiders, no thank you. There isn’t a lot of change for David or Jessica but Helen, I love her, she kicks some butt. If you want to check out The Bone Factory, it’s available on Amazon, and your local book store.

(Credit for theimages used go to their owners.)