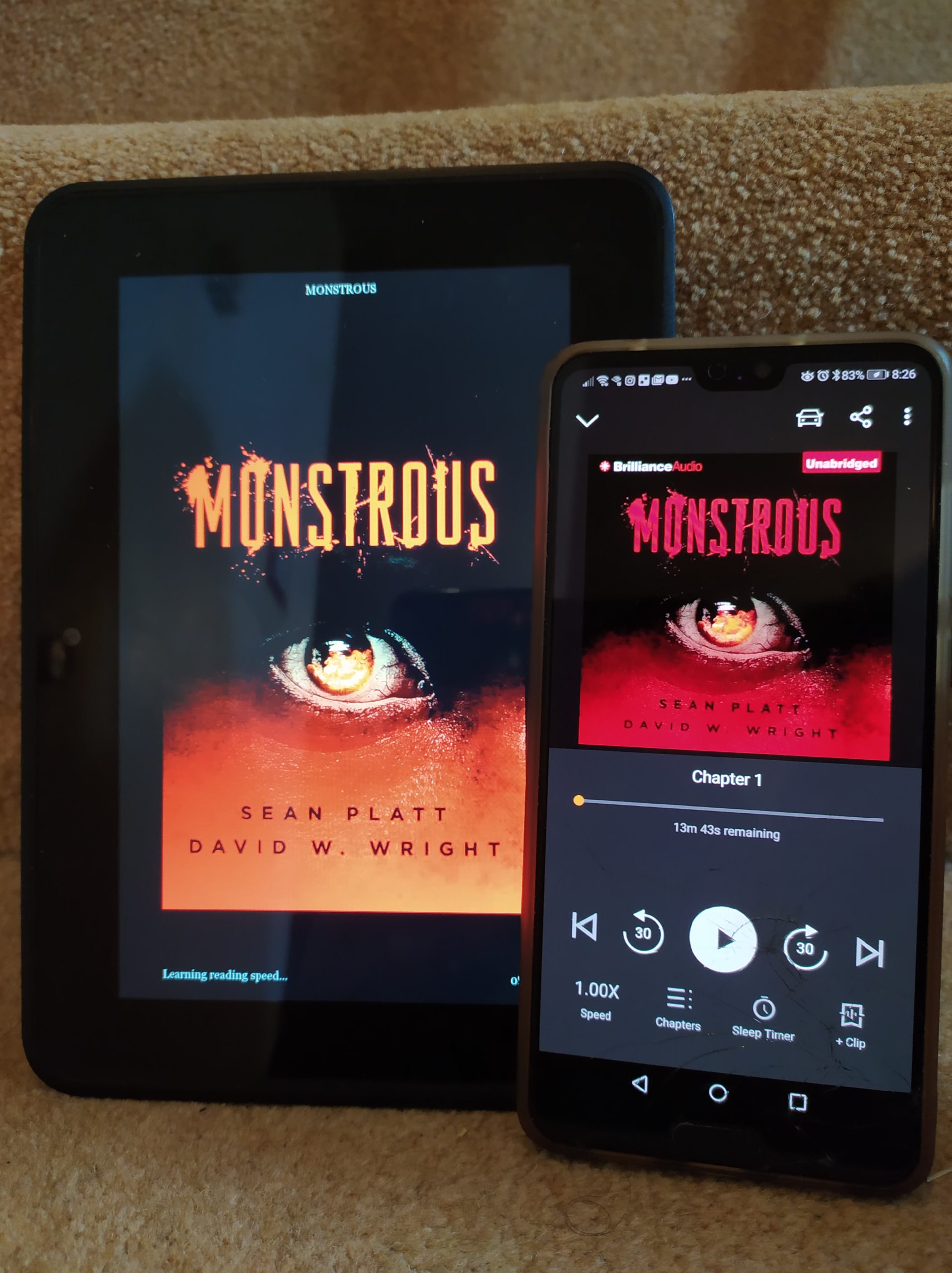 Monstrous by Sean Platt and David Wright is a book that has good points. Its premise is one of my favourites, what happens after death. Henry Black just died. He and his family were attacked in their home. He finds himself in limbo, confused and frightened he makes a hurried deal with a demon named Boothe to get back his family. He returns to the land of living but not as the Henry he knows. He is now a monster.

That sounds awesome right? The story is good; it is a classic revenge story, guy gets killed comes back from the dead to get his revenge on his murders. This book could have been awesome. Unfortunately it falls flat for several reasons a massive on being the protagonist, Henry. He is just awful, just the worse person in that universe at that moment. He didn’t start out like that right out the gate. At first I was rooting for him, I wanted him to get his revenge and save his family but by the end I just wanted him to be real so I can punch him in the face and tell him to grow the hell up. I hate him with a passion. I know I don’t normally spoil books or plot points but with this book I have to make an exception because I have to explain why Henry is such a horrid character.

First, I have to cover the undertones of the book. Well, I say undertones but it basically beats you over the head with it. In this book Heaven, Hell and Limbo are proven to be there with the big man upstairs watching us all.

Henry is a non-believer, and while he accepts that God exists now, he doesn’t fully understand the concept of Free Will. Throughout the book, Henry has to make a choice and every time he makes the wrong one he blames God for it. Not himself for making the stupid choice in the first place, nope he blames God. Henry doesn’t take responsibility for anything that he does. Boothe tells him not to let anyone see him, Henry isn’t careful and someone takes a picture him which ends up on the news. A religious cult sees this and dresses up as Henry goes to a church and kills several children because Henry killed a few of their followers ‘It’s not my fault.’ Says Henry. This is a mirror of his life when his wife, Samantha, talks about what Henry was like when he was alive. Henry was a comedian , his wife worked for a charity organisation that helped women who were in abusive relationships. Henry made a sketch calling the organisation ‘Waah’ which resulted in his wife getting fired from a job she loved. ‘It’s not my fault, they got offended too easily. ’ Says Henry. The final nail in the coffin for me was near the ending,. It made me not want to continue the series.

This is the main story Spoiler if you don’t want to know the ending stop here!

Throughout the whole book Henry is like a 5 year old. he wants it right now! Nothing is going fast enough for him. He wants it so he has to have it. Roland, the angel from limbo tells him not to believe the demon Boothe, not to trust him. He wants to save his family; Boothe gives him a way to get back to Earth so he goes with Boothe. He acknowledges that he knows Boothe will trick him, fine a father will do anything to get back to his family. How honourable.

He gets back to the land of living and kills the first person who killed him and he finds out that his daughter was also killed. He decides that it is his job to clean up the streets of any one who he deems to be evil, this gets on the news and ..well I told you the result above. Priest Owen, of the church he and his wife went to, is the Second person to warn him against believing Boothe and tries to talk him out of killing people, telling him that redemption is still open to him, he just needs to stop go back to Limbo. Once again Henry acknowledges that Boothe maybe trying to trick him but doesn’t stop. Angels are the third warning. Freaking Badass Angels, called Trackers, come down from Heaven to wipe out his soul, freaking Angels come to him to kill him. Yes, he is saved by Boothe but one would think that maybe, just maybe he would think, ‘ Angels are after me maybe I should stop this. I don’t remember Angels from the bible coming down to wipe out souls on Earth something is up.’ Nope! It isn’t until Roland comes to him his Fourth warning, when he begins to think, ‘ Yeah, maybe the Angel is right, maybe I should stop this and go back to limbo and be with my daughter.’ Then he finds out where the last person who killed him and his daughter lives and he goes right for him. His final warning comes in the form of his Daughter. The person he is getting revenge for comes to Henry and says, ‘ Daddy don’t do this. Please come back to Limbo so we can be together. Everyone is telling me that something really bad is going to happen if you do this.’ Henry final starts to listening to his daught- NOPE he kills the final guy and finds himself back in limbo. Guess what? The really bad thing that was going to happen? You know the redemption thing that everyone he encountered was trying to tell him about? It was that if he continued his revenge, his daughter was going to be sent to hell. He blames Boothe for tricking him (This pissed me off immensely because He knew Boothe was tricking him but he did it any way!) He blames Roland for not trying harder or telling him that, Emily going to hell was actually going to happen ( up until that point he thought that HE was going to hell) and he blames… say it with me…
GOD!

Argh, Henry is the most pathetic, annoying, selfish, ignorant Character I have ever had to read about. He was an awful person in life, using his comedy to hurt others and then saying ‘ It’s your fault not mine’ and he continued to be an awful person after his death. He blames everyone, EVERYONE else a opart from himself for everything that happens due to his actions. If he had just been patient everything would have worked out for the better, but no Henry had to have everything RIGHT NOW.

There is bit where Priest Owen and Henry are talking, Henry continues to go on about how he is cleaning up God’s mess. Priest Owen is trying to explain free will and Henry comments that certain people shouldn’t be allowed to have it. It just reminds me of the Parable ‘The Grand Inquisitor’ it goes, Jesus returns to Earth during the time of Inquisition, he is put in a cell by the Inquisition leaders and the Grand Inquisitor visits him and comments that Jesus is no longer needed by the church. After he tries to tempt Jesus by telling to turn stone into bread, call for angels to save him or take rule of the world. The Inquisitor comments that humanity cannot be given freedom that Jesus’ fault comes from the fact that he does not make humanity worship him so he, the Inquisitor, forces them to by taking away their free will. If that happened Henry would be the FIRST PERSON to cry out for his free will. Saying that’s not fair and blaming God for it.

Monstrous is not by all means a bad book. I did like the character of Boothe and if it followed him and his back story, I would have been more than happy to continue the series, but as it stands I’ve had my own fill of Henry and his whining. The book is currently available on Amazon and Audible. I got my copy from Amazon Kindle for Samsung.