The first time I saw “The Adventures of Bertram Fiddle: Episode One: A Dreadly Business” abuse of the colonisation, was at MCM London in May 2015. I even got to interview the games writer/illustrator/producer Sebb Bernett. I didn’t play it there but I knew it was a point-and-click game. The genre of game that is not really defined by gameplay so playing it for a few minutes while a crowd swirls around you, judging you as you play, it’s not really going to be fair for the game. It’s all about the style and the writing. And hopefully less of the olden but well known Sierra Deaths because that stuff was bollocks.

Thankfully, Bertram Fiddle is not the sort of game that kills you just because it doesn’t like you. If you saw my play through, I didn’t die once. I like to think it’s because I’m clever but considering my fumbles and recording blindness through some of the puzzles I guess not. It must just be a well designed game then. 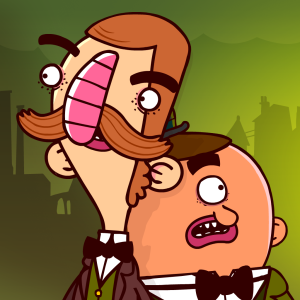 On the subject of the puzzles, I have only one complaint. They were kind of easy. Not in the sense that you given an item and then you use it in the same room or they gave up making them as the development time got longer. It was the kind of easy where the solution was so heavily telegraphed no thinking was involved. It’s the sort of puzzle where your given a square peg and then presented with a square hole a few rooms later. There were a few interesting puzzles mind. There was one where you got an item early on and had to carry it to the end but they made sure you picked it up as it was used in another puzzle where it was combined with something else before you could leave. A few made you think around the problem for the solution like the ‘candy for the kids’ puzzle. For that matter, the whole riverside section was the stand out section of the game with many of the puzzles revolving around exploring and adapting items for solutions. But most of the puzzles throughout the game where the usual fill you pockets with all the square pegs you can carry and start looking for holes. That’s not a bad thing. It just has fleeting satisfaction. “Yeah, I solved a problem but it was hip-thrusting at me and making rude gestures so beating it was more deserving than satisfying.”

The one area that shines is the writing. It has many puns, which by the nature of puns can sometimes be hit and miss, and many pop culture references. Unlike other games I doesn’t wave the pop culture references around and beat you over the head with it. It just has them. At times you can almost hear the ‘ba dum tish’ as the line goes by but they don’t really dwell on them so I’m more willing to forgive them over it.

The writing on the whole is very good. You’ll certainly be laughing from beginning to end. Bertram and his man Gavin are well rounded characters that get kind of cliched at times, in a Victorian “Hot Fuzz” kind of way, but the style and the writing gives them enough of a boost to make them stand above it becoming new characters in their own right.

One thing that I found very satisfying was the darker undercurrent that game has. Playing it again later made me see how deep the darkness goes and I really hope they keep it. Or, considering the ending, hope they delve deeper. The darkness can really be seen in characters like the totally is but not called vampire and Lord Arthwipe, a man who is not specificity evil or maleficent but just gets more unsettling with each meeting. Most of the secondary characters are as rounded as Bertram and Gavin to the point where I wanted to see more of them. It’s quite a testament to the writing when I want to see more of all of the characters rather than follow the duo protagonists by themselves. It helps the world feel full and active rather than a world revolving around the leads. 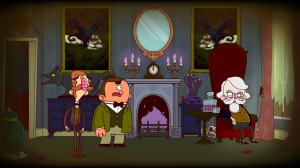 The biggest problem the writing has is that the game gets blazed through so quickly, mostly because of the pretty easy puzzles, the plot has to go just as fast. You can quickly go from event to event, puzzle to puzzle which doesn’t give the time for the story to even get it’s coat off and really settle in. This ends up making the game pretty short. I’m less willing to be less overly critical of that specificity because that can be dodged in favour of just making more regular games. The “Episodic Gaming” method is something that only Telltale seems to have mastered by this point but is something they seem to be aiming for (and with their successful Episode Two Kickstarter it seems to be happening) so if they pull that off effectively all can be forgiven.

So where does this leave the game? Well it may be strange to say but the one change the game could have for future episodes is a more brutal nature and be ‘harder’. Like I said, many puzzles follow the square peg system and it would be good to have harder puzzles or puzzles that take some round about thinking. Another way to make the game harder is to be more brutal, by that I mean more willing to kill the player. It creates urgency and helps the plot move forward. This tactic is harder to design. There was reason to why I mentioned Sierra at the start of the review.

Episode One is a great starting off point for the series, introducing the characters and the setting clearly without getting bogged down in narrative dumps. On top of that it is funny and has a style all its own. It is pretty short but if they can get anywhere near an episode out per year (or quicker) then it’s briefness stops being an issue entirely. I for one can’t wait to see where this goes.