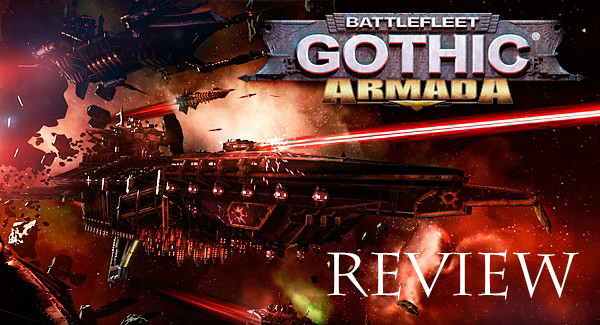 The first sentence of this review should be saying that I haven’t quite finished the single player campaign. This is because the game is a) quite hard, and b) I’m quite bad at playing it. Seeing my play time for a mostly completed single player campaign clocking in at 50% more hours then others can finish the whole thing in, is a pretty good sign at my skill at the game. It was an emasculating moment as well when I dropped down to easy mode after re-starting twice on normal and resoundingly failing. Although, on an interesting point, when I started playing the multi-player and was fairly good. Playing the same mission a dozen times must of made me better at the cost of actually finishing the campaign. Although, plot wise, I can make a good guess to the end game and the end plot as it feel like I’m more then knee deep in the end game at time of writing. The HUD plot attributes block was full and the end game plot that is used in every Warhammer 40k game was coming into effect. My guess is that it’s either the ‘War Priest’ or the ‘Envious Captain’ turns evil or both. Or Chaos manages to steal the maguffins with ‘magic’ or something so a finale can happen because I noticed that happened a few times for plot convenience. As Battlefleet Gothic is a sub-section of the Warhammer and Games Workshops mythos’, some of you my be a bit lost by that last sentence. So this might be a good place to explain the stuff behind and in the game. 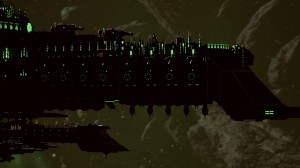 The highly designed nature of the figurines comes through in the design of the ships.

Battefleet Gothic is part of the Warhammer 40,000 (40k) mythos by Games Workshop. You either know it as the table-top figurine war games with space marines, the “Dawn of War” franchise back in the years of THQ involving space marines, or the game called “Space Marine” about space marines from a few years back. The Space Marines are the army side of a futuristic, mythical, space empire while Battlefleet Gothic is the Navy side. With Games Workshop in flux with its cannon at the moment, the figurines went out of production in 2013 and are not available to buy. But who knows. This might be the Workshops way to nudging it back into cannon. Wouldn’t be that bad because Armada is good overall.

The solo campaign sees you as newly promoted Admiral Spire heading a fleet in the contested Gothic sector of space. You find your self fighting the ship ramming and up close Orks, the swift, rapid fire but fragile Elder Corsairs and the ranged, broad cannons of Chaos through a selection of missions. The most fun missions are the ‘Cruiser Clash’ missions which is basically just a fleet vs fleet death match. Some flanking tactics can be used but most important is the way you use and maneuver your ships. You can really bring in some tactics playing these missions in multiplayer but I’ll get to that later

Other missions include the defence or destruction of an objective. Like protecting or destroying a convoy or defence installations. These mission are not great. Mostly because the best tactic is not having any tactics. When your attacking, it often comes down to ‘select all’, ‘select target/objective’ and occasionally doing a fancy spin maneuver to fire torpedoes. When your defending, the key ends up being using the target/objective as bait (as the enemy comes to you) and not bothering with the objective at all. The hardest part of the solo games is that the Imperial ships are slow as all buggery and have no range compared to every other faction. At times I just found myself out sped against the Elders and out gunned with the Chaos legions with no real recourse other than do the objective and not bother with the naval fighting. Fighting the Orks ended up being my speciality because their tactic is to ram and I have Lance cannons, Terminator Stormtroopers and care little about denting my ships so return the favour. 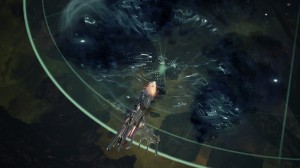 An Elder ship retreating from the fight through ‘The Void’.

The ships themselves are interlinked with the multiplayer side so have little room for any real customisation. There are several different classes of ship, going from small cruisers to giant battleships, each with their own attributes. Small cruisers are fast while battleships are slow but pack a lot of firepower. Every ship as a selection of useable skills, like an invunro-shield and searching drones, and passive traits like more armour and faster engines that can be added with leveling. Largely, they don’t do a whole lot. The skills like the aforementioned shield and drones can be useful but only contextually. Firing a searching drone at the start of the mission to find your enemy works only once as your either fighting them or flanking them by the time it recharges. With the passive skills, I could hardly tell most of the time if ships even had them.

When a match starts, you deploy your ships how ever you like on one side of the map and your enemy does the same. From there you can maneuver over a fairly large map space. Each map has a random amount or asteroid fields (that damages your ship,) and gas clouds (which hides your ship,) when you get in their area of effect. Each ship has boost thrusters which enable them to go ‘All Ahead Full’ (boost speed) and boost turn. Both highlight you to enemy so during the early part of matches you most likely won’t be boosting about but as soon as the combat starts, you’ll be boosting everywhere. Mastering the boost is the best skill of the game. I’ve used it so sideswipe, ram, maneuver for specials and force turns enemy ships.

As for proper fighting, each ship has a different configuration of weaponry. The most common are ‘Macro Cannons’ which are broadside cannons. Each weapon has a set firing angle and range. Knowing how best to use you ships guns is good. But by the time you get to the larger ships, your just going to go mid-range broadside while you wait your special skill to cool-down and fire that right into the enemy hull at point black to insure a direct hit.

Visually the game looks great. The colourful design of space they went for looks great. Seeing stuff like nebulas, star systems, suns and what look like black holes off the distance of the map help create a sense that there is stuff outside the map other then just drawing a border with the camera or leaving it empty and void. But having stuff like asteroids under the footprint of the map does make me double take at times as asteroid fields on the map can mess up your ship if your not prepared. 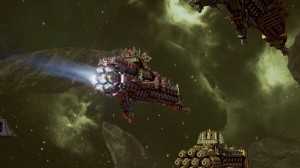 This version of space looks and feels full but sometimes obtrusive.

The sounds design heads for the classical Gothic section which fits into the universe very well. The cut-scenes are in drawn art style which looks good. As long as the dialogue being said is either narration or said by someone off-screen because the lip sync is not great. Although I only remember it happening once, right at the very beginning, so maybe they did it once and then didn’t from that point after when it turned out not that well.

One very interesting part of the game is the hardcore nature of it. One of the bast comparisons I have for it the recent XCOM games. If your ships get to damaged in a mission, you either have to wait till their repaired or spend resource fixing them. There’s even an ‘Ironman’ mode were if your ship is destroyed, it’s gone. This is a game that, like XCOM, beats you with your failures and continues on regardless if you succeed or fail. When I said there was a “HUD plot attributes block” in the first paragraph, that is the games way keeping score of your success or failures even if your not on ‘Ironman Mode’.

While I started by saying that I’m bad at this game, I’m ending by saying I really like playing it! While the game beats me with with my failures, the matches are brief and so you end up back into a new fight quickly. The design fits right into the Warhammer 40k universe and is great to look at and listen to. While there is a lack of customisation in the ships in single player, its for the sake of some balance in the multiplayer. The single player really does prepare you for the brutal and sometime hopeless fights you’ll end up fighting in the multiplayer.

At times, you really can be praying to the Emperor to protect you from the Void and it’s great. Even being bad at the game didn’t stop me from going back. It has enough complexity to give you a lot of battle options while keeping it simple and interconnected enough that its not impenetrable to new players.

The main thing I realised about myself playing this was I’m much more at home with a chainblade in hand screaming with blood and charging then commanding a Battlefleet. But even with that, I’d recommend this game. If the idea of a Warhammer 40k naval battler or just the idea of a naval battler appeals to you, this comes very recommanded. It has is flaws. But at it’s core it still is a very good, well designed naval game.