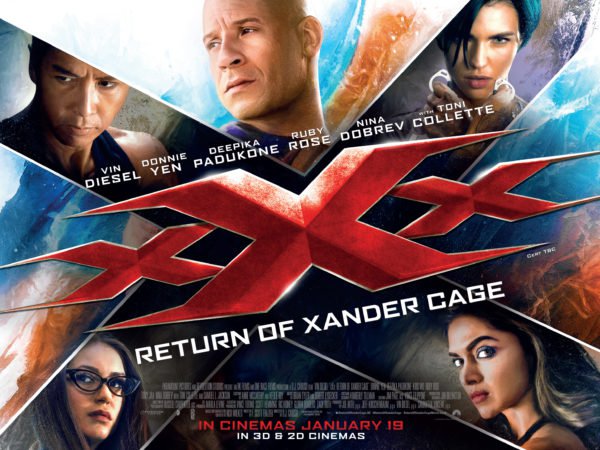 When a powerful weapon, known as Pandora’s Box, falls into the hands of the villainous Xiang (Donnie Yen), Xander Cage is brought out of a self-imposed exile to track both Xiang and the weapon down. Recruiting a team of fellow thrill-seekers, Cage’s mission takes him on an extreme journey full of corruption and danger at every turn.

Now, I doubt there were any die hard xXx fans who were demanding another sequel however, it came out of absolutely nowhere and with the other films in mind, I took my seat expecting see a lot of ridiculous action. The film doesn’t disappoint at all when it comes to this with there being plenty of fights, chases and ridiculously over-the-top action sequences, including one of the best and most ridiculous shots I’ve ever seen in an action movie. I can’t deny there is fun to be had with this film but the other aspects of the film leave it severely lacking.

The cast for this film features Vin Diesel, who clearly has a lot of fun doing some stupid stunts, Donnie Yen, who I’m glad is getting moments to shine in big Hollywood films, and a few others who pretty much just make up the numbers, Tony Jaa in particular comes out of this film criminally wasted with some weird character traits. You can see that these guys really enjoyed working together on a film like this however, they are let down by both their limited acting abilities and the downright dreadful script written by F. Scott Frazier. It’s not that an action movie can’t have a cheesy script, it’s just that it’s so damn cheesy it takes the edge off the absolutely mental action unfolding in front of our eyes.