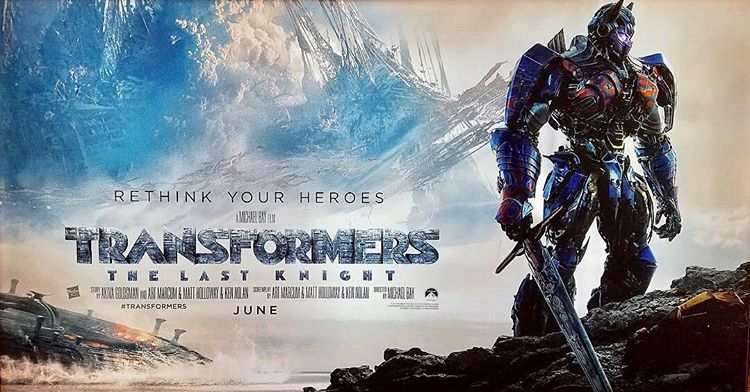 Michael Bay has been delivering Transformers films for the past ten years now and in that time we’ve had four films full of too much controversy for a franchise based around a line of toys. Whether it be the brazen racial stereotypes in Revenge of the Fallen or actually explaining the Romeo and Juliet law in Age of Extinction, Bay clearly doesn’t take the time to step back and think about what he puts in these films. The fifth film, The Last Knight, has arrived but has Bay been able to show any restraint?

With Optimus Prime gone and both Autobots and Decepticons still arriving on Earth, war has broken out between the humans and Transformers. Cade Yeager (Mark Wahlberg) finds himself amidst a battle where the key to victory lies buried in the secret history of the Transformers on Earth.

What I find so baffling about the Transformers films as they are now is why Michael Bay feels it’s necessary for them to have such excessive runtimes. The Last Knight is thankfully shorter than Age of Extinction however, it’s two-and-a-half hour runtime makes the film feel like such a slog to sit through and leaves it open for Bay to fill with the sort of nonsense that the previous films became so annoyingly bogged down with. He’s massively toned down the racial stereotypes and shooting his female leads with leering camera shots but there’s still the irritating comic relief that just isn’t funny, at all.

The story is just an incoherent mess from start to finish; opening with King Arthur at battle in a sequence ripped straight from Gladiator and finishing with a chaotic finale that does in fact link back to the opening sequence, it just there’s far too much going on between that it’s hard not to lose interest in anything that’s happening. There’s too many characters involved, Izabella and Jimmy being the prominent ones who get left out for a large chunk of the film, only to be remembered and shoved in just in time for the finale.

The script is arguably worse than it was in Age of Extinction; Cade, Vivian and Edmund actually taking time out to discuss Cade’s sexual activity. Actually, it’s not quite the Romeo and Juliet law explanation in the previous film, so there is that. The Transformers themselves get a large chunk of the cringeworthy dialogue, most of them spouting out some rubbish after everything they do.

Action sequences are something that Bay and the Transformers films can usually take pride in however, The Last Knight is void of good action sequences, bar one. The Optimus Prime vs Bumblebee fight is the only action sequence that has any sort of gravitas yet it really doesn’t last long enough. As usual, the visual effects are outstanding but they seem wasted when they film doesn’t possess the good action sequences we’ve seen previously.

Coming to the performances, I can’t really say there was a bad one in there because there just wasn’t. Mark Wahlberg proves he can carry a film again, even if it is utterly ridiculous, Laura Haddock actually gets a chance to act unlike her female counterparts throughout the franchise and Isabela Moner acts as if she’s in an Oscar worthy film, which I’ll put down to lack of experience. Anthony Hopkins gets a bigger role than I was expecting and I can only imagine he’s now laughing his way to the bank after hamming it up to the max for the cameras.

It doesn’t feel like an achievement to say The Last Knight isn’t the worst Transformers film because Age of Extinction set the bar so incredibly low. I thought this was going to be the last one we’ll see but then a Bumblebee spin-off and another Transformers film have been slated for release, so I guess this franchise isn’t going anywhere anytime soon. Maybe it’s time Michael Bay stepped aside and let some new blood into the franchise, possibly someone who hates product placement and can tell a story or is that too much to ask?