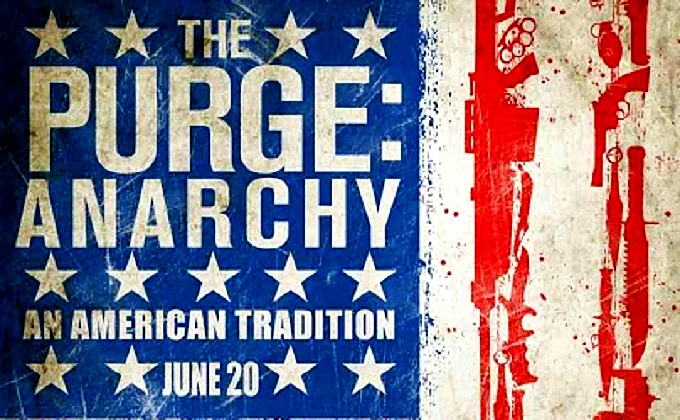 What is it with Hollywood today? I know the whole idea is to make money but if it means bleeding an idea to 100% dryness then quite frankly, people will eventually lose interest.

The Purge: Anarchy is the sequel to surprise 2013 hit The Purge however this time, rather than a home-invasion thriller, the scope is much wider. Anarchy takes place over the city of Los Angeles.

An improvement on the first film (hardly saying much) is barely a compliment to a film that is an utter mess from beginning to end. The entire film is just dumb and I really mean it when I say that I struggle to think of many positives.

James DeMonaco once again directs and the basic premise is that once a year, for 12 hours, all emergency services are suspended and all criminal activity is now legal. Anything is allowed. Some people choose to stay inside and survive the night when others look to ‘purge’ and commit crimes such as murder.

Anarchy follows couple Shane (Zach Gilford) and Liz (Kiele Sanchez), who are trying to get home before the Annual Purge begins, and Eva (Carmen Ejogo) and Cali (Zoe Soul), a mother and daughter duo trying to survive the night in their home.

Things don’t go exactly as planned and the two groups find themselves out on the streets during the Annual Purge. Here they come across Sergeant Leo Barnes (Frank Grillo), a police sergeant who himself is on a personal ‘purge’.

Barnes helps the group try and survive the night across the city.

What could have been an interesting and exciting idea ended up getting boring, and very quickly at that.

The cast just sleepwalk from point to point in the city and for some reason the writers of this film decided to include as many stupid characters as possible. If you are in this situation surely you try and go as quietly as you can, not make as much noise as you can.

The saving grace of this film is Frank Grillo as Leo Barnes. By this I don’t mean he puts in a great performance, I just mean he looks to be the only one that is attempting to give something that resembles a respectable performance. At the end of the day though, Grillo’s talents are well and truly wasted by the script and the shoddy story.

Anarchy is like sitting through a session of watching other people play Grand Theft Auto online. Just sitting there to see the violence and chaos that other people can cause and yes, once again that does get very boring.

Part of the problem is the filmmaker’s decision to leave nothing to the imagination anymore. The Purge franchise has followed the Saw and Hostel franchises in trying to show off how sick they can actually be. A film is way more effective if you imply what happens rather than showing it all to the audience.

But maybe these filmmakers don’t have the smarts to realise this.

The Purge: Anarchy is dull and easily forgettable. I make it my plea to Hollywood to put this franchise to bed and try to make some more intelligent films. I just know this plea, as always, will fall on deaf ears.

One thought on “Barton’s Movie Reviews – THE PURGE: ANARCHY”