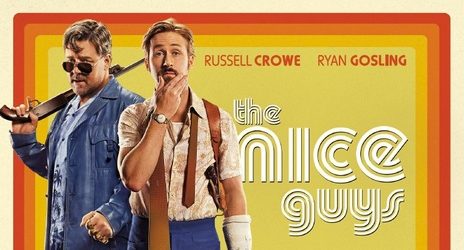 Yes, oh yes, The Nice Guys is every bit the hilarious and entertaining movie I was hoping for. Part action, part buddy comedy, The Nice Guys is the latest movie from Shane Black and believe me when I tell you, there is so much fun to be had at the cinema with this one.

Jackson Healy (Russell Crowe) is a hardened private eye who chooses violence as his method of business. On the other hand, Holland March (Ryan Gosling) is a bit of a bumbling private eye, not akin to the violent methods of Healy’s choosing.

First things first, The Nice Guys is really driven by the great on-screen partnership of Russell Crowe and Ryan Gosling, who share such an unbelievably good chemistry as the two private eyes who couldn’t be more different.

This is the best Crowe has been since State of Play in 2009 and he has no trouble at all selling the tough guy persona of Healy. The comedy was something I thought Crowe could struggle with however, having seen him do a few interviews recently and after his performance in The Nice Guys, I had no need to worry.

Crowe is funny in this but Gosling is absolutely hilarious. He proved he could do comedy in Crazy, Stupid, Love but there is so much more to the comedy he performs in The Nice Guys. A lot of it is verbal but there are some moments of physical comedy that Gosling nails, particularly one sequence in the movie’s finale that was rather quite brilliant.

The two are aided by a brilliant script, full of enough wit and quips, written by Shane Black and Anthony Bagarozzi. Black is no stranger to writing both movies and characters of similar ilk, having written the first two Lethal Weapon movies and Kiss Kiss Bang Bang, which he also directed. It’s not only Crowe and Gosling who benefit from the script either with Matt Bomer shining as the sinister John Boy and Angourie Rice almost stealing the show as Holly March, Holland’s rather persistent daughter.

I understand that The Nice Guys hasn’t performed well so far at the box-office which is a real shame. I urge anyone who likes to be entertained to go and spend two hours watching this at the cinema. Trust me, those two hours will fly by and we could do with having more movies like this being made.