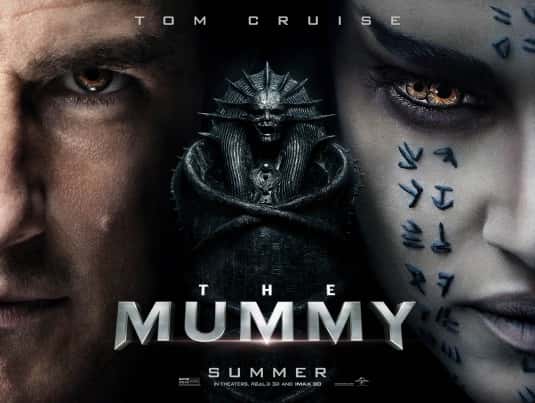 It goes without saying in today’s world that film studios seem hell bent on creating the next big cinematic universe. Ever since the success of Marvel Studios has come about through the MCU, we’ve seen the likes of Warner Bros. try similar with the DCEU, both made up of a multitude of films that intertwine with one another, and now Universal have joined the party with the Dark Universe. With the vast array of classic monsters that Universal have at their disposal, the Dark Universe really does have great potential and they’ve gone to one of the classic monsters with The Mummy.

When Nick Morton (Tom Cruise) awakens the ancient Princess Ahmanet (Sofia Boutella) from her tomb in Iraq, her terrible powers are threatened to be released upon the world.

The Mummy is an utter mess, unsure of whether it wants to actually tell a story about an iconic movie monster or just setup the Dark Universe it takes place within. Either way, The Mummy fails in delivering anything worth shouting home about. It’ll be quite interesting to see where Universal take their Dark Universe from here on in however, they could have done with making sure its opening film was at least competent.

The story and screenplay don’t really match up either. This is a universe I’m guessing will be aimed more at adults considering its 15 rating here in the UK, though you wouldn’t think that with some of the childish moments that come about in the script. There’s one standout action sequence in The Mummy, and it’s the much talked about sequence in the crashing plane which they shot in a zero gravity environment. The rest of the action is rather forgettable to be honest, including a very dull finale that lacks any sort of adventure this film should be full of.

Coming to the performances, The Mummy features the worst Tom Cruise performance I’ve seen in a while. He’s normally an actor I can depend on to give a solid performance however, he just doesn’t deliver here. He’s the big star of the film so I knew he was going to get a lot of screen time but I didn’t expect it to effect the impact Sofia Boutella has in the titular role so much. Boutella showed she can be a fierce adversary in Kingsman yet she spends most of The Mummy living in Cruise’s shadow. Jake Johnson makes for one of the most ridiculous and irritating characters of the year while Russell Crowe gives us one of the funniest cockney accents ever in the dual role of Dr Jekyll/Mr Hyde.

With the Dark Universe now setup and some future films already announced, my only hope is that they can get better from here. I mean, they surely can’t get worse, right?