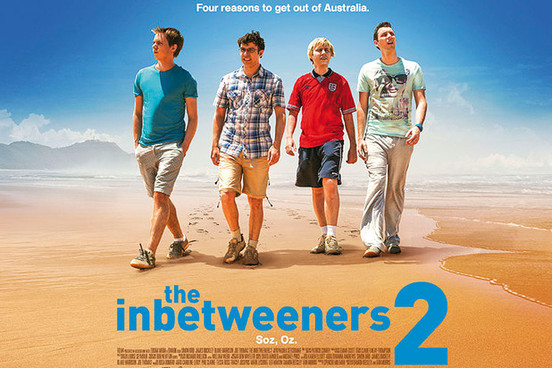 Believe me when I say you will struggle to find a funnier film all year!

First things first, I absolutely love The Inbetweeners! After the first film being so hilarious and having seen each episode many a time, I was ready for more of the unbelievably awkward situations the four lads get themselves into.

Last time out we saw them on a lads holiday to Malia that ended with all four of them coming home with a girlfriend. Roll on to 2014 and the four of them are travelling across Australia searching for the one thing on their minds; clunge, clunge and, you guessed it, clunge.

Will (Simon Bird), Neil (Blake Harrison) and Simon (Joe Thomas) set out to join Jay (James Buckley) after receiving a quite outrageous email explaining his time in Australia so far. As you may have guessed, it isn’t long before they have called Jay out on his lie and things start to get really mental.

With the mix of some great writing and brilliant comedic performances, The Inbetweeners 2 ends up being just as funny as the first film. I haven’t heard an audience at the cinema laugh so loud or so consistently in a long, long time.

Damon Beesley and Iain Morris are the men responsible for creating the show and have been on writing duties for both cinematic outings. However, with The Inbetweeners 2, the duo decided that they would try their hand at directing.

It seems fitting that the men who have written some of the funniest moments of the year get a chance to direct them and they do a stand-up job at that. Look out for an unfortunate incident at a water park and a truly weird and intimate moment shared by Will and Jay, honestly I was howling with laughter.

I very much doubt there was one day on set that you would be able to describe as ‘professional’.

The four lead characters are the main attraction as always with The Inbetweeners and each and every one of them is absolutely perfect in their role yet again. I can never decide which one is my favourite as they all have their moment to shine but if I had to choose it would have to be Blake Harrison in the role of Neil.

Playing the least bright of the four mustn’t be easy but Harrison delivers once again with some brilliant comedic timing that had me in stitches. In fact, I could probably just laugh at Neil all day long!

There is one major surprise in this film towards the end but I won’t be spoiling that for you guys as it is only fair you get to see it for yourselves. You will laugh and probably find yourself cringing too. But hey, that’s what we love about The Inbetweeners!