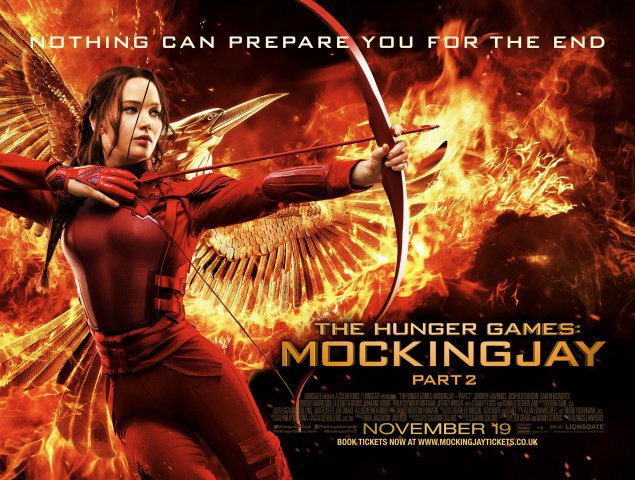 Sandwiched between Spectre and Star Wars: The Force Awakens may have something to do with this but I didn’t feel any excitement when going in to watch the final movie of a franchise that I have thoroughly enjoyed from the start.

Unsurprisingly, the film picks up exactly where the last film left proceedings; Katniss Everdeen (Jennifer Lawrence) receiving treatment after an attempt at taking her life was made by Peeta Mellark (Josh Hutcherson), who is now tied up in restraints and being kept a close eye on.

Katniss wants to bring an end to the reign of President Snow (Donald Sutherland) over Panem once and for all and to do this, she must lead the rebellion into the dangerous terrain of the Capitol, where Snow makes sure plenty of surprises lie in wait.

Mockingjay – Part 2 was always going to be the most action-packed of the four films, with all out war set to hit the Capitol, and the film certainly does a fine job when it comes to the action. It takes no time for the film to get going and when it does, you will be on the edge of your seat.

Francis Lawrence, who has directed all but the first film of the franchise, handles the action well and delivers a few sequences to get the adrenalin pumping, most notably a scene that finds Katniss and other members of the rebellion fighting a herd of monstrous creations underground. It’s a moment that some younger viewers may find quite frightening as it feels like something straight out of a horror movie.

I was really enjoying the film up until a really significant moment involving someone close to Katniss and this is where I thought the film shot itself in the foot. There had been a build up to this happening now for three prior films and in the end, I can’t help but feel that the end just felt rushed and badly underwritten. It can’t be easy writing a finish to such an epic story and with the book to go by, there isn’t too much room for change. That being said, I was left utterly underwhelmed by the final half hour of this film.

As always with The Hunger Games films, there isn’t one performance that lets the film down. Jennifer Lawrence once again shines as Katniss, a role of major significance in her career and one that will go down as one of the strongest female characters in the history of film.