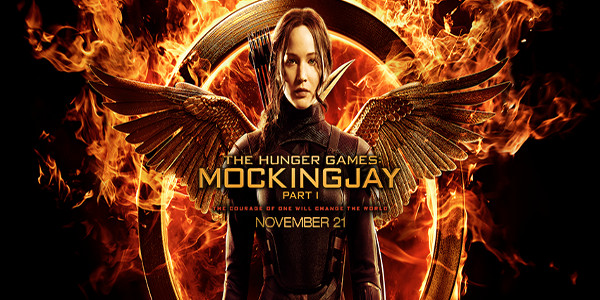 “Miss Everdeen, it’s the things we love most that destroy us.”

No other words in this film have a bigger impact than those delivered by the villainous President Snow (Donald Sutherland) to Katniss Everdeen (Jennifer Lawrence).

The Hunger Games: Mockingjay – Part 1 is the penultimate film in The Hunger Games franchise and it is a franchise that follows the trend set by the Harry Potter and Twilight series in splitting the last book of the series into two films.

The argument as to whether this is now done to make as much money from the franchise or to do the last book justice on screen is one that could leave you blue in the face. As much as I think the financial side of things plays a part, I am glad that, with The Hunger Games in particular, they don’t try to cram everything into one final film.

Mockingjay – Part 1 picks up where Catching Fire left off. Katniss has been rescued from the arena and is being kept away from the eyes of the Capitol in District 13, thought by many to have ceased existence after a previous attack from the Capitol.

Here Katniss discusses with President Alma Coin (Julianne Moore) and Plutarch Heavensbee (Philip Seymour Hoffman) her importance towards the revolution against the Capitol. They want her to become the Mockingjay so people will stand up and fight in the war.

All Katniss really wants is to get Peeta (Josh Hutcherson) to safety and at first she declines the offer however, after seeing the damage the Capitol have done to the other Districts, including her native District 12, Katniss agrees to be the Mockingjay and lead the revolution.

Mockingjay – Part 1 is all about Katniss accepting the fact that she is the face of the revolution and her relationship with Peeta. It really does frustrate me then when people are claiming that nothing actually happens in this film.

It would be fair to say that the film is lacking in action compared to the first two films giving it more of a lacklustre feel but this film is used to further develop the characters and set up the franchise for the big finale, which I’m sure will involve a lot of action. It is much like The Deathly Hallows Part 1 in the Harry Potter series in that sense.

It is a bold move to leave the audience with hardly any action but it is one that I applaud as there was no point in this film where I felt bored. I was engaged by the story and it did the most important job in making me want to see how it all ends in the last film.

There are some genuinely great moments in Mockingjay – Part 1 including a scene where rebels blow up a dam providing the Capitol’s power while singing in unison “The Hanging Tree”, a song sang by Katniss in one of the revolution’s propaganda films and the moment the rebels enter the Tribute Centre in the Capitol to rescue Peeta. The latter of those scenes including an impressive shot that had me raising my eyebrows in approval.

With a film that prioritises story and character development over action it is important to have a cast that are capable of delivering the performances needed to engage the audience. This film has that in abundance.

Jennifer Lawrence once again plays Katniss with an enormous amount of passion and courage that makes the moments of vulnerability hit the audience even harder. She may have won an Academy Award for another role but without a doubt Katniss Everdeen is the role that people will ultimately remember her for.

Lawrence has an array of talent, all of varying experience, to work with including the likes of Philip Seymour Hoffman, Donald Sutherland, Josh Hutcherson and new addition to the cast, Julianne Moore. Not one of them phones in their performance and they clearly all have respect for the source material.

While Mockingjay – Part 1 isn’t the best film of the franchise so far, it does do its job well of setting up the series for its big finale. It might be a year away but I predict that it is going to be huge. If the ending of this film is anything to go by, I think it should be quite an emotional one as well.