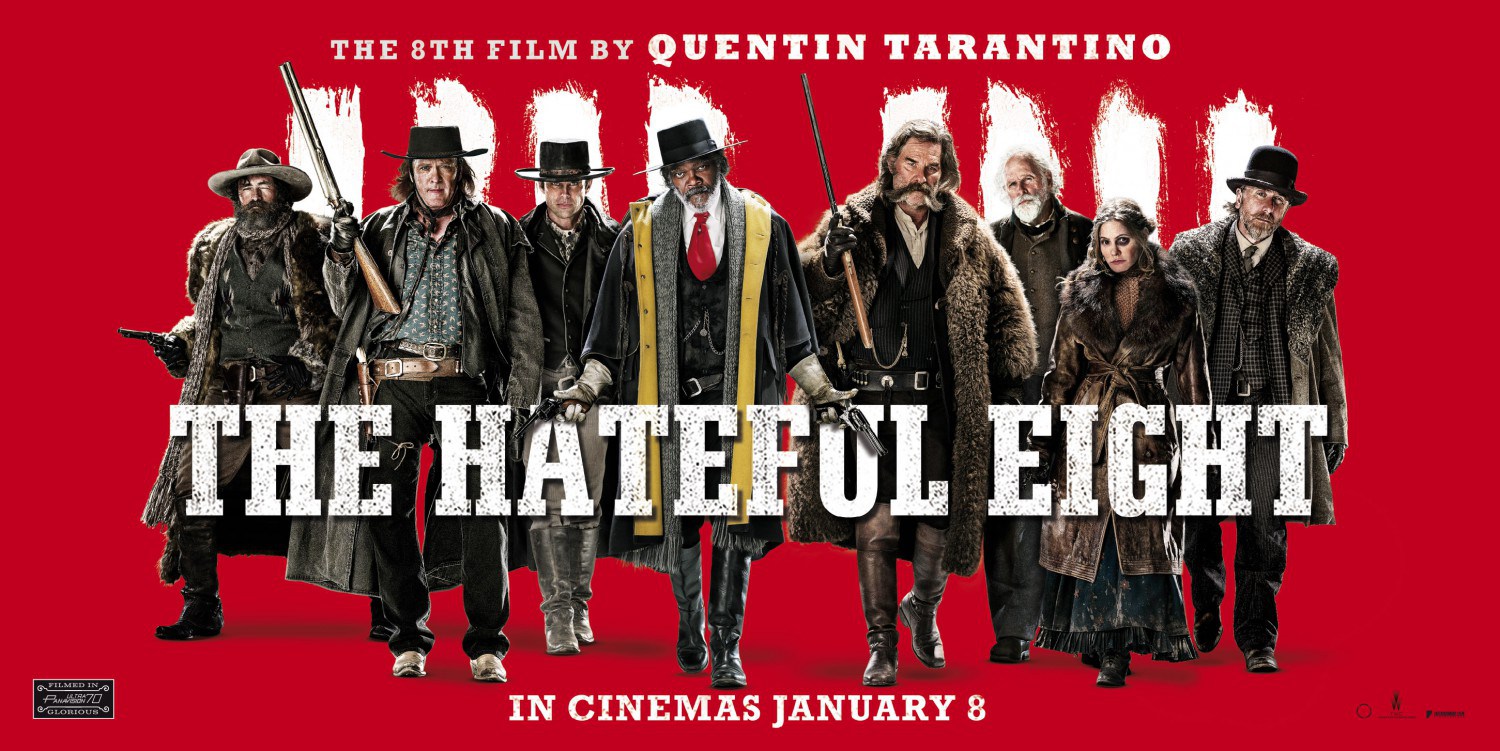 Settling down to sit through Quentin Tarantino’s eight film, The Hateful Eight, I was both excited and a little cautious. Excited because Tarantino has made some of my favourite films yet cautious because The Hateful Eight had a three hour runtime and there was a chance it could become a little self-indulgent.

Tarantino has always been a bit of an acquired taste and he certainly has his critics, particularly of his last few efforts however, with The Hateful Eight, Tarantino has struck gold again. It’s a tense game of Cluedo that, much like any Tarantino film, brings character and dialogue to the fore.

John Ruth (Kurt Russell) is a bounty hunter known as “The Hangman” who, with his prisoner Daisy Domergue (Jennifer Jason Leigh), is on his way to Red Rock to hand her in and watch her hang. With a heavy blizzard on their tail, they pick up two stragglers in Major Marquis Warren (Samuel L. Jackson) and Sheriff Chris Mannix (Walton Goggins), also on their way to Red Rock.

The plan is to make a stop at Minnie’s Haberdashery, a stagecoach lodge, and wait for the blizzard to blow over. What wasn’t on the cards though was Minnie’s being occupied by four strangers; Bob (Demian Bichir), Oswaldo Mobray (Tim Roth), Joe Gage (Michael Madsen) and General Sanford Smithers (Bruce Dern), one of them not being who he says he is.

Being a Tarantino film, you should know to expect long drawn out scenes of dialogue and the occasional explosion of violence. Both are very apparent from the film’s opening scene and from that very moment, Tarantino holds you in a vice like grip and keeps you guessing at who’s who until the final few moments of the film.

It’s the quality of writing again from Tarantino that helps make The Hateful Eight such an engrossing experience. His words and exchanges between the characters are so intricately written that switching off could lead to missing out on something pivotal to the film’s plot. With The Hateful Eight mainly taking place in one location, it has to be spot on and thankfully it is. Much like Tarantino’s first film, Reservoir Dogs, this is a dialogue driven film where each of the backstories will leave you guessing just as much as John Ruth and Marquis Warren.

It’s clear that Tarantino writes his films for certain actors and he is joined by a number of frequent collaborators such as Samuel L Jackson, Tim Roth and Michael Madsen. Every member of the cast brings their own qualities to their respective characters and it makes for such great viewing when they’re all firing each other like this.

I loved pretty much all of the performances but for me the stand-outs were Samuel L. Jackson, Jennifer Jason Leigh and Walton Goggins. Jackson performs the words of Tarantino like no other, Leigh doesn’t have much to say in comparison yet she shines when she does get a word in and uses facial expressions often to comedic effect, and then there is Walton Goggins. Goggins had a bit part in Django Unchained and has been doing the rounds on television for a while but in The Hateful Eight, he gets his moment in the limelight and he sure as hell makes the most of it. I really enjoyed the performance of Channing Tatum too in his small role that I won’t go too much into right now.

I had heard that this was a violent film after its release across the pond on Christmas Day and yes, when it gets violent it really is quite violent however, like both Inglorious Basterds and Django Unchained, it seems more like a cartoon when the violence begins than in his previous films such as Reservoir Dogs and Pulp Fiction. All the proceedings are accompanied by an original score from the legendary Ennio Morricone, his first complete Western score in 40 years.

It may not be to everyone’s taste and I don’t quite know yet where it fits in my ranking of Tarantino films but The Hateful Eight is one hell of a treat in the first week of the new year. Don’t let the runtime put you off as it simply flies by.