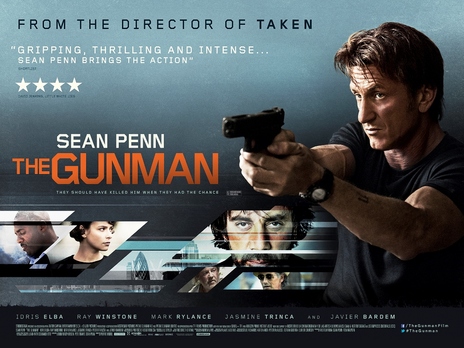 Ask anybody on this planet to write a list of Hollywood actors who they could see as the star of an action movie and I very much doubt that Sean Penn would appear on any of them. It’s fair to say that Penn normally stars in character driven dramas.

With that in mind, I was just as surprised as most people to see Penn as the lead

in The Gunman, the latest in a flurry of action movies to star older actors that started with Liam Neeson in Taken and shows no signs of stopping any time soon.

Penn stars as Jim Terrier, a sniper in a mercenary assassination team who, after successfully killing the minister of mines in Congo, has to leave everything behind and go off the radar.

Eight years later and Jim’s past catches up with him as he is now the target of an organisation looking to terminate those involved in the assassination in Congo. Jim faces a race against time to track this organisation down while also protecting those close to him.

Now, I love action movies but it is clear that over the last decade or so they have taken a drastic nosedive in quality. Too many are just so poorly made nowadays that the golden years of action movies in the 80s and 90s feels a lifetime ago.

but unfortunately it falls a little flat in the end. It isn’t terrible but it isn’t anything spectacular either. The action is both brutal and slick however, the editing is very questionable. It just feels so rushed at times and in places even a little incomprehensible.

Sean Penn gives it a good go in the action department but I just don’t think we will be seeing much of him in this genre again. The rest of the cast including Ray Winstone and Javier Bardem do a competent job in bringing their characters to life, albeit not with an awful lot of help from the writers.

me to the story. The Gunman does centre its story around an interesting idea but rather unfortunately, any interest around the story is lost as the writing is far from inspired. I found myself on the verge of losing total interest and I’m sure I won’t be the only person in the world who feels that way about this movie.

The Gunman is certainly passable as an action movie and definitely watchable but it could have done with better writing in the story and character department. I couldn’t help myself from thinking throughout whether Liam Neeson was offered the role of Jim Terrier before anyone else.