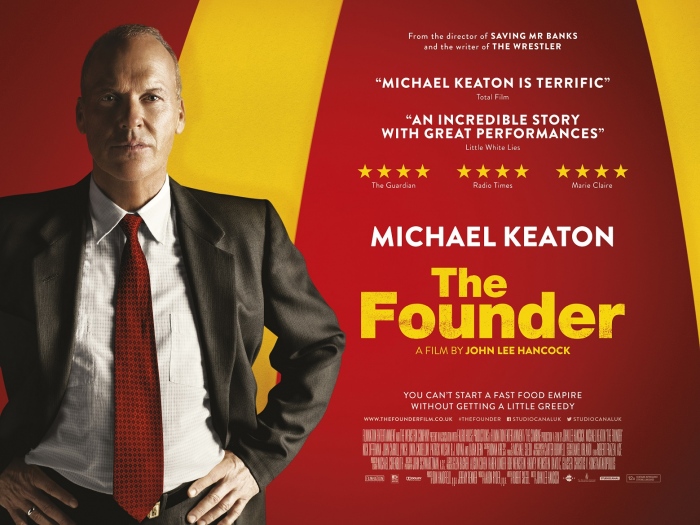 A film about how McDonald’s became the biggest fast food franchise in the world may have had no chance of being made had it not been for the likes of The Social Network and Steve Jobs, both critically successful for differing reasons. That film has now been made and it comes in the form of The Founder.

Ray Kroc (Michael Keaton) made his money as a travelling milkshake maker salesman in 1954 until the day he met Mac and Dick McDonald (John Carroll Lynch and Nick Offerman), tow brothers who own McDonald’s, a single fast food joint that go about their business like no other restaurant Ray has seen before.

Inspired by their meeting, Ray persuades the brothers to franchise McDonald’s and, in doing so, sets in motion a trail of events that lead to McDonald’s becoming the giant corporation we know it as today.

The Founder is a good film but I wouldn’t put it up there with films like The Social Network or Steve Jobs, mainly due to the fact that the writing doesn’t really do a story of this size the justice it deserves. It plays a very safe game with both the story and characters, before bizarrely opting to turn Ray Kroc into a complete and utter prick for the final twenty minutes.

I mean, he’s a really likeable guy at the start but then the total shift in his character for the final twenty minutes felt jarring. The story is a bit too light and fluffy for a story of such high stakes as well, when it should have been a bit more serious in tone. Not saying they should have copied The Social Network but a tone more like that would have worked better.

The shining star of The Founder is undoubtedly Michael Keaton in the lead role of Ray Kroc. Keaton is one of the most underrated actors working today and he really is fantastic in this film. He gets some great support from John Carroll Lynch and Nick Offerman too.

I remember seeing so much buzz about The Founder last year, some even saying it could be up for multiple Academy Awards however, the film has found itself lost amongst much stronger competition. I just wanted it to be better.