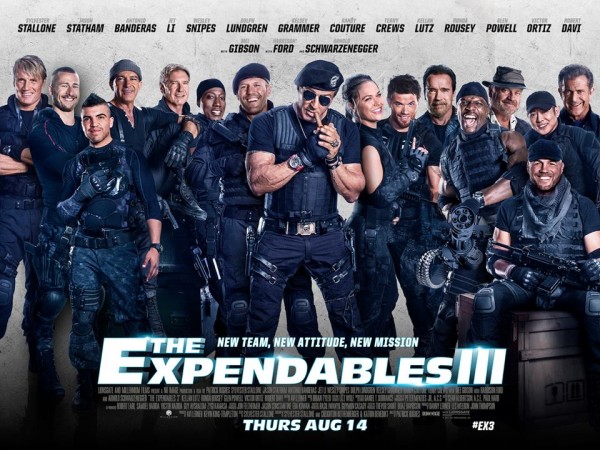 Where do I begin with The Expendables 3?

It would be easy for me to sit here and say that this is a film in The Expendables franchise so no matter how dumb the film is, it is still entertaining to watch. Unfortunately, I have to say this is not the case.

In my opinion this is the worst film of the franchise so far and a strong contender for worst film of 2014, its only saving grace being that I, Frankenstein earlier this year was just god awful.

I love the whole concept behind the franchise; assemble a team of much-loved action heroes and put them in a ridiculously over-the-top action movie that harks back to their glory days of the 80s and 90s.

Each film has seen the cast list grow and this time round we get Wesley Snipes, Kelsey Grammer, Antonio Banderas, Mel Gibson and even Harrison Ford added for, potentially, good measure. Chuck in a bunch of younger faces and you have one hell of a mess but I will get to that later.

During the mission, Ross realises that the arms dealer is Conrad Stonebanks (Mel Gibson), a former member of The Expendables who went rogue and who Ross believes to be dead. With Stonebanks getting the upper hand, Ross disbands The Expendables and puts together a younger team to go after him.

You might think I’m lying but I went to see The Expendables 3 hoping I would have fun. I never go into a film hoping for it to be awful and after the first two films, which I thought were a lot of fun, I was expecting an entertaining ride.

There are many reasons why I thought The Expendables 3 flopped spectacularly and the first of those is that the cast is just too big. The saying “too many cooks spoil the broth” springs to mind in this case and the end result is just one big mess.

Make no mistake, people go to see The Expendables franchise to see the old action stars unite and create carnage. They want to see Arnold Schwarzenegger dispatch a group of bad guys and spout a ridiculous one-liner. They simply don’t care about any of the younger recruits. The fact they were written as such unlikeable characters to start with didn’t help.

Snipes, Grammer, Banderas, Gibson and Ford are welcome additions whereas Kellan Lutz, Ronda Rousey, Glen Powell and Victor Ortiz are not, leading me on to my next point.

The acting is at its lowest standard of the franchise in this film. You would never really associate good acting with any of the cast apart from Gibson, Grammer and Ford but bad acting is taken to new heights in The Expendables 3.

Stallone and Statham are as suspect as ever and it reaches an unbearable point when the two of them have to actually attempt to evoke some emotion from one another. Whoever wrote that into the script should just come out and apologise.

My finger is being well and truly pointed at the new recruits and this comes as no surprise considering they either come from a MMA or boxing background or they have just had barely any acting experience at all. Lutz is so wooden that you could put a wooden spoon next to him and it would look like Daniel Day-Lewis.

I can honestly say that I enjoyed both Kelsey Grammer and Mel Gibson as the villain in this film but then again I couldn’t help but feel Gibson was criminally underused. Some of his scenes just felt totally random and unnecessary until the scene in the van with him and Stallone coming face to face. From that point on, Gibson was a joy to watch, just a shame they made his final fight with Stallone so pathetic.

I cannot talk about performances in this film without mentioning Antonio Banderas as Galgo. He seems to be a marmite character, you will either love him or hate him. I hated him. I thought his character got very irritating, very quickly.

The script and the jokes written for these actors are just utterly atrocious in fact, the script is just one big joke itself. Half of them look embarrassed to even say the jokes and they deserve their fee for this movie alone just because they managed to force themselves to laugh.

There is a point right at the start of the film where Wesley Snipes’ character makes a joke about being in jail for tax evasion, obviously a reference to what Snipes himself was in jail for. The fact that joke was in there and the delivery from Snipes had me thinking, “Did he actually just say that?!”

Once again Schwarzenegger gets to use one of his iconic lines however, watching him lean into shot and shout “Get to the chopper!” with an embarrassing look on his face is just nothing but upsetting.

All of these bad points culminate in an over-the-top finale that sees The Expendables go up against an entire army. The action has always been enjoyable in the franchise but it just became mind-numbingly boring on this occasion. The reason behind that; too many Expendables too little time. There was just too much going on and I quite frankly lost interest within five minutes of it.

Combine that with the grotesque CGI on show and you might actually start to feel nauseous. The scene where Stallone runs across a collapsing rooftop to get to a helicopter just looks awful and nearly made me walk out of the cinema.

I can’t help but think the biggest mistake they made with The Expendables 3 was making it for a 12A audience. That is not who this film’s target audience and it just feels all the way through that they have to hold back where the first two films just let loose. The 12A rating has done nothing but hinder the franchise so please, next time make it a 15 or 18.

There are plans to make an all-female spin-off film called The Expendabelles however, my biggest worry for that is these filmmakers wouldn’t be able to make that without making an incredibly patronising and sexist film.