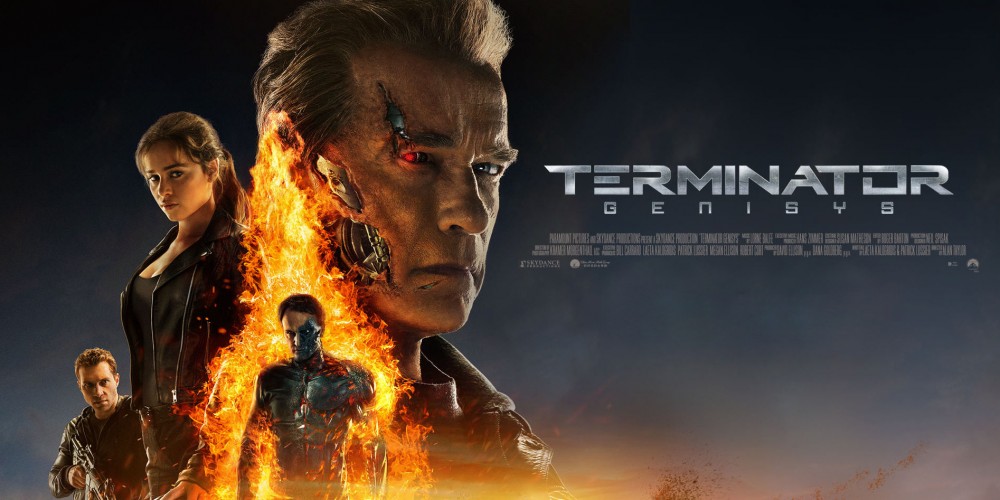 “You’re nothing but a relic from a deleted timeline.”

This was the exact moment I felt like standing up, letting out an angry scream and then walking out of the cinema. I didn’t though and forced myself to stay until the end of Terminator: Genisys, the fifth film in the once popular but now very tired franchise.

Genisys is the first film of the franchise that strays away from the original story by introducing an alternate timeline. The writers may have thought it sounded clever on paper but unfortunately it’s a total mess from start to finish.

In 2029, John Connor (Jason Clarke) sends trusted soldier Kyle Reese (Jai Courtney) back to 1984 Los Angeles in order to protect his mother, Sarah Connor (Emilia Clarke), from a terminator sent back by Skynet to kill her.

When Reese arrives in 1984 though, he finds that things have changed and are not as they’re supposed to be; a T-1000 (Lee Byung-hun) has been sent to intercept him and Sarah Connor is not the clueless damsel in distress. Instead she is aware of everything that is set to happen because she has been raised by a T-800 (Arnold Schwarzenegger), who was sent to protect her from a Skynet attack back in 1973.

The rules change yet again when Sarah and Reese travel forward to 2017 San Francisco to stop the launch of Genisys, an operating system that links every electronic device to one another, making the downfall of humanity an easier task for Skynet. They are joined in 2017 by John, who is now a T-3000 nano-machine hybrid after being attacked by Skynet during Reese’s transportation back to 1984. He has two options for Sarah and Reese; join him and the machines or die.

Now, I’m a huge fan of both The Terminator and Terminator 2: Judgement Day, two excellent sci-fi films that are the clear pinnacles of the franchise. It disappoints me massively then that James Cameron, who directed both of those two, gives Genisys his backing as the true third Terminator film.

Yes, there are iconic moments from both films reimagined, the most entertaining being an Arnold vs Arnold fight, but it doesn’t last very long. That’s what ended up being the film’s major problem; the good moments are rare and do not last very long, at all.

To put it bluntly, the film is just very badly made. Alan Taylor is the director this time round and he finds himself well and truly out of his depth with Genisys. He seems to lack the storytelling ability that made the first two films connect so well with their audience and his film is supported by a moronic screenplay from Laeta Kalogridis and Patrick Lussier.

The alternate timeline that Genisys introduces just feels like such a let down and for me, quite an insult to the legacy of the first two films. I’m all for going in a new direction but not when it is done so shoddily.

Another of the film’s many problems is the big twist that was rather stupidly revealed in the trailer. John Connor being a terminator should have had people gasping in the audience however, when you show that in the trailer, you take away any impact it could have made. I’m not even fully on board with the idea as it was just written so badly but come on guys, leave some things under wraps until we actually see the film.

I can’t really fault the film for its special effects, especially the digitally created Schwarzenegger from 1984, it’s just a shame that the rest of the film is not up to scratch.

I know he is busy with Avatar sequels, but it remains the same since Judgement Day that James Cameron is the only man that can make a good Terminator film.

Then come the performances, which are generally bad all round. Arnold Schwarzenegger has never had great acting ability and he tries his best again here however, due to the terrible script, his once iconic role is treated like a walking joke, spouting lame pun after lame pun while awkwardly discussing Sarah and Reese’s need to mate.

Emilia Clarke, best known as Daenerys Targaryen from Game of Thrones, gives it a good go in the role of Sarah Connor but she is no Linda Hamilton. In fact, once again due to the bad writing, she comes across as more of a parody of the character. Jason Clarke hams it up as John Connor while J. K. Simmons wastes his talent with a minor role that tries to get some cheap laughs.

The worst though has to be Jai Courtney as Kyle Reese. The man just can’t act well at all. He is nowhere near as bad as he was in A Good Day to Die Hard but that is a whole new level of bad. He has no charisma and makes Michael Biehn’s performance in the role look like Daniel Day-Lewis. He best not ruin Suicide Squad for me.

Even the terminators of the film get treated poorly by the writers. These are machines that stalked their targets in such a menacing and eerie manner in the first two films. Now, the    T-1000 is there just to show that he can be shot and carry on while John Connor as the villain feels all too underwhelming.

It seems as if the studio can’t be bargained or reasoned with. They certainly don’t show any remorse and I don’t think they will ever stop, ever, until this franchise is dead in the ground. Sorry Arnie, but this is both old AND obsolete.