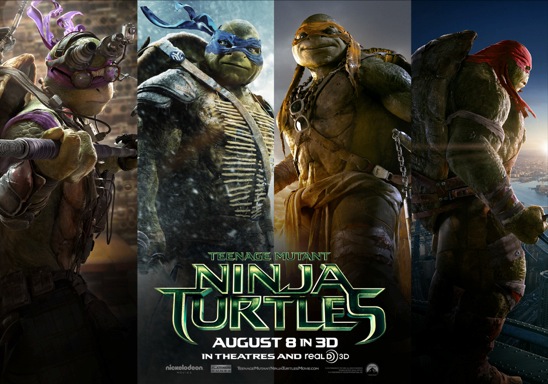 What can I say about Teenage Mutant Ninja Turtles? Well I can start by saying it is better than the utterly abysmal Transformers: Age of Extinction earlier this summer. Not really the biggest of achievements though.

Everyone’s favourite heroes in a half-shell are back and this time they are louder, in just about every way, than ever before. No surprise really when Michael Bay is on board as executive producer.

Reporter April O’Neil (Megan Fox) wants to be taken seriously as a journalist and in doing so, spends most of her time tracking down any Foot Clan activity in New York. The Foot Clan being a gang that have been terrorising the city.

April’s colleagues Vern (Will Arnett) and Bernadette (Whoopi Goldberg) both think she is wasting her time chasing this gang and if she wants to be taken seriously she should be looking elsewhere.

April remembers them from her father’s laboratory experiments with his business partner Eric Sacks (William Fichtner), who is now working with the evil Shredder (Tohoru Masamune).

The Turtles, having been taught the art of ninjutsu by their master Splinter (Danny Woodburn, voiced by Tony Shalhoub), defend the citizens of New York while keeping themselves hidden in the sewers.

If you are still with me then well done.

The biggest problem Teenage Mutant Ninja Turtles has is that it is just so incredibly dumb. Now I know the whole premise itself is ridiculous but there is not one ounce of this film that really shows any intelligence. The script is so poor and full of miscued jokes that it becomes unbelievably irritating to watch at times.

There has been a lot said about the look of the Turtles but I had no issue with that. I did however have a problem with Splinter, wanting to throw up every time he appeared on screen. A man-sized rat would not look pretty but why make him look SO grotesque.

The humans don’t fare much better to be honest. Megan Fox and Will Arnett are not really given much to do apart from make the script sound passable, just about managing at times.

The only thing to save Teenage Mutant Ninja Turtles from being a complete disaster is its action set-pieces. Director Jonathan Liebesman shows he knows how to deliver big and fun action with each set-piece so fast paced it adds to the fun.

One in particular featuring the Turtles escaping the Foot Clan down a mountain mid-avalanche is so much fun and might just be one of the better action set-pieces of the year.

Michael Bay’s involvement is clear for all to see however it is not enough of an involvement to destroy all fond memories of Teenage Mutant Ninja Turtles you have ever had. If only the same can be said for Transformers.