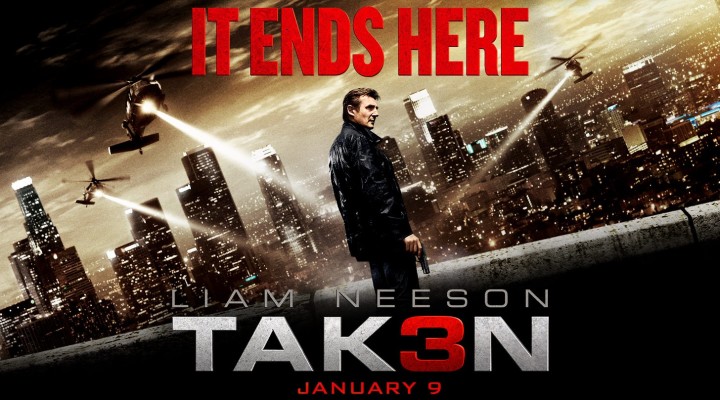 Back in 2008, Taken blasted on to our screens and gave us an unlikely action hero in Liam Neeson. It was a solid action film that I liked but it was by no means the great film that some claimed it to be.

Fast forward to present day and Taken 3 is now in cinemas but with quite a whimper compared to the first film seven years ago.

Bryan Mills (Liam Neeson) is back and this time he must go on the run from the police after being framed for the murder of his ex-wife, Lenore (Famke Janssen). With Inspector Franck Dotzler (Forest Whitaker) hot on his trail, Mills faces a run against time to clear his name and protect his daughter Kim (Maggie Grace) from the men responsible for Lenore’s death.

Taken 3 is not a very good film and there are plenty of reasons as to why. One of the most obvious being that the film is just utterly pointless. No one asked for it and the film just serves as a reminder that a studio will try and squeeze as much money out of a franchise, no matter how tired it is.

Even Liam Neeson was reluctant to return for a third film for crying out loud!

The performances in Taken 3 leave a lot to be desired but for the most part they remain watchable. The same cannot be said however for the script, written by Luc Besson and Robert Mark Kamen. It is just so laughable that I found myself laughing more than I would do in some comedies.

All of what I have said so far plays a part in making Taken 3 a bad film but by far the worst thing about the film is how shockingly bad it is edited. The action is just so incomprehensible and that is not a good thing considering the action is the main reason to watch one of the Taken films.

The action is, as always, over the top however, there is nothing as ridiculous as Mills instructing his daughter to throw live grenades around a populated Istanbul so that automatically makes this better than Taken 2.

“It ends here” is the tagline for Taken 3 and I really do hope it is the end because, let’s be honest, there should have only ever been one Taken film.