Having breathed new life into the Star Wars franchise with The Force Awakens back in 2015, a film that was an adrenaline rush of nostalgia combined with fresh new characters, Star Wars was well and truly back, and bigger than ever before. Opting to close the film with such a teasing cliffhanger of a final shot left the world waiting with baited breath for the continuation of the saga and with Star Wars: The Last Jedi, the wait is finally over.

As the Resistance prepares to continue the fight against the First Order, Rey (Daisy Ridley), having only just taken her first steps into the Jedi world, trains with Luke Skywalker (Mark Hamill) in the ways of the Force, leading to secrets of the past being unearthed. 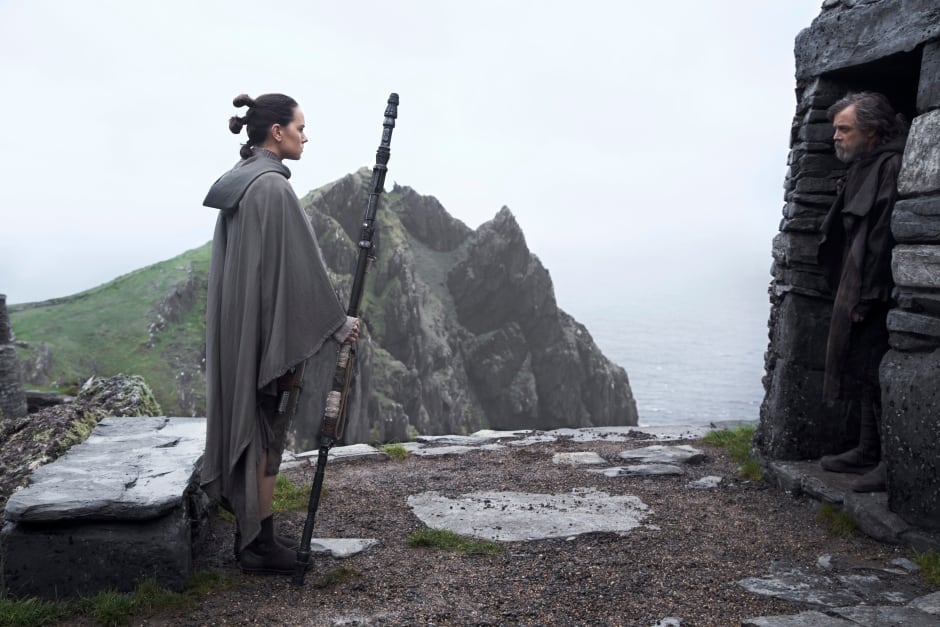 As soon as the goosebump inducing moment of Star Wars filling the screen with John Williams’ iconic score blaring out had passed, it was clear that this was going to be a very different Star Wars film from what had come before. The potential for this film was so high however, as it drew on, I couldn’t help but feel that it’s let down by an inconsistent tone that became very jarring.

Rian Johnson has very much created a Star Wars film from his own vision, writing and directing probably the most unpredictable instalment of the saga yet. I admire Johnson for taking some risks but the film feels so far away from The Force Awakens that they almost don’t feel connected at all. After the way we were introduced to new characters and storylines in the previous instalment, this continuation doesn’t seem to live up to that standard.

Don’t get me wrong, The Last Jedi features some great Star Wars moments and Johnson has taken some of the character arcs in a very interesting direction, which makes the wait for Episode IX even more tantalising. While Star Wars films do tend to feature an element of comedy, The Last Jedi almost overuses the humour, particularly in moments it shouldn’t, which leads to the aforementioned inconsistent tone that hampers the film. I didn’t really think the Porgs were necessary at all but hey, whatever sells merchandise I guess right?

As I’ve already said, The Last Jedi has some great crowd-pleasing moments, Johnson understanding what the audience wants to see for the most part, an incredibly tense showdown between a trio of characters in the middle act being one of the film’s standout moments. He does opt to include some very bizarre moments mind, one of the weirdest Star Wars moments coming in the first act and a plot device that left me feeling cheated coming in the final act.

As with the majority of the Star Wars films, there are some incredible visual effects on show in The Last Jedi, the dogfights in space being utterly exhilarating yet again while watching Rey and Kylo Ren wield their lightsabers in battle is made even better by the fight choreography that’s executed to perfection. The Last Jedi also boasts yet another John Williams score that accompanies the action and characters tremendously well.

Coming to the performances, The Last Jedi features an ensemble of performers who make the characters such a major success, a common trait throughout the Star Wars saga. The trio that really stood out for me though were Daisy Ridley as Rey, Adam Driver as Kylo Ren and Mark Hamill as Luke Skywalker. Ridley and Driver have taken to being in such a major and important franchise like ducks to water, Ridley in particular, and the two of them share some memorable scenes together in The Last Jedi. Seeing Mark Hamill in the role of Luke Skywalker again was such a joy and he gives it his all here, the pain and anguish of his failures in the past coming to the fore through Hamill’s performance. While I don’t agree with everything Johnson did with these characters, I thought all three gave memorable performances.

Carrie Fisher gets a much more prominent role in The Last Jedi, the regal presence of Leia being a most welcome one. I didn’t really take to Kelly Marie Tran’s Rose Tico mainly because her character just feels too forced into the narrative. John Boyega, who was such a major player in The Force Awakens feels as if he’s sidelined here, as does Oscar Isaac, again. It’s disappointing to see these two play in the shadows so much.

A little muddled as an entry into the Star Wars saga, The Last Jedi is certainly an enjoyable cinematic experience, it just doesn’t hit the heights already reached in the saga previously. A number of questions remain unanswered so J. J. Abrams has a lot of work in tying up loose ends to close the trilogy with Episode IX. Even though I walked out of The Last Jedi a little disappointed, I cannot wait for the final instalment.