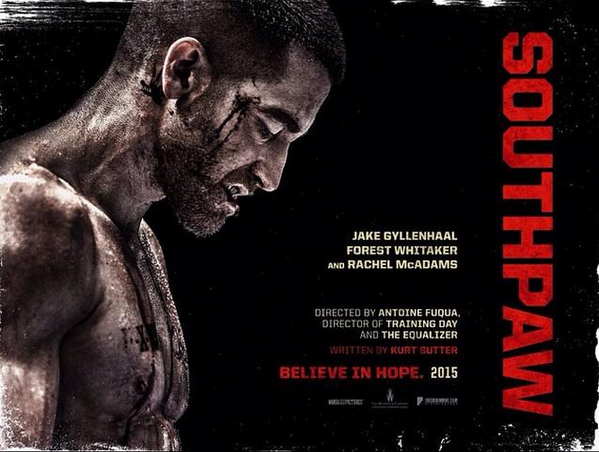 As with most sports dramas, Southpaw is a film more about the man than the sport. Labelled by many as the ‘modern day Raging Bull‘, I had high hopes for Southpaw and thanks to Jake Gyllenhaal, it duly delivered. This is a tale of one man’s path to redemption through boxing.

Billy Hope (Jake Gyllenhaal) is the Light Heavyweight champion of the world and a boxer known for his unique style and impressive fight record. When his wife, Maureen (Rachel McAdams), is shot dead following a scuffle with title contender Miguel Escobar (Miguel Gomez), both Billy’s career and personal life go in a downward spiral that sees him both lose his boxing licence and his daughter, Leila (Oona Laurence), to child protection services.

Billy turns to trainer Tick Wills (Forest Whitaker) to help him get his life back on track. Carry on down the same path and Billy could lose his daughter forever however, putting his focus into a return to boxing could see Billy regain everything he lost after the death of his wife.

As mentioned before, the film focuses more on the man than the sport however, Southpaw is one of the only boxing dramas I have seen where the sport of boxing actually feels like a character in the film, not just a backdrop for the drama.

Southpaw does become a bit predictable and features quite a few cliches, which can’t be helped in this genre, but director Antoine Fuqua does a good job in making sure Southpaw has a bit of a cutting edge to it. This is a hard hitting drama that isn’t scared to throw the hardest of punches at its audience.

After leaving the cinema, I read that Eminem had been lined up for the role of Billy Hope when the film first came into production. How different a film that would have been. I could not be more thankful that the studio decided not to follow through with that and instead decided to cast Gyllenhaal in the role instead.

Gyllenhaal is an actor who makes it clear that he takes his roles very seriously and you can see that from the transformation he has put his body through, becoming almost unrecognisable from the skinny Lou Bloom in Nightcrawler. His gruelling six month training regime certainly makes him look like a boxer but his decision to learn the boxing techniques means he moves like a boxer too, making the performance even more authentic.

The transformation would mean absolutely nothing without the performance to match though. As expected, Gyllenhaal gives an absolute powerhouse of a performance in Southpaw that really raises the quality of the film because without him, this would be quite an average film. I struggle to think of an actor right now on a hotter streak in Hollywood than Gyllenhaal.

Forest Whitaker, as usual, adds a quality to proceedings and Rachel McAdams does a fine job in her small role, which would have been better if we hadn’t seen her characters outcome in the trailers. Oona Laurence gives an impressive performance as the young Leila and I didn’t even mind 50 Cent or Rita Ora being cast in the film.

The boxing sequences are very good as well, with the use of POV shots in particular injecting the sequences with adrenaline and making the audience feel every single punch thrown.

While Southpaw isn’t the masterpiece that Raging Bull is, it certainly sees Fuqua make his best film since Training Day. Led by another top performance from Gyllenhaal, maybe Southpaw will make the voters this awards season stand up and take notice of his talent, not ignore it like they did with Nightcrawler.