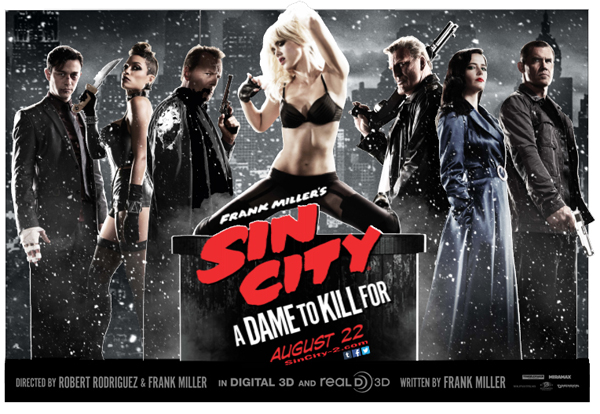 Nine years have passed since Sin City graced cinema screens around the world. Wowing audiences with its stunning visuals that harked back to classic film noir of the 40s and 50s, Sin City also managed to be one of the most faithful adaptations of a comic-book or graphic novel ever made.

Fans of the novels would say what they were seeing on the screen would be as if they were flicking through the pages of the novel at home. With that in mind, the long awaited sequel, Sin City: A Dame to Kill For had a hell of an example to live up to.

A Dame to Kill For features four stories written by Frank Miller with “A Dame to Kill For” the most prominent (obviously). The other stories used are “Just Another Saturday Night” and two written specifically for the film by Miller; “The Long Bad Night” and “Nancy’s Last Dance”.

“Just Another Saturday Night” kicks the film off and it delivers what everyone has been eagerly anticipating for nine years; a reintroduction to the brutality of fan-favourite Marv (Mickey Rourke), seen dealing with a group of frat boys, and the glorious visuals that let you know you are back in Sin City.

The two stories written for the film, “The Long Bad Night” and “Nancy’s Last Dance” share a common plot line, revenge against Senator Roarke (Powers Boothe). The former finds Johnny (Joseph Gordon-Levitt), a gambler, go up against Roarke in a high-stakes poker game, whereas the latter sees Nancy (Jessica Alba) seek revenge for the death of John Hartigan (Bruce Willis), the only man she ever loved.

“A Dame to Kill For” being the prominent story means it gets the most screen time. This is the story of Dwight (Josh Brolin), years before “The Big Fat Kill” in Sin City (hence why he is not played by Clive Owen this time out), and his battle to keep his inner monster under control. Not an easy task when femme fatale Ava (Eva Green) comes back into his life.

Ava is a woman shrouded in mystery and it is not too long before we find out why exactly she is the subject of the film’s title.

One of the reasons for this is the fact it just feels like a complete mess when it comes to its storytelling. Like the original there are four stories featured in this film however, unlike the original, the majority of the film is taken up by the one storyline.

Sin City took three of the novels and split the running time equally between them, meaning you got time to feel connected to both the plot and its characters. The trouble that A Dame to Kill For has is that it spends so much time on the Dwight story that when it comes to both the Johnny and Nancy stories, everything just feels rushed and really really cheap.

This frustrated me as there was chance to connect with the Johnny and Nancy stories and it left me kind of hating the Dwight story, just because it hindered the rest of the film. Compare that to the first film, where each story was done justice to, and A Dame to Kill For is in big trouble already.

Sin City had an unbelievable ensemble cast but I’m pretty sure it is outdone by this sequel, with some exceptional talent brought in. Josh Brolin, Joseph Gordon-Levitt and Eva Green are all welcome additions to the likes of Mickey Rourke, Bruce Willis, Rosario Dawson and Jessica Alba however, they are let down by the mess that directors Robert Rodriguez and Frank Miller created with their storytelling.

Brolin is the best of the bunch in A Dame to Kill For, playing Dwight with just the right balance between desire and anger. Gordon-Levitt to me just seems too squeaky clean a guy to sell a character living in Sin City but he manages to achieve this, even if his character and story feels pushed to the side.

Then you have Eva Green playing the femme fatale of the film. Green is a good actress however, in A Dame to Kill For I just felt that Rodriguez and Miller didn’t use her right. They just seemed too interested in having her nude that her character ended up becoming just laughable.

We get it, sex sells but there are classier ways of selling it.

The visual style, black and white with the odd splash of colour, was used to great effect in Sin City and it serves A Dame to Kill For well, up until a certain point. There came a point where I just felt colour was being overused and unnecessary, ruining the effect it had on the first film, which used it far less.

It felt like Rodriguez and Miller were just showing off their toys and cheapened the overall effect, much like they did with the gratuitous nudity of Eva Green.

In the same way Kick-Ass 2 suffered last summer, some people will think the bubble has burst and the novelty factor has worn off. I don’t think this is the case though. I just think they went way too overboard with the style that it felt like a gimmick and they did a poor job with the story lines meaning Sin City: A Dame to Kill For ends up being nothing but a big fat disappointment.