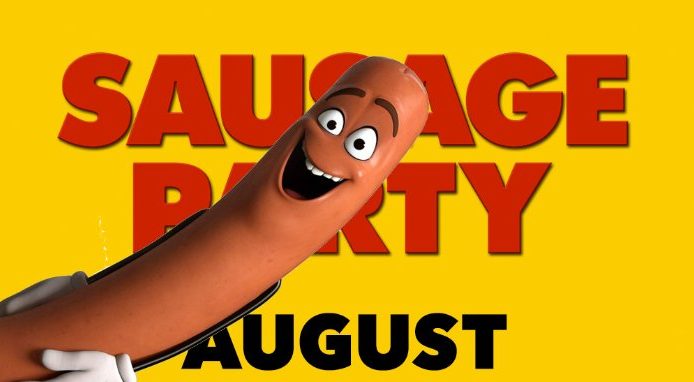 A few years ago, Seth Rogen shared a video on social media of himself plus fellow cast and crew members of Sausage Party watching rough footage of a particular sequence in the film that left them all howling with laughter, as well as some of them covering their eyes as a result of the vulgarity they were witnessing.

Most animated films are aimed at children with elements that adults will appreciate as well. Sausage Party is an animated comedy from the minds of Seth Rogen, Evan Goldberg and Jonah Hill that is 100% aimed at strictly adults only. To anyone who saw that video posted by Seth Rogen and has seen Sausage Party, it should be clear as day what sequence it is they’re watching in that video.

Sausage Party focuses on the food in a supermarket and their desire to be chosen by the human gods to be taken to “the great beyond”, a supposed heaven for food where they’ll be looked after by the humans.

When Frank (Seth Rogen), a sausage, and Brenda (Kristen Wiig), a hot dog bun, fall out of the trolley on their way to the great beyond, they uncover the horrible truth that really happens when all food leaves the supermarket. With this truth in mind, Frank and Brenda go about warning the rest of the food and rally them to fight back against the gods.

While the plot may sound utterly bonkers, I can assure you that Sausage Party is actually a very cleverly made animated comedy. Think South Park made an episode where the boys imagined they were food and this is the sort of thing you’d get. I’m sure I won’t be the only person to say that I’ve never seen anything quite like this before.

What could have easily just been a sex comedy about a sausage getting inside a bun, and there are enough innuendos regarding this, becomes so much more when both religious and racial stereotypes are targeted and, as the plot starts to unravel, it becomes clear that this film is trying to deliver a message about religion.

While it gets a bit lost trying to deliver this message, Sausage Party plays out in such an admirable and downright hilarious manner. The choice to revolve the story around food allows for a vast array of characters, some of which will no doubt cause controversy, including a warring bagel named Sammy Bagel Jr. and lavash called Kareem Abdul Lavash, proving that Rogen and friends are not afraid to poke fun at religious beliefs.

There’s racial stereotypes galore and even a musical number that includes Nazi sauerkraut singing about “Exterminating the juice!”. Not every character is a racial or religious stereotype mind, there’s a villain called Douche who “juices up” to get stronger, a clear mockery of steroid abusers.

I loved the voice work in Sausage Party as well, every actor suiting their character down to a tee. The best has to be Edward Norton as Sammy Bagel Jr., who I knew was in the film but I had no idea that was him until the final scene. Nick Kroll as Douche definitely deserves a mention too as he has some great moments.

Sausage Party is easily one of the year’s best comedies and a gargantuan feast of laughs that will have you looking at food quite differently now. I’m pretty sure I may never be able to eat a hot dog again.