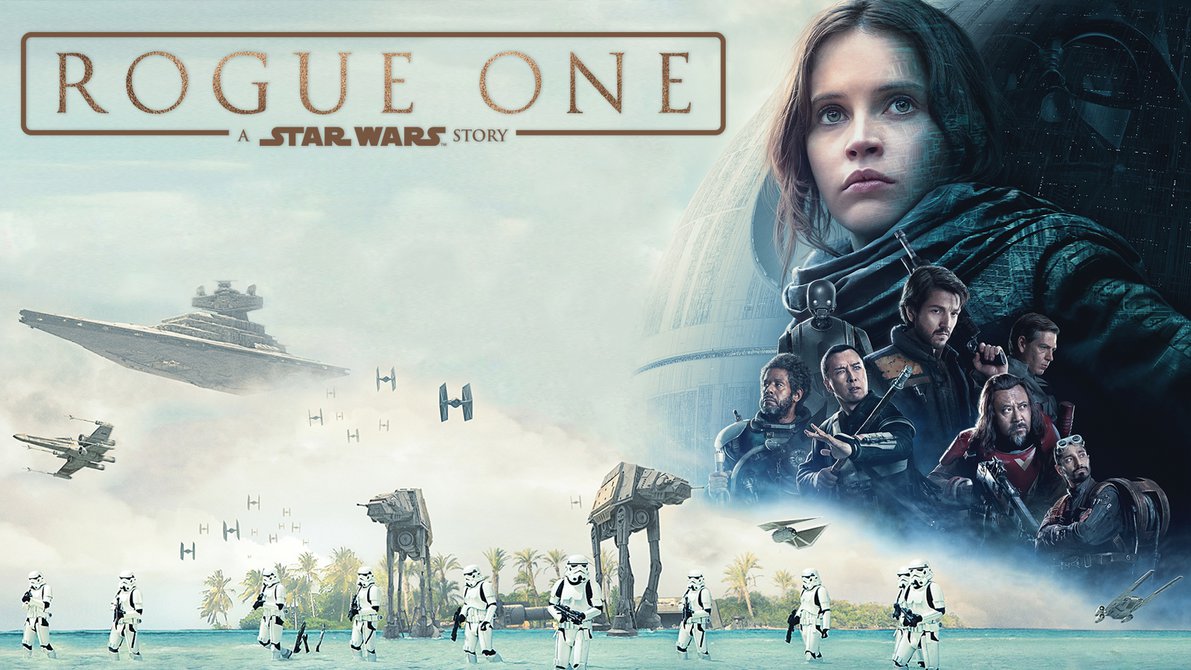 Bold and brave, just like the set of characters the film follows, Rogue One: A Star Wars Story is a Star Wars film but not as we know it. Set just before 1977’s A New Hope, this doesn’t continue the saga, instead going back to show a pivotal moment in the Rebel Alliance’s fight against the Empire.

Jyn Erso (Felicity Jones) is a criminal and daughter of Galen Erso (Mads Mikkelsen), a weapons designer forced by the Empire to complete their super-weapon, the Death Star, a weapon rumoured to be capable of destroying entire planets in one strike.

With the Empire having such a powerful weapon at their disposal, the Rebel Alliance recruits Jyn to work with a team, led by Cassian Andor (Diego Luna), to infiltrate the enemy and steal the design schematics for the Death Star, to aid them in taking down the Empire.

Yes, this is a Star Wars film but that doesn’t stop it from being a massive risk. Rogue One has the challenge of being set so close to the fantastic original however, Gareth Edwards does a great job in delivering a film that pays homage to events in the original trilogy while stamping its own fingerprint on the franchise.

This is a war film within the Star Wars franchise and Edwards certainly makes it certainly look and feel like one. The production design is full of dirt and grit, totally missing from the prequel trilogy, and there is some quite wonderful cinematography from Greig Fraser, honing in on the close proximity of war all while still managing to make this feel like a Star Wars film. Like The Force Awakens last year, Rogue One possesses some magnificent shots that I won’t be forgetting anytime soon.

The combination of both of these with the special effects certainly make Rogue One such a visual treat. There were two uses of CGI that I absolutely hated and they really did distract me from what was happening in the film, one character getting a lot more screen time than I thought they should have had and the other almost looking as if no work had gone into their appearance.

The writing in Rogue One, in terms of story, allows the film to move at such a brisk pace, leading to an enjoyable experience at the cinema. There are plenty of references to other Star Wars films and it all concludes with a final act that you just have to sit back and applaud. If you have trouble seeing Rogue One as a Star Wars film, this final act will persuade you to change your mind.

I found the the characters to be the one thing that really held this film back from being a great Star Wars film. Jyn is just about the only one who gets any element of character development, meaning it’s tough to really root for them all. There is a severe lack of characters for people to fall in love with, unlike the best of the Star Wars films. There is one returning character in Darth Vader, who I was particularly excited to see on the big screen again, and believe me when I say, there is a Vader moment that will make you lose your shit. It’s just amazing.

Coming to the performances, Rogue One definitely possesses one of the greatest casts ever assembled for a Star Wars film. Felicity Jones truly brings a lot of steel to her good performances as Jyn Erso, Alan Tudyk steals a lot of scenes with his often comedic performance as K-2SO, a reprogrammed Imperial droid, and Donnie Yen finally gets his chance to shine in a major American blockbuster, taking it with plenty of style too as Chirrut Imwe, a blind warrior. It’s great to see both Ben Mendelsohn and Mads Mikkelsen not get wasted in such minor roles as well.

The other disappointing aspect of Rogue One is it’s score, this time composed by Michael Giacchino. John Williams’ scores bring a certain kind of magic to the Star Wars films but I just didn’t feel that same sense of magic with Giacchino’s score here. Disappointing for me when I know Giacchino is such a capable composer.

As a whole, Rogue One is a risk well worth taking for the Star Wars franchise, opting to attempt and deliver a distinctly separate film from the rest of the franchise. It has a few issues holding it back from being great but I will certainly be heading back for repeat viewings.