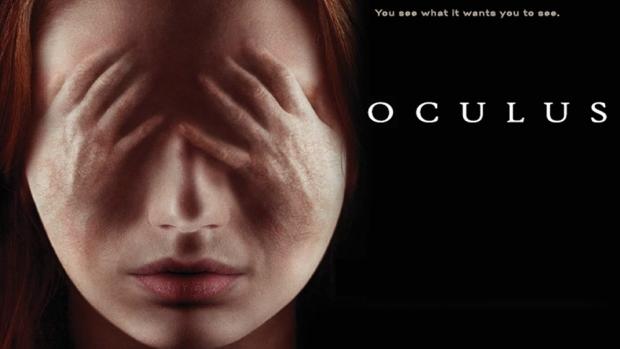 Like most film genres, horror has evolved over the years. The only problem is that much like the comedy and action genres, horror films all seem to be too similar these days. There is too much rubbish being churned out by studios and not enough care being taken in the films they produce. Oculus is an exception in the horror genre.

Karen Gillan plays Kaylie, a woman trying to prove that a supernaturally possessed mirror is responsible for the death of her parents, not her brother Tim (Brenton Thwaites). Upon his release from a psychiatric hospital, Kaylie persuades Tim to help her confront the mirror and destroy it once and for all.

Placing the mirror in its original location at their old house, Kaylie rigs the room with video cameras to capture evidence of the possessed mirror at work and an anchor on the ceiling, set on a timer to swing down every hour and destroy the mirror.

The present day story of Kaylie and Tim facing the mirror is intertwined with flashbacks to 11 years before, when Kaylie and Tim saw first-hand the supernatural power of the mirror. While watching Oculus, remember to keep the tagline in your mind at all times; “You see what it wants you to see”.

What makes Oculus different to recent horror films then? Firstly, the use of flashbacks and deciding to have them intertwine with the present day was executed pretty well. It could have become quite a mess but director Mike Flanagan, also on writing duties, made sure the audience would not end up scratching their heads.

Oculus managed to avoid the two things I hate about modern day horrors. It didn’t descend into complete and utter silliness like Insidious and The Conjuring did, which is surprising considering the producer behind Insidious was involved here.

Oculus also achieved being genuinely disturbing and creepy without the use of loud noises. I have lost count at the amount of times I have jumped in horror films more recently because of the use of loud sounds or music rather than the visuals. Naturally, after watching Oculus, it may take you a while to comfortably stand in front of a mirror again.

What impressed me the most about Oculus were its central performances. Gillan, best known for playing Amy Pond in Doctor Who, was good as Kaylie. It was refreshing to see a female character tackling the problem head on, rather than cowering in the corner.

Thwaites also gave a good performance and if you had read my review of his performance in Maleficent a few weeks ago, you will know how surprised that would have made me. There was no sighing at his arrival on screen this time.

One thing I thought I would never be saying is how impressed I was with the child actors in this film. Annalise Basso plays the young Kaylie and Garrett Ryan plays the young Tim, both giving convincing performances but Basso in particular maybe showing signs of a bright future in the industry.

Rory Cochrane and Katee Sackhoff also put in good work as the parents of the family but ultimately find themselves being outshone by the child actors.

Oculus doesn’t break any boundaries as a horror film and its ending is a little bit cliched and predictable which stops it being a great film. However, breaking away from the current trend of found-footage horror films and trying to provide audiences with a different experience is something that should be commended.