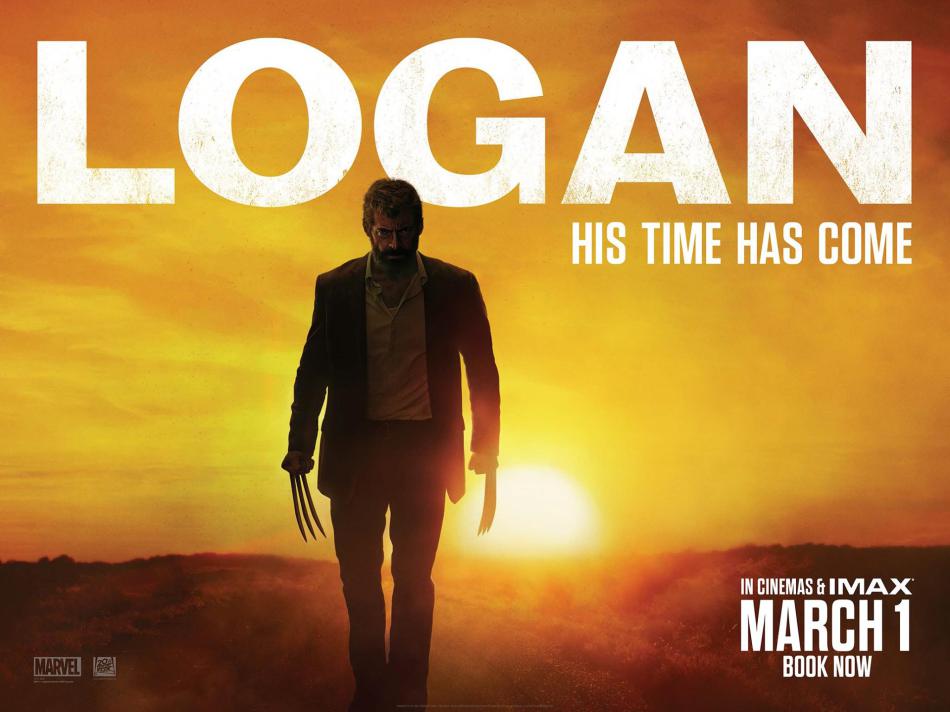 Seventeen years and eight films after he first donned the iconic mutton chops and sharpened those adamantium claws, Hugh Jackman is back one last time in his most iconic role of Wolverine in Logan. With the ominous tagline ‘His time has come’ looming over the film, my hopes were that they’d be able to do both the character and Jackman justice after the two solo outings we’ve had so far have left a lot to be desired.

The year is 2029 and there hasn’t been a mutant born for twenty-five years. Attempting to hide from his life and legacy, Logan (Hugh Jackman) lives on the Mexican border providing care for an ailing Professor X (Patrick Stewart).

With his powers dwindling, Logan is approached to help with Laura (Dafne Keen), a young mutant being pursued by dark forces. bringing everything he tried to put in the past right back to the fore.

First thing that struck me about Logan was just how different a take on the character this was going to be. Sure, he’s always had anger issues but we have never seen him in this state before, constant pain and deteriorating powers making him a shadow of his former self. Right from the off we are thrown into a scenario that perfectly sets the tone for the film about to unfold, it’s subtly comical yet brutally violent, making me so glad we finally have an R rated Wolverine film.

The violence isn’t unnecessary either, supporting a more realistic portrayal of Logan taking down his enemies. It also helps the action sequences flow better, rather than having to cut away every time someone gets stabbed in the head the camera can linger a little longer on the mess Logan and X-23 leave in their wake, one long take in particular towards the end gloriously showing Wolverine at his devastating best. It’s at this moment that I have to thank the success of Deadpool, which led to the studio giving James Mangold the chance to do an untamed version of this character, Mangold in full control of the reins mirroring Logan fulfilling his brutal potential.

The difference in quality between The Wolverine, which Mangold also directed, and Logan is quite staggering really and you can certainly tell Mangold was in full control of the story this time round. The former descended into a typically over-the-top CGI-fest of a finale whereas Logan takes its time to build a study of this beaten down hero before climaxing with a heartfelt and personal finale that makes it much more of an involving film for the audience. The theme of parenthood has been explored a little with this character before, his relationship with Rogue in the first two X-Men films however, none of them have been quite like this, Mangold’s homage to the old school Westerns playing out fascinatingly well as Logan plays out. The real dirt and grit of a Western etched with Logan’s past is felt through John Mathieson’s quite wonderful cinematography while the adventure of it all is encapsulated in Marco Beltrami’s score.

Coming to the performances, Logan features the best turn from Hugh Jackman in the role to date, and you can tell with his performance and promotion of the film that this is something he’s always wanted to do with the character. Jackman’s dedication to the role is admirable and I don’t think he’s ever done a bad job in any of the films, it’s just that when a performance like this comes along in a film of this quality, it’s hard not to put it above the rest. Patrick Stewart returns as Professor X, himself not in the best of places, and it’s a very good and touching performance from a man who’s also done a lot in making the X-Men films what they are. I found I had to get used to the pair of them swearing so much but when I did, the two are really quite funny, particularly together.

The breakout performance from Dafne Keen as Laura/X-23 is one of the most impressive ones we will see all year, offering an innocent yet vicious portrayal of such a powerful little girl. She speaks very few words, using her facial expressions more to convey her emotions and she rather impressively gives Jackman a run for his money when it comes to the action sequences. The rest of the supporting cast, most notably Boyd Holbrook as Donald Pierce and Stephen Merchant as Caliban, make the most of their screen time, even if Holbrook does fall foul to the comic-book movie villain curse. This is Jackman’s film though so focusing more on his last outing was always going to happen.

Logan certainly does justice to both the character and Hugh Jackman himself with a film that steps away from the superhero norm and offers a personal and emotionally fuelled outing that certainly brings the violence and delivers one of the best comic-book films I’ve seen.