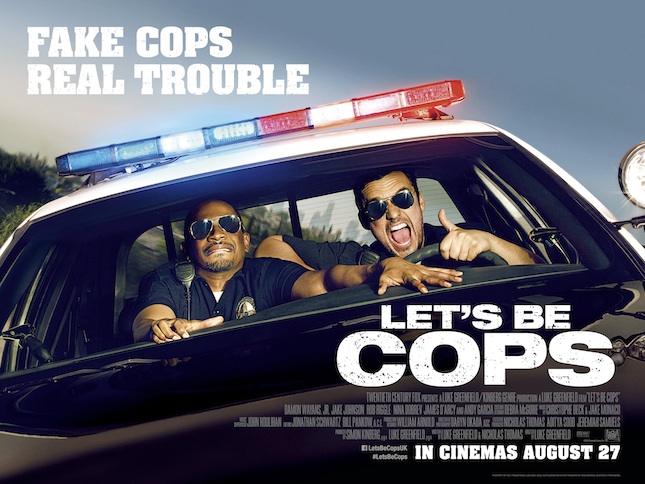 I don’t go to the cinema to dislike a film, I really don’t. No matter what a film looks like from any trailers or posters, I always go in with an open mind because I know from previous experiences; even a film that looks awful from its marketing can turn out to be surprisingly good.

Let’s Be Cops however, is a film that I was actually really looking forward to so I found it quite a shame when it ended up being pretty rubbish.

Let’s Be Cops stars Jake Johnson and Damon Wayans Jr. (both of New Girl fame) as Ryan and Justin, two best friends both struggling to get anywhere in life. When Justin’s game presentation doesn’t go to plan he returns home with full cop gear in tow.

It isn’t long before the two head off to a party dressed as cops and pretty soon the two are recognised as real cops patrolling the streets, prompting them to have some fun of their own.

For a film with such a ridiculous concept, Let’s Be Cops ends up getting too far-fetched for its own good. Ryan and Justin go from having a laugh and trying to get laid to tackling notorious Russian mobsters as you’d expect John McClane to in a Die Hard film.

I just think they could have done with keeping it a bit more grounded instead of trying their hardest to go over the top. A lot of jokes just do not hit the target.

Let’s Be Cops has a much more pressing issue at its core though. For a comedy with a 100-minute runtime, Let’s Be Cops is severely lacking in energy that by the end, makes you feel as if you have been sat in the cinema for four hours. Earlier this year, 22 Jump Street showed the energy that is needed to keep an audience entertained and is a far superior film to this. Even Ride Along, as bad as it was, had some sort of energy to it.

I enjoyed both the lead performances from Jake Johnson and Damon Wayans Jr. enough, even if they did both come across as total douchebags at various points throughout the film. For me though, Johnson has more of a future as a lead in future comedies.

If you’re looking for a bit of harmless fun then Let’s Be Cops might be for you however, go into this expecting anything resembling both 21 Jump Street and 22 Jump Street, there will only be one outcome; disappointment.