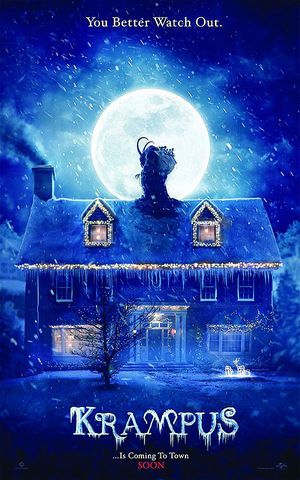 Every year around this time we get a few new releases that are centred around the Christmas holidays. It’s no surprise really as Christmas is one of the most profitable times of the year however, the trouble is that most of these films normally follow the same formula and end up being rather quite boring.

There are films however, that stray away from the norm and Krampus is certainly one of those. Yes, it involves a dysfunctional family coming together for Christmas but with an Alpine folklore twist thrown in for good measure, it certainly makes things a little bit more interesting.

Tom (Adam Scott) and Sarah (Toni Collette) are parents in a family hosting Christmas for their relatives. When Sarah’s sister, Linda (Allison Tolman) and her husband Howard (David Koechner), arrive for the holiday, it is clear that they don’t always see eye to eye.

Tempers begin to flare and when Max (Emjay Anthony), Tom and Sarah’s son, makes a Christmas wish, all hell breaks loose as Krampus, an ancient spirit that punishes those who lose the true meaning of Christmas, pays them all a visit.

What I loved most about Krampus is just how much it reminded me of Gremlins, with its dark comedy burying the tongue firmly in the cheek. Gremlins is one of my favourite Christmas films mainly because it goes against everything you would expect to see in one with fear taking the place of festive cheer.

Krampus isn’t just a copy of Gremlins though. It gets its own identity thanks to the folklore that it incorporates into the story. Michael Dougherty, Todd Casey and Zach Shields have done a great job in their writing by mixing the fantasy elements with the comedy, making Krampus a very likeable piece of entertainment this holiday season.

Dougherty, also the director, has spoken of his commitment to using practical effects and it’s a decision that should really be applauded. They go a long way in making the horror elements of the film so effective, with the creatures looking way more realistic and disturbing than CGI ever could. I mean you just have to look at the jack-in-the-box in comparison to the  gingerbread men and you will agree.

Some of the jokes fail to land in the film but comedy actors such as Adam Scott and David Koechner play their part in making the most of all the jokes. There isn’t one performance that hinders the film in any way, even when there are just as many child actors on show, and I have a real dislike towards child actors sometimes.

So, rather than digging out Home Alone or any other Christmas film you normally watch again this year, give Krampus a go. You’ll be in for either a devilish treat or a monstrous trick.