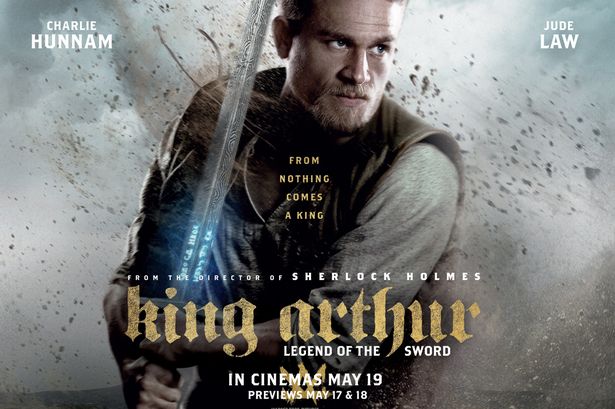 A fantasy epic is not the sort of film you’d associate with Guy Ritchie, a British director who made a name for himself with Lock, Stock and Two Smoking Barrels and Snatch, two high quality British gangster films. Alas, here we are and Ritchie has directed King Arthur: Legend of the Sword, a film that takes the loosely based on Arthurian legends very literally indeed.

Robbed of his birthright, Arthur (Charlie Hunnam) is raised the hard way in the back alleys of the city. However, once he pulls Excalibur from the stone, he learns of his true heritage and the legacy he must acknowledge, whether he likes it or not.

Ritchie’s film moves along with a confident swagger, mainly down to the way he decides to tell the story however, it’s not enough to stop King Arthur from becoming a bit of a mess overall. I found it entertaining enough but the film just doesn’t feel as if it has any meaning, particularly when you consider the potential that Arthurian legend has to become the next big fantasy franchise.

As much as I enjoyed some of the banter that the film offers, I can’t help but feel as if Ritchie was just playing it for laughs instead of trying to tell a worthwhile story. Tone down the banter and try to forge a narrative to connect with the audience would be my advice.

I wasn’t a big fan of how rushed all of the action sequences were either, choppy editing and some video game level visuals towards the end of the film really making me question the budget of this film. There’s a training montage halfway through where Arthur must take on a number of creatures which would have been pretty good had it not have been edited so badly. It’s near impossible to tell what the hell is going on.

Coming to the performances, King Arthur: Legend of the Sword has some serviceable performances at its disposal, mainly from Jude Law as the villainous Vortigern and Djimon Hounsou as Sir Bedivere. Charlie Hunnam, who I’ve always been wary of, does a decent job as Arthur, actually suiting Ritchie’s dynamic rather well. There is a cameo from David Beckham that doesn’t ruin the film at all but it certainly goes down as one of the worst cameos I think I’ve ever seen. Why let him play a supposedly intimidating character when he possesses such a high-pitched voice?!

It’s no secret that King Arthur: Legend of the Sword has bombed at the box-office, looking set to lose Warner Bros. around $100 million. Guy Ritchie has to take a large slice of the blame as he continues to stray away from the quality of his first two gangster films but maybe it’s partly down to the fact that fantasy epics just find it much harder to find an audience.