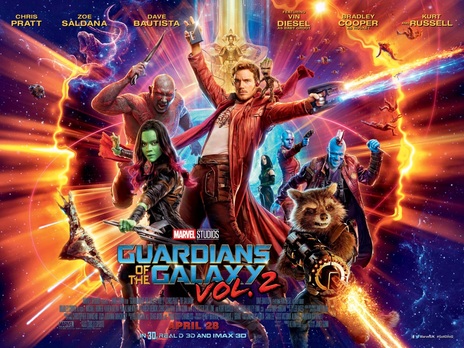 Three years ago, Marvel Studios and James Gunn introduced us to the Guardians of the Galaxy, a superhero team of outcasts and misfits who resembled more of a dysfunctional family than a cohesive unit setting out to save the galaxy. It’s safe to say the world fell in love with them right there and then, and now they’re back in Guardians of the Galaxy Vol. 2, the fifteenth film in the Marvel Cinematic Universe.

With the Guardians of the Galaxy, consisting of Peter Quill (Chris Pratt), Gamora (Zoe Saldana), Drax (Dave Bautista), Rocket (Bradley Cooper) and Baby Groot (Vin Diesel), renowned as heroes and hired to defend the galaxy, it’s not long before they find themselves on the run again. The trials and tribulations they face along the way pushes their relationships to new limits, all while Quill discovers the truth behind his parentage.

While others moan that the MCU is becoming quite tiresome, I can’t help but feel that it seems fresher than ever, particularly when they can break away to something as different as Guardians of the Galaxy Vol. 2. While it may not spring as much of a surprise on its audience as the first film this sequel doesn’t try to be a carbon copy, exceeding any expectations I had going in.

Going from one of Marvel Studios’ biggest gambles to one of their most profitable properties  is some achievement for Guardians of the Galaxy, and a lot of the success they’ve had has to go down to James Gunn. Gunn’s work on the first film drew a lot of Star Wars comparisons with the whole space opera ideology and in Guardians of the Galaxy Vol. 2, Gunn has made his Empire Strikes Back, with a strong sequel full of adventure, fractured relationships and a narrative that even comes with the father/son elements.

The film is much funnier than its predecessor, the jokes coming thick and fast, with Drax and Baby Groot getting the lions share of them, and Gunn really does knock it out of the park with both the visual and verbal pop culture references. That doesn’t mean the film’s narrative is sacrificed in any shape or form mind, Guardians of the Galaxy Vol. 2 going on to become one of the more personal and emotional films within the MCU.

One of the best things about the first film was the awesome soundtrack the film played out to. Like I’ve said already though, this isn’t a carbon copy so they don’t just pick random songs because they sound cool alongside an action sequence. The songs really do excel the film at times, Come A Little Bit Closer, Father and Son and The Chain being the stand-outs this time round. Oh, and Mr. Blue Sky deserves a special mention for playing over the best opening title sequences ever, and you’ll find it hard to disagree when you see it for yourself.

Coming to the performances, Guardians of the Galaxy Vol. 2 sees the fine ensemble cast return along with the addition of some very welcome new cast members. Chris Pratt leads the cast with copious amounts of charisma as Peter Quill embarks on a journey into his parentage, Zoe Saldana really does hone in on the fierceness of Gamora whenever she feels like it, Dave Bautista is, once again, hilarious as Drax, his laugh being one of the most infectious you’ll hear in any film and the stellar vocal performance from Bradley Cooper as Rocket is one of the highlights of the film.

Michael Rooker and Karen Gillan return as Yondu and Nebula respectively, getting more to sink their teeth into this time round and each of them provides the film with some of its more prevalent heartbeats. There’s also the new additions to the cast that come in the shape of Kurt Russell as Ego, a cosmic being and Quill’s father, and Pom Klementieff as Mantis, Ego’s empathic assistant. Russell just oozes the same charisma as Pratt so no surprise they seem to go hand-in-hand as father and son, and Klementieff does a great job in selling the innocence of Mantis as well as showing fine comedic qualities, mainly in her scenes alongside Bautista.

As expected with these big budget superhero films now, the visual effects look stunning and in the case of Guardians of the Galaxy Vol. 2, they play a major part in making these films feel so detached from the rest of the MCU. The vibrant colours add even more energy to the already electric action sequences, turning the film into even more of a thrilling ride in the process.

I could honestly sit and type for hours on end regarding how much I loved Guardians of the Galaxy Vol. 2 but rather than do that, I’ll just go and see the film again and again because this film has so much to give. I’m certainly hooked on a feeling again and I’m sure it won’t be long before the rest of the world follows suit.