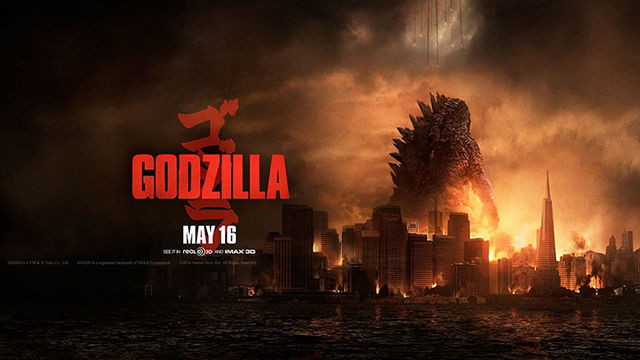 Cinema’s most recognisable monster ever has stomped his way back on to screens around the world and in all honesty, he has never been bigger or better.

Totally eradicating every single memory of Roland Emmerich’s 1998 effort, Godzilla gets another reboot but this time it is not just a 120 minute assault on your senses.

As soon as it was announced that Gareth Edwards would be directing Godzilla I was fully confident that he would do the King of the Monsters justice. After all, Edwards’ only previous feature film was the impressive Monsters. If he was able to produce that quality with such a small budget, expectations were raised with the higher budget that comes with a film like Godzilla.

After an accident at a nuclear power plant, Joe Brody (Bryan Cranston) tries to uncover the truth about what happened that day. Studying the seismic activities that occurred and making connections to similar present day activities, he finally finds out the secret that was kept from him all of those years.

It wasn’t an earthquake. It was something much worse.

When two MUTOs (Massive Unidentified Terrestrial Organism) are accidentally released on Earth and with humankind completely defenceless to the threat, Godzilla awakens and engages in a battle to restore balance on Earth.

A film about a monster waking up to fight two other monsters is a film that could easily become a daft spectacle, much like Pacific Rim last year. Gareth Edwards had his work cut out in keeping a degree of sensibility to Godzilla but he pulled it off superbly.

Edwards takes much inspiration from classic Steven Spielberg blockbusters such as Jurassic Park, Jaws and Close Encounters of the Third Kind to build suspense and give the audience a real sense of awe for when Godzilla is finally revealed. It is a rare thing nowadays to see a director hold back the main attraction for so long.

One of the most impressive scenes is the airport confrontation between Godzilla and one of the MUTOs. We have already seen the MUTO in full but Edwards teases us with glimpses of Godzilla’s tail and spikes on his back. Godzilla is what everyone wants to see and Edwards finally reveals him to us in an expertly crafted sequence that starts with a foot stomp before the camera scales up his entire body to his head. Then came the iconic roar. Godzilla was back.

Even when you thought an almighty monster showdown was about to happen, Edwards cuts to TV coverage of the fight. It was a clever way of teasing what was to come later on.

Let me tell you when we finally get to see Godzilla and the MUTOs fight it is well and truly worth the wait. They do battle in a finale that once again sees San Francisco, after X-Men: The Last Stand, Pacific Rim and Rise of the Planet of the Apes, take another battering.

Edwards brilliantly delivers on spectacle and one of my favourite moments was when Godzilla uses his atomic breath for the first time. Again the suspense leading up to it is perfect. I had to stop myself from letting out a scream in the cinema. This is what Godzilla is supposed to look like, take note Roland Emmerich.

Godzilla has quite an impressive cast at its disposal. I liked Bryan Cranston’s performance as a paranoid scientist searching for the truth but ultimately felt the fate of his character was a little rushed. Aaron Taylor-Johnson as his son, Ford Brody, is a bit one-dimensional but he does do a good job in some of the more tense scenes of the film.

Ken Watanabe seems to always bring a wiseness to any film and it is no different here in the role of Dr Ishiro Serizawa. My only complaint about the cast was that I felt Elizabeth Olsen as Ford’s wife, Elle, was mistakenly underused.

For a film with so much suspense, there needs to be a soundtrack that fits the bill. Alexandre Desplat in this case has done a fantastic job. It has a classic monster movie feel to it and it really adds to the whole experience.

I mentioned the suspense in the build up to Godzilla’s reveal earlier. Listen to the last thirty seconds of the track ‘Airport Attack’ on the soundtrack and imagine that accompanying the camera scaling up Godzilla’s body. It is just magnificent.

Godzilla is a fine example of a summer blockbuster that the rest of Hollywood should duly take note of. If you respect the source material you can work wonders, Godzilla is how you make a monster movie!